We have 111 guests and no members online

Yet you do not even know what tomorrow will bring. What is your life? (James 4.14)

On 30 August 2019, three brothers of the Order of the Holy Cross, an Anglican Benedictine Order, arrived at the Volmoed Retreat Centre near Hermanus in the Western Cape Province of South Africa, having left their monastery near Makhanda (Grahamstown) in the Eastern Cape Province with a truckload of bibles, breviaries, books, icons, statues, furniture, and a dog.

A brief history of the Order of the Holy Cross

The Order of the Holy Cross (OHC) was founded by Fr James Otis Sargent Huntington in 1884 in New York City, as an order of missionary priests who worked mainly with poor immigrants and for social justice. OHC soon developed a particular focus on education, including the founding of schools for poor children. In America, OHC has founded St Andrews School in Sewanee, Tennessee, and Kent School in Kent, Connecticut. OHC has also been involved in Africa since the early 20th century, with a foundation in Bolahun, Liberia, where the Order started St Mary’s School. This monastery sadly had to close in the 1980s due to the civil war there.

Desiring to continue its presence in Africa, and at the invitation of Archbishop Emeritus Desmond Tutu, OHC founded Mariya uMama weThemba Monastery near Grahamstown in South Africa in 1998. The monastic community soon started an after-school programme and a scholarship fund, for the children of farm labourers in the vicinity of the monastery. However, one of the major problems identified in education in South Africa is a poor foundation phase, and so we decided to start a foundation-phase school that would cater for Grades Reception to 3, and thus Holy Cross School was begun in 2010.

Over time, and as society changed, OHC became more Benedictine in spirit and charism and, with the encouragement of the American Camaldolese, with whom the Order is in a covenant relationship, OHC officially became Benedictine at its annual Chapter in 1984, one hundred years after its founding.

As Benedictines, we were invited to join BECOSA (Benedictine Communities of Southern Africa) soon after our arrival in South Africa. This has been a most valuable resource for us as a community. It is not a well-known fact that there are monastics in the Anglican Church, so it is very important and helpful to us to be part of a wider monastic family. Through BECOSA, we have been introduced to the Monastic Formator’s Programme, which five OHC monks have attended from South Africa over the years. We have also, through BECOSA, been participants in various programmes and courses made possible by the generosity of AIM. This is probably an article on its own; however, it is also a good opportunity to say, “thank you”, again! 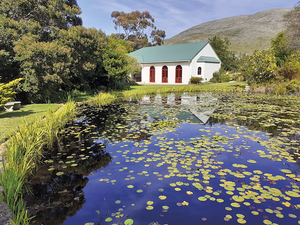 The Volmoed Retreat Centre came about in the early 1980s, during the height of apartheid in South Africa, from a common vision of Bernhard Turkstra, then a hotel owner, and Barry Woods, an Anglican priest, to have a place that is overtly Christian, yet where people of all races and faiths could find safety and welcome for healing and reconciliation. They eventually found a farm called Volmoed (an Afrikaans word meaning “full of courage”), from its origins as a leper colony in the 18th century, and a faith journey started in a wonderful place that has borne much fruit over the years.

The residential Volmoed community consists of a few retired couples who have all been to a greater or lesser extent involved in the day-to-day business of running Volmoed. The retreat centre is managed by a dedicated team of staff under a board of trustees, not all of whom are resident on the property. To complete the circle for the Order of the Holy Cross, Bishop Desmond Tutu also happens to be the current patron of Volmoed.

So, what brought the monks to Volmoed?

Soon after its inception, Holy Cross School had been expanding by a grade a year. It had become clear that the school should continue to expand, beyond foundation phase and into a fully-fledged primary school. Owing to the building layout on the property, the cheapest and most sensible option was to convert the nearby monks’ enclosure into extra classrooms for the additional grades.

Initially, the monks moved into part of the monastery’s guesthouse complex, but this soon seemed unsustainable. We then started looking for alternative accommodation and, because of previous contacts with the Volmoed community, we asked them to help us with possibilities in the Western Cape.

Part of the ethos of Volmoed is to have a prayerful presence at all times. This had been offered by Fr Barry Woods until his death in early 2019. So, when we enquired about possibilities in the Western Cape, instead of pointing us to other options, they invited us to come and live alongside them as a prayerful presence.

Well, as they say, the rest is history and so the Priory of St Benedict at Volmoed came into being. As can be expected, to move from a fully autonomous monastery into an existing and well-functioning ecumenical space offers a particular set of challenges and opportunities.

I have talked about Volmoed as a place of healing and reconciliation, so this is of itself a very vibrant ministry. Volmoed has relationships with various local and international organisations and communities dedicated to peacebuilding and reconciliation. One of those is the Community of the Cross of Nails at Coventry Cathedral.

Through the Volmoed Youth Leadership Training Programme (VYLTP), there is also a lively relationship with the Taizé community in France. VYLTP is a nine-week residential programme, after which one or two young people who have shown themselves suitable are chosen and sent to Taizé for three months to work in their volunteer programmes. 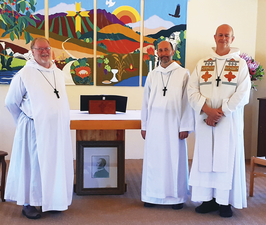 For worship, Volmoed has a chapel complex with a large main chapel, smaller sanctuary chapel and, on the lower level, several other rooms. Those rooms and the sanctuary are for our use. The rooms on the lower level we are using as a scriptorium, an office, and a small chapter room.

We follow our daily monastic Horarium and are quite often joined by members from the Volmoed community and/or guests. Our Sunday Eucharist is often attended by quite a number of locals who do not feel particularly connected to a local parish or congregation.

Volmoed has been offering an ecumenical communion service on Thursday mornings for the past several decades and these have proved to be very popular with the wider Hermanus community. The monastic community has been asked to lead the service on the last Thursday of every month, and we have used this opportunity inter alia to introduce the congregation to various kinds of chanting (via YouTube) which has helped to settle people down and bring them into a fuller sense of quiet, to the appreciation of a number of people, and not least the monks! These Thursday Eucharists have also introduced several Sunday attendees to us.

There are many other organisations and people in this area that we have either met or hoped to meet, with whom we could forge relationships and ministries. Sadly, though, for the major part of our time so far here at Volmoed, South Africa, and the rest of the world for that matter, has been in a state of lockdown or other restriction due to the COVID-19 pandemic. Our hope is to pursue those potential
relationships as and when possible.

As a monastic community, we are grateful to God that we are in a position to offer spiritual direction, especially during these times. This ministry took off almost immediately after our arrival and has hopefully made some difference for some people. Many people are really struggling with not being able to be present when loved ones die, or not being able to be with those who are sick, or being alone while sick. On top of this, there is so much uncertainty and fear, often not helped by the news media. Nevertheless, on-line forms of communication have proved invaluable in this ministry, especially for those too far away to come and see us in person.

As James says, ‘yet you do not even know what tomorrow will bring’, in these uncertain times, we do not know a lot of things; however, in Christ, we know what our life is and we give thanks daily.