We have 75 guests and no members online

The Foundation of Vitorchiano in Portugal

The Foundation of Vitorchiano in Portugal

The Sisters of Palaçoulo, OCSO

We are writing to you from Portugal, where since October 2020 we have opened a new monastery, Santa Maria, Mãe da Igreja. For the moment we are living in the new house which will be the future guesthouse, waiting for the construction of the real monastery.

Here we have begun regular life and made the first steps towards organising productive work. For the moment we are making rosaries, selling booklets of prayers for children, prepared while we were still at Vitorchiano, and now we are beginning to produce almond biscuits. Our territory of 28 hectares, beyond the part destined for building, already has a plantation of nearly 500 almond-trees (the almonds to be used for the production of biscuits), and an orchard of various fruit-trees for the needs of the community and its guests. The guesthouse consists of eight blocks linked together to form a single building; it resembles a small aldeia, that is, it reproduces the characteristics of a village typical of this region. 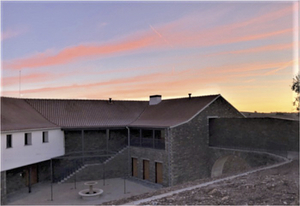 The outside of the guesthouse is partly covered by shale, to stress its similarity to the typical style of the neighbouring stone-built villages. We have set up a substantial part of the guesthouse as a real monastery: apart from the rooms which we use as cells, we have arranged spaces for the necessary services (laundrette, sewing-room, bursary, office for the superior). On the ground floor we have created the normal places: the little chapel serves as a monastic choir, the future reading-room is a scriptorium, a meeting-room, a chapter-room and of course a refectory and kitchen.

Thanks to the presence of an outside staircase which maintains a certain separation, we have set up part of the house for a few guests who already want to share our life of prayer. We are asking the Lord to bless us with some local vocations.

We are at Palaçoulo, about two kilometres from the village, near the frontier with Spain, in the fairly deserted frontier region of Trás-os Montes, from which young people emigrate; the few villages dotted around are generally inhabited by elderly people. The surrounding countryside has something unspoilt and unlimited; there are few houses and few farmers still at work. This means a broad sky, and it is amazing in this little Portugal to find oneself under a sky which follows the horizon unbroken. Nature here in the wide valleys has something unspoilt. A few eagles hover over the steep slopes of the River Douro.

From the logistical point of view our situation is pretty unusual. We live in a country of rich Europe and yet we find that we need to respond to the construction demands of a new-born world. Every day we are confronted by the absence of adequate structures and infrastructures and a definite inertia on the part of the municipal authorities who provide even the most elementary services only with difficulty. 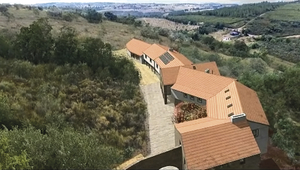 The stages of this fondation have been marked by a difficult experience: on the one hand it is a true miracle, and on the other hand it demands patience, tenacity in which we have to remind ourselves why it is worthwhile to move and risk constructing a grain of monastic life in our secularised and sceptical Europe. It truly has a touch of the miraculous that the generosity of the parishioners of this place was willing to grant us part of their land (our property at the moment is composed of 32 previously different lots). Touching is also the generosity of the bishop and the local parish priest who have woven relationships, organised meetings and help, and contacts to bring Cistercian life back to this country. But also patience and tenacity, for we have also encountered multiple bureaucratic difficulties with the lack of funds and the lack of interest of certain large enterprises which have obliged us to pay for connexions of electricity and water, to install and manage drainage, to connect up the internet (at the moment we depend on a satellite system) and also the lack of an adequate road into the village. We have built this road partly ourselves, and it will now be completed with beaten earth and gravel, thanks to a great effort on the part of the municipality. At present we are working on the project of the monastery, an enterprise much more demanding than the guesthouse, both because it has been conceived to house forty nuns and because the building is intended to include workrooms.

The building was conceived to fit harmoniously into the natural environment, and be adapted to the hilly nature of the terrain. For this reason we planned a division of buildings over several stages. A traditional monastic plan envisages a cloister in the centre, the heart of the house. Around it open other developments in which the life of the monastic community can proceed. The church, duly oriented, is positioned on the high ground so as to be visible from afar. The workrooms are on the lower floor with the local crafts, while the upper floor will be used for the dormitory and the infirmary.

Why are we here? Why did we leave our monastery where we were happy in the large community which we love? The answer is simple enough: the Bishop of Braga, who believes in monastic life and its capacity for witness and Christian attraction, invited us to his diocese. Our present community, composed of ten sisters, comes from the monastery of Vitorchiano, which in fifty years has founded eight monasteries of which the first was in Tuscany. Vocations at Vitorchiano have been numerous and there was no room for everyone. After that foundations were made in countries where there had not yet been Trappist monasteries, Argentina, Chile, Venezuela, Indonesia, the Philippines, the Czech Republic and now in Portugal. In addition we have helped a monastery in the Democratic Republic of the Congo by sending five sisters to help the frail local community. In each case the initiative came not from ourselves, but always from a bishop who invited us, or from others who invited us to make a foundation in their diocese.

Why did we make all these foundations, often in difficult conditions either from the economic point of view or from other difficulties? Because such a mission, the fact of bringing Christ to others, is characterisic of all Christians, and especially religious institutes and consecrated people whose charism has been officially recognised by the Church. Monastic life, which goes back to the first centuries of Christianity, and in the course of the centuries has developed in different forms, contributing equally to the rise of civilisation and culture, has always encouraged and favoured mission to make Christ known through the witness of a life of prayer, fraternity and work. This witness has been received in places and cultures very diverse. It has been enormously widespread, granted the difficulties and dramas implied by human history.

In addition to the mission and despite the vow of stability which ties the monk to his own community, monasticism has always promoted xeniteia, that is, the fact of going to bear witness to Christ in a foreign land. There the conditions of life, the language and customs make such witness difficult and painful. Thus the missionary monk and nun more and more resemble Christ who suffered and died for us.