We have 77 guests and no members online

Since 2014, a programme has been running for formation of monastic formators of French-speaking countries. These sessions take place every alternate year in France and Belgium. The spirit of ‘Ananias’ consists in a magnificent dive, centred on the Word of God and lived out in a fraternal body. Such is the proposition offered to monks and nuns already mature in their community experience.

Who takes part? The sessions are aimed at Benedictine and Cistercian monasteries of the French language on all the continents. Applications are welcome from monks and nuns who already have a monastic formation and a certain experience of community life, brothers and sisters who are thought to have the capacity to take on responsibility.

Numbers: 20-25. It is important to achieve a balance between monks and nuns, but this is a principle not always respected in practice.

How? The life and the progress of the sessions

• Participants are invited to create among themselves a real fraternity during their three months of life together. This is the necessary basis of everything that happens. The sessions are about living, not simply information.

• The first two or three days are devoted to exchanges, sharing each one’s path of life, under the guidance of a skilled moderator. Each one is invited to formulate his or her expectations and questions.

• The participants are welcomed into different monasteries. In 2018: La Pierre-qui-Vire, La Coudre (Laval), Martigné-Briand and Bellefontaine.

• There will be pilgrimages and excursions.

• A senior (at La-Pierre-qui-Vie this was Dom Cyprian) accompanies the group during the whole period of three months. This is fundamental to achieve unity.

• Complementarily, Pastor Pierre-Yves Brandt, professor of religious psychology at the University of Lausanne, well versed in and warmly attached to monastic life, plays his part. He has come three times to visit the group for some days.

• The teachers are chiefly monks and nuns. These are joined by several lay teachers or professionals in one or another discipline.

• The objective of the whole course, and also of the reflection-groups, is to offer a rounded understanding of our monastic life. It aims to improve the acceptance of responsibility for formation and other responsibilities with respect to the brothers and sisters and to the outside world. Since the last session we have put a special accent on the personal accompaniment given to each participant.

• The stages occur in four monasteries. By a custom which has proved its worth, we start in La-Pierre-qui-Vire. Each stage develops a fundamental aspect:

The Word of God, pivot of our lives, centred on the paschal mystery.

Handing on the Tradition, the time to revisit the Rule and the great fundamentals, obedience, self-emptying and poverty, spiritual accompaniment.

Affections and celibacy, a more personal stage, which touches what is most profound in each participant, personal strengths and weaknesses.

The common life. The Church as a brotherhood, inculturation, fraternal life, vows. We are introducing a module on total ecology.

We stress the value of the excursions at each stage. 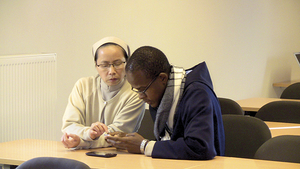 The three months form a single whole, that is, we would not envisage an ‘à la carte’ application, in that the proposal is specifically a course of formation, and is global. It is a matter of formation, not merely acquisition of knowledge or a method. This presupposes a personal investment in its length and in the stability of the group.

Knowledge of the French language is a requirement on which we must insist. Experience has shown that the brother or sister can truly profit from these three months only with sufficient mastery of the language, even if this requires a supplementary investment.

The most recent session took place from 6th September to 28th November 2018, attended by nine nuns and six monks. This group was accompanied by Dom Cyprian of La-Pierre-Qui-Vire, who listened to each participant and oversaw the organisation. He will perform the same service for the next session, which we still hope to maintain.

The composition of the group was markedly African ; sixteen of the participants came from African countries. Nine sisters were from France (but four of them were not French in origin, and indeed two were African). We might add that the sole French monk was from Latrun in Israel. Interculturality was no mere theory. This balance ensured that there were most enriching mutual discoveries, though the inevitable difficulties must not be forgotten, the sort of misunderstandings which any shared life generates, especially when the contexts are so diverse. The strength of the group lay in its fraternal spirit which showed itself from the first day onwards. Sure of building on rock, the brothers and sisters did not hesitate to speak frankly to one another when tensions could have harmed the fraternity. This aspect struck us and gives us pleasure to mention. There was never any doubt that dance, singing and rhythm gave colour to these months. It goes without saying that the host monasteries generally were only too delighted to enrich their liturgical celebrations with this joyful novelty.

As for the content, we retained all that had been experienced in the two previous sessions, with a special accent on personal accompaniment. The richnes of the excursions, one for each stage, also deserves mention:

• Taize, with on this occasion the possibility of spending two days on this hill among the young people, and welcomed so fraternally by the brothers. A visit to Cluny provided a glimpse of monastic history of France.

• The Orthodox monastery of St Silouan, where the brothers and sisters participated in the eucharistic liturgy and felt a little more keenly the pain of the division of Christians since we could not receive communion together. We did, however, receive a very warm welcome.

• Ligugé, the monastery of St Martin, the most ancient abbey known in Gaul, founded in the fourth century by St Martin. The return journey took us to the Abbey of the Holy Cross, close by, which possesses a relic of the true Cross, which we venerated before Vespers.

• Candes, where St Martn died, then the Abbey of Fontevrault, now a cultural centre – another fine slice of monasticism to discover.

At the beginning of 2020 we undertook the preparation for the session of 2021. Because of the medical situation it seemed to us more prudent to postpone it till the following year. So the next session will take place from 7th September to 1st December, 2022.