Sessions in the Monastery of Mvanda

Formation Sessions in the Monastery
of Mvanda (DRC)

The monastery of Our Lady of Mvanda was founded from Our Lady of the Star (Parakou, Bénin) in 1991. In 2000 the Abbey of Vitorchiano sent five sisters to take up the responsibility of the development of this community. Mvanda was raised to be a simple Priory on 15th February, 2010.

For some years a need had been felt at Kikwit to offer to young candidates for the monastic life or the religious apostolate the possibility of a year of recollection and of pre-formation. In fact the formators of different communities find themselves increasingly confronted with the problem of a lack of solid foundations, both from the viewpoint of the intellectual and personal structure of candidates. Because of this, formators find themselves obliged to focus on aspects which should have been acquired beforehand, such as knowledge of French, a minimum of self-knowledge, basic catechetical formation, etc, instead of concentrating on purely monastic formation. Many have found this fiercely discouraging. From the viewpoint of the candidates for formation the risk is genuine of growing up with human and spiritual lacunae which are artificially filled by accumulation
of knowledge, resting on a basis which risks being swept away by the first crisis. 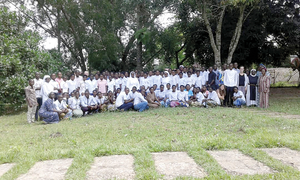 The project taken up by the Trappistine nuns of Mvanda took a concrete form in March 2014. It was then that construction began of a centre destined to accommodate these activities. On 19th March 2014 a first planning conference took place in the presence of Dom Jean-Pierre Longeat, president of AIM, Mother Anna-Chiara, OCSO, of Mvanda, Sister Patrizia, OCSO, Sister Catherine-Noel and Brother Benedict (Tiberiade). The school is open to young people who live in community for at least one year as aspirants or postulants. The first year of study began on 15th September 2014 and ended on 19th June 2015. The time of formation is arranged in the mornings from Monday to Friday. A programme runs over three trimesters in a progression of an approach to the person:

• First trimester: History and my history
• Second trimester: Self-knowledge for self-construction
• Third trimester: An alliance with the Bible.

Courses have also been set up on geography, biology, history, French, etc.

For some years the Priory of Mvanda has organised also sessions for postulants and novices of religious congregations in the region, including monasteries.

This project of creating a school of formation for religious was born from a need felt locally for proposing for young monks and nuns a programme of formation more specifically oriented to the aim of their contemplative vocation. At the same time, by opening to other congregations who were prepared to send their young people, we hope to correspond to the appeal formulated in that fine document CIVCSVA on ‘the contemplative dimension of the consecrated life’ and to give also to young religious and apostolic religious a firm basis for their mission. It is clear that we have been inspired by the experiment made in Belgium and France with the Institut Théologique Inter-Monastique (ITIM) and the Studium théologique Inter-Monastères (STIM). However, we are trying to adapt our programmes and the level of the courses to our own African reality and rhythm.

We do not intend to offer our young people a formation of the type given by universities – that is what universities are for! If we cannot form saints either (that comes only from God’s work) we would at least hope that this may be the desire of our young people. Through this balanced human and theological formation our religious should fall deeply in love with Christ and his Church. Our approach attempts to allow our young people to ‘taste and see how good the Lord is’. A rigorous approach, rooted in Scripture and Tradition, careful to impart the teaching of the Church intelligently. This must not simply be repeated but should be assimilated for com-prehension (taking into oneself) and re-birth, an intimate experience of God and the Church.

The teachers aim to impart not so much a knowledge as a method of working. They are required to give the students a copy of their course and, as far as possible, an up-to-date bibliography. The first two cycles (and especially the first) are based as far as possible on Scripture, the Catechism of the Catholic Church, Vatican II and the more recent papal encyclicals. In fact we offer two cycles, The first is aimed at aspirants, postulants and novices or young professed. The second is intended for simply or solemnly professed. The future will show whether a third cycle should be envisaged.