We have 219 guests and no members online

The Sisters of Encontro (Brazil) 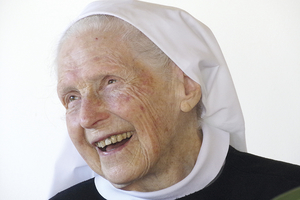 Madre Marie-Chantal (Marguerite) Modoux was born at Promasens, Fribourg, on 21st February, 1919, the eldest of four girls. She loved the mountains, the sky and also the sea. A born educator, she attended the École Ménagère and then worked as a tutor to a diplomatic family confined to the Vatican during the War. The Swiss Guard certainly took notice of ‘la bella rossa’ – she told us so herself. After that she worked in Spain. A female friend, an oblate of Ligugé, lent her Dom Marmion’s book, Christ, the Ideal of the Monk. When she finished reading it she closed the book and said, ‘It is that or nothing’. To discover where it should be, she contacted three monasteries and it was the response of Mother Thomas Aquinas of the monastery of Our Lady of Bethany in Loppem near Bruges in Belgium which won her. Everything was prepared for her to enter Bethany when Madame Modoux fell ill with cancer. Marie-Chantal, as the eldest, decided to abandon monastic life to look after her mother. However, the doctor said, ‘Your mother will live for many years. Follow your own path.’

On 16th October, 1953, she entered Bethany, and on 4th June of the following year began the noviciate with the name of Sister Marie-Chantal. Sister Anne Farcy, who would later come with her to Brazil, was the eldest of the white veils whom she must obey. Sister Marie-Chantal made her first profession on 21st August, 1954, and three years later solemn profession, on 23rd August, 1957. Her mother, who had gone into a depression at the moment of her entry to the monastery, was present at Bethany for each important moment. On 29th November in the same year Madre left for the Congo, completing the community founded by Bethany at Kikula, Likasi, where she lived for six years.

In 1960 Pope John XXIII made an appeal for contemplatives for Latin America, and Madre, whose heart was always attuned to the Church, said at a community meeting to Mother Columbe (at that time prioress of the monastery of Bethany and president of the Congregation), ‘I hope Bethany is going to respond.’ When she was on holiday in Belgium she heard that she had been chosen to be part of the group of founders for Brazil, and as superior. Her return ticket to the Congo was cancelled! Madre knew Spanish, and would have liked the choice of the Congregation to be for a country where Spanish was spoken, but God had other plans.

The founding group, Mother Marie-Chantal Modoux, Mother Marie-Claire Willcox and Mother Maria Stoll, set off by boat on 25th November, 1963. They arrived at Santos in December and then at Curitiba at the beginning of 1964. The Belgian Missionaries of the Sacred Heart (MSC), who had participated in the discernment for the place of the foundation, had a parish at Pinheirinho, and they had found someone who would sell them some land in this area. It was a rural zone with no electricity, no running water, no telephone, etc. Everything still remained to be done. Each sister had found lodging among the religious in Curitiba to begin to manage the Portuguese language. As soon as the second group arrived, the construction of the future monastery began, wholly in wood, like the neighbouring houses. Our sisters followed the ‘Cenfi’ at Petropolis, a course of six months organised for foreign missionaries by the Episcopal Conference, an introduction to the history and culture of Brazil and above all the Portuguese language. It was based on rote-learning, not easy for adults but effective. From this era of the ‘Cenfi’ the sisters knitted faithful friendships with other missionaries, American and Canadian Benedictines, and above all Dom Robert Ogle and Dom Donald Macgillivray.

The canonical erection of the monastery on 1st November, 1965, was marked by the first visit of Mother Colombe. The beginnings were heroic, the long office of Vigils in the evening, with six psalms to each nocturn, the washing and ironing for the community and for the sacristy of the Sacred Heart Fathers, a daily bus journey of 3 km into town to the post-box, a single well which often served also to store the food. It was a life of poverty, like that of the first monks.

The post was slow at this time of a military dictatorship, with a ferocious censorship. How much they underwent without being able to share it with the founding monastery! It was the time after the Council, a time especially difficult for the religious and priestly life. How many religious and priests were listened to, helped and directed on their way by Madre! She had the gift of listening and of empathy. Her memory enabled her to retain the faces and names and the content of each meeting. People felt themselves to be understood and welcome; they frequently returned, feeling themselves loved and treasured. She kept up bonds of friendship by a very full correspondance, often sleeping no more than four hours a night.

Madre was also the formator of any vocation that came. Her discernment, her firmness, allied with the gentleness of her accompaniment in passing on monastic values, helped everyone she received to grow. Her courses on following Christ, her conferences to the community and her way of correcting faults were unforgettable.

In the 1980s, after the era when liberation was very much in vogue and almost unintelligible to contemplatives, there came a turning-point. Pastors discovered lectio divina, the need for a time of withdrawal to pray and evaluate activity, and the community received three requests from other dioceses who wanted to have a monastic community. Madre, always open to the needs of the Church, decided to make a foundation. At that time there were twelve of us. ‘Everyone must make her contribution’, she said. In the spirit of our Congregation the community chose to answer the request of the poorest, most remote place of all, a real ‘frontier-post’, and in 1989 the monastery of Agua Viva was founded in Amazonia in the prelature of Itacoatiara.

In 1998, a canonical visitation decided that our monastery of Encontro should be dissolved. Pinheirinho had become too crowded, too violent and too noisy. At the age of 80 Madre set out to find another property, build a new monastery, sell the old and start again in another country region, with mountains, a fine view, not too far from Curitiba and especially only 50km from Trappist monks. That brought the community at Mandirituba to sing ‘O Emmanuel’ on 23rd December, 1999. Madre remained in charge of the priory till 2000. As the crowning of the foundation, she had the joy of experiencing the dedication of the church of the new monastery in 2008.

The slogan of Madre was ‘The joy of the Lord is our strength’ from Nehemiah 8.10. She was very discrete about her spiritual life, never herself speaking about it. But there were signs, as for example her serene and luminous countenance, her joy, her faith, her presence at all the Offices, at all the works of the community, her availability to all who sought her. After giving up her charge as prioress she became a simple sister in the community, asking a blessing, asking the permissions normal to monastic life, presenting an account if she went out. Her Lenten schedule showed her great longing to know the Lord more and more, to live each day as if it were her last. 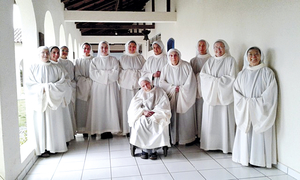 Madre was very jealous of her autonomy, but advanced age had arrived with its limitations. She lost her hearing, then little by little her vision, her ability to occupy herself on her own. The vigour of her life sometimes blinded her to her limitations, and she could not be left alone, day or night. This was a blessing for the community since each member in turn had a presence with Madre. Her great trial was not to be able to read, she who had built up our library, who read all the reviews, who always followed the life of the Church with such great interest. She never complained. Her only word was ‘Thank you’.

It the end we perceived a certain night of faith, a certain pain, her brow a little wrinkled, but always calm. The community prayer was for her and with her. Madre deeply loved her biological family and her monastic family. She had been a great nun, a woman profoundly free. She was filled with a presence, wanting nothing but the joy of the Lord, and at the same time she was like a child, marvelling at everything.

She gave us a love of the Divine Office, of monastic life, the joy of praising, the spirit of Bethany, that is, openness, love of the Church, disponibility to mission, simplicity, zeal for fraternal community and welcome. Her presence was a source of unity, even when she was absent, too tired to be able to come either to refectory or to recreation, she followed the life of the community and asked the subject of meetings or reading in the refectory. We were with her in her humiliations, her moments of sorrow. On the final night we were around her, and renewed our profession as we sang the Suscipe together.

Her welcome had created a reservoir of friends. We received more than three hundred message of condolencce. For all these messages we thank you, in the sure knowledge that Madre is interceding for each of you from heaven.