We have 185 guests and no members online

Monastic life in Vietnam is full of vitality. There are 21 monasteries including two of the Congregation of Vanves, six of Benedictines of Subiaco-Monte Cassino, three of Cistercians of the Holy Family, nine of Cistercians and one of Bernardines, so six monasteries of women and fifteen of men, without counting dependent houses or foundations being prepared.

Every two years a three-day meeting on formation occurs for the Vietnamese Benedictines and Cistercians, comprising the study of a document of the Holy See on monastic life or the consecrated life in general. Initial formation is of course undertaken for each monastery both among the Benedictines and among the Cistercians. Sessions for the formators occur regularly. The Vietnamese province of the Congregation of Subiaco-Monte Cassino organises permanent formation: each year the province has a session of one week on spiritual or monastic subects. Philosophical and theological formation takes place either in the monastery or at the major seminary or in a Studium (Franciscan, Salesian, etc).

The Congregation of the Holy Family has put in place a formation commission which meets regularly and follows initiatives in this area. The Congregation has internoviciate meetings for two or three days every alternate year, for monks one year, for nuns the other. Similarly, there are also meetings between the temporarily professed, and equally sessions for the solemnly professed of all the monasteries of the Congregation. The Congregation also has a studium for the study of philosophy and theology for the monks. 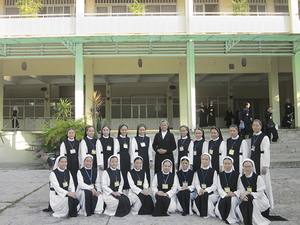 In 1992 for the first time courses of theology for religious were able be organised at Ho-Chi-Minh City, thanks to Mgr Paul Nguyen Van Binh (of the Archdiocese of Ho-Chi-Minh City). The sisters of the three Cistercian houses (Vinh Phuoc, Phuoc Thien and Phuoc Hai) live in a house at Ho-Chi-Minh City, fitted out in 2007 with the help of AIM. This year 24 sisters are studying, 15 in the third year of theology, and 19 in the second year. The place is used also for open sessions of various religious congregations. During the year the house is occupied by some 15 solemnly professed Cistercian sisters. The house serves also as a meeting-point for sisters on business in the city.

We should mention also that meetings are organised for those who are solemnly professed. There are sessions in the Congregation of the Holy Family for different categories of people, some of whom have a special responsibility, guest-masters and mistresses, bursars, librarians, elderly professed, mature professed, professed younger than 40 years.