We have 110 guests and no members online

Recently I was visiting a community of monks and during my stay I had the opportunity to participate in a community discussion. The subject of the discussion was the extremely original work of a Christian artist. The discussion was principally about his pictures, but there had also been the chance a few days previously to watch together a video on him, on his human and artistic career. The exchange among the brethren was very profound, since everyone had been personally deeply impressed by the witness of this artist. At the end of the discussion the abbot said in passing that this year, partly because of the situation created by the pandemic, there had been few moments of structured formation, such as invitations to scholars to give courses or lead sessions. He questioned what effect this had had on their continuous formation. As for initial formation, he was aware that it had not been possible to adhere completely to the ratio studiorum prescribed by the Order. This is a worry that I find shared by many superiors and communities, especially those which are small and fragile.

However, after the community discussion it was clear that this community had no lack of continuous formation, precisely because it had in the course of the years developed a fine culture of sharing, of dialogue, of listening and speaking. I was reassured that monastic formation is living and effective if it occurs in a well-worked field, a field which is prepared for sowing, for the seed to germinate, to grow and to bear fruit. Or rather, to make use of another image still more expressive in the matter of formation, if the community is disposed to be a clay well-mixed, well-watered, of a good consistency, allowing the potter to give it a fine shape, adapted to the use for which it is intended.

In short, when a community works at its own conversion, when a community forms itself as a filial and fraternal community, when it is, as St Benedict would say, a place of obedient stability – that is, of silence and listening, of conversatio morum, on the road of conversion and life-giving communion, everything contributes to the growth of the community and of each of its members to grow and develop so as to expand into the perfect shape of Christ, the beloved Son which the Father wills to impress on us by the gift of the Spirit. Only the community must accept to become a building-plot, to become a house, a home and above all a temple of the presence of God. Without that, even the best of courses and sessions by the greatest scholars and professors will not succeed in forming and developing a community and its members. 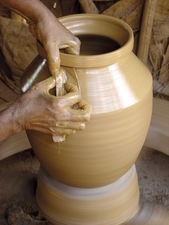 I know some small and frail communities which can no longer invite high-class formators from outside, but which are so united in humility and desire for conversion that every crumb of truth and beauty which comes from anywhere and by any means becomes a seed of formation and edification. Everything forms us if only we have a heart humbly open to the conversion which monastic and community conversatio offers us and which we need. This makes communities where the meditative heart of the Virgin Mary is obvious, wholly alert to miss nothing offered by its Spouse the Word. If this attitude is lacking, a community will derive no profit from the most frequent and well-directed formation. The best seed remains sterile if it falls not on well-prepared soil but on marble, no matter how precious and well-polished.

For any formation to be fruitful it is important not to neglect the humus. If you don’t work the soil you will not get the harvest you desire. This is the great wisdom of monastic formation : it begins from below in order that what comes from above as the Word and Spirit of God may find a welcome and openness, that is to say a liberty which seeks and desires it and opens the door when the Word knocks.

St Benedict learnt at the school of the Gospel and the Fathers that nothing tends the soil so well as community life. To live in community makes conversion truly formative. Without the guidance of a community it is easy to give way to the temptation, as old as original sin, to attempt to model oneself by one’s own hands. But one’s own hands succeed only in putting on make-up as we look at ourselves narcissistically in the mirror of our ambitions and vanities. By contrast, when we freely consent to allow community life and obedience to form us according to God’s design, then we slowly discover that we are being modelled at a deeper level of ourselves, so that the true gift of our lives bears its fruit.

In this sense the pandemic has been a great challenge for monastic communities. On the one hand, we, like everyone else, find means of formation shared at a distance which offer the most frail communities new means of formation. But this opportunity shows also its own limits: it promotes formative communication but not formative communion. On-line formation is excellent for informing ourselves, but it does not suffice to shape us. It is like learning the theory of pottery without soiling one’s hands with clay. Better still, it is like a potter showing the clay the gestures which would shape it, without being able to touch it. The clay still has to find hands which take it in charge and shape it. This brings us back to the need for a real community conversation which anyway has become particularly sensitive when confinement has obliged monastic comunities to live in real enclosure.

When in 2020 we were forced to cancel the Course of Monastic Formation, a month-long course which we have been holding at the Roman Generalate for twenty years, we questioned whether we should replace it by an on-line course. But, quite apart from the practical difficulties of virtually gathering together students from Asia to the Americas, it was clear to us that we could not reduce the formation course to mere lessons. It would lack the community dimension which allows the teaching to take root immediately in the real life of the participants, teaching them the complete dynamic of monastic formation which is not merely sowing, but also ground which receives the seed, not only a word but also the heart which needs to listen in order to live in communion.

Meditation on the first chapter of the Rule of St Benedict on the types of monks reveals that the real difference between the two good models of monks (cenobites and anchorites) and the two bad models (sarabaites and gyrovagues) consists in the choice or rejection of being formed by someone else. Cenobites and anchorites confide their desire for a fullness of life and sanctity to the hands of God and of a community guided by a rule and an abbot. By contrast, sarabaites and gyrovagues follow their own personal tendencies. This has haunted us ever since original sin; it is a refusal to entrust oneself to formation by the hands of another. All are clay, destined to take on a fine and useful form, but the former group allow God and the community to shape them, whereas the latter slide wherever they happen to be, passively accepting the formless form of the slope on which they are sliding. The former entrust their longing for life and joy to a path which is successful; the latter, confusing the deep desire of their hearts with an instinctive tendency, allow themselves to be guided by the tendency itself, which leads nowhere. For the instinctive tendency is a misshapen desire which is closed in on itself and renounces the infinite to which it is directed.

Monastic formation, like any human and Christian formation, is a serious question. At stake is not the perfection of knowledge, even practical knowledge, but the fullness of the life for which we were created by the Father, purchased by the Son and animated by the Spirit. It is for this that we receive the Body of Christ which is the Church, and the membership of a community which is granted to us so that the form of Jesus may become the substance of our life and of all our relationships.