We have 187 guests and no members online

The new monastery of Envigado

The new monastery of
Our Lady of the Assumption, Envigado 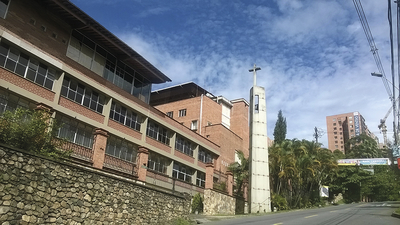 The Benedictine monastery of Our Lady of the Assumption was founded in 1954 in the Zúñiga quarter of the town of Envigado on the edge of the conurbation of Medellín. In its origin and for some years the monastery was semi-rural in its position and its socio-cultural identity. But urban development has profoundly modified this character. At present the community finds itself in a residential quarter of the town. Since its foundation the monks have given the complete priority of their care to the Benedictine College of Santa Maria. The community and the College have shared the same buildings, with one part for each.

Nevertheless, from the beginning of the foundation the monks lived in a place which was their own, but when the new College was built in the 1960s the monks lived in top three storeys of the new building. In the basement they set up a temporary chapel. This space had originally been envisaged as a garage for the school buses. The provisional arrangement lasted fifty years! 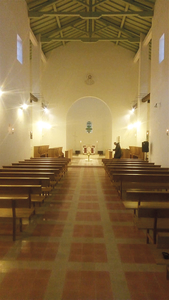 In 2011 the community started to feel an urgent need for a space which lent itself better to the common life and the regular observance, a little separate from the life of the school. At the beginning the idea was to move the monastery outside the town, but a canonical visitation advised the community not to move away but to re-order the earliest building of the foundation in the lower part of the property. At that time it was being used as a guesthouse. Thus the new monastery was built between 2016 and 2018 on the basis of already-existing architecture. The community moved into the new building for Holy Week of 2019, and on 22nd April the new church was consecrated.

This church is in the form of a Latin cross, orientated. There is a single nave eight metres wide and twenty-four metres long, crowned by a little apse for the president’s chair. The transept is 13 x 8 metres. In its centre is the monastic choir. Two small side-altars are placed on one side and the other, one dedicated to Our Lady of the Assumption and the other to St Benedict. The paintings of the Virgin and of St Benedict are the work of the Colombian master Gregorio Cuartas, at one time a monk of La Pierre-qui-Vire (France). The altar is located just below the entrance to the apse. On the ceiling of the apse is painted a Christ Pantocrator with its main lines in mosaic; the ambo is in the centre of the choir.

On the left hand side of the church is a separate bell-tower. In the first floor of the tower is located the Blessed Sacrament chapel, linked to the church by a vaulted passage. The remains of the deceased monks have been transferred to the second storey of the tower, in individual niches placed in the eastern wall. On the third story of the tower the monastic library is to be found, together with a workshop for restoring books.

As one can see, the church combines the Roman grand lines and basic plan with elements of Creol decoration typical of colonial churches (false beams in the transept, the colour of the timbers of the ceiling, walls whitened with chalk, decorative incisions in the fresh cement for the interior and exterior tympanums of the central door). In front of the church is a little cloister which includes the narthex, with a fountain in the middle of the patio. 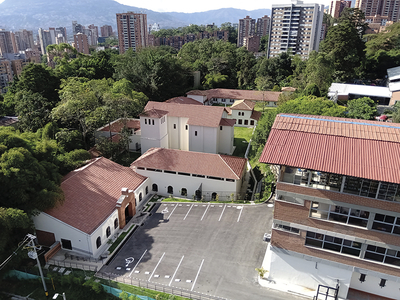 Aerial photographs show the new building as a whole. In the centre is the church, facing the closed courtyard. To the north the cloister with all the dependencies needed for the monastic community. To the south the porter’s lodge, parlours, a room for groups which can accommodate a hundred persons, the library and house for guests. All these spaces are gathered round another small wooded cloister.

The community chose to put the library in this exterior zone to allow guests and visitors who so desire to consult and read its riches, about which they are able to learn on-line beforehand. The guesthouse comprises eight rooms, all en-suite. The school and the monastery are separated by a high fence and a green enclosure.

The offices of the direction and administration of the College (which counts 1,000 students) are confided to a qualified lay team. The monks ensure the pastoral life of the school community (students, teachers, parents, auxiliary staff). Since 2015 the school has joined the network of Benedictine schools of the worldwide Benedictine Confederation. Participation in the meetings as well as constant communication with other Benedictine schools has contributed to consolidating a programme of education and catechesis in accord with the basic lines of monastic spirituality. 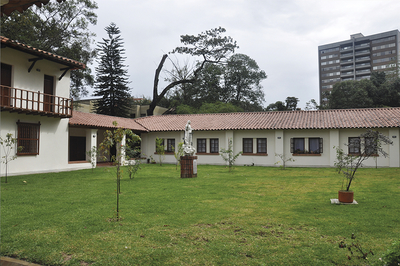 So the Abbey of Envigado is indeed an urban monastery with a school, located in a residential sector of the town. The separation between the space for the school and that of the monastery achieved by the new building has allowed us to continue the pastoral work for the school, but has provided the monks with greater intimacy for their community life. The architectural disposition of the new monastic area, the green spaces, which include also an orchard, all contribute to the harmonious development of monastic life. In the middle of the turmoil of a city and in the excitable atmosphere of a school of a thousand students, the Benedictines of Envigado share the life-ideals of all monks and nuns who follow the Rule of St Benedict, the search for God ‘under the guidance of the Gospel’. Thus they aim to make the monastery an island of peace and prayer at the heart of the city. 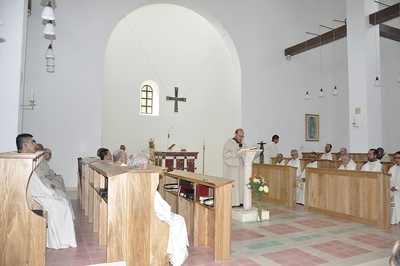 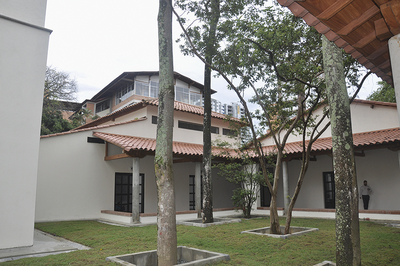 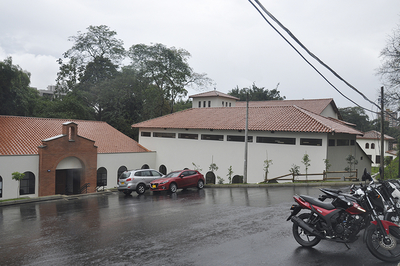