We have 536 guests and no members online

For a long time monastic communities throughout the world had been asking for some help for those called to work in the important area of formation. After some years in preparation the first Monastic Formators’ Programme (MFP) took place in Rome in 2002. The next programme is scheduled to run from March to June 2022.

The course is held in Rome where participants have the experience of being part of an international Benedictine family and have the benefit of instruction from some of the most respected monastic teachers of our time. It is run in co-operation with Sant’ Anselmo with the wholehearted support of the Abbot Primate of the Benedictine Confederation (OSB) and the Abbot General of the Order of Cistercians of the Strict Observance (OCSO).

The Programme is open to monks and nuns and sisters following the Rule of St Benedict who are either currently working in formation or preparing to do so in the future. For three months participants form a monastic community, studying and praying together, but with a sense of pilgrimage to special places of our Christian and monastic heritage including Norcia, Subiaco and Monte Cassino. The programme is divided between Rome and Assisi. In Rome accommodation is at Sant’ Anselmo. The move to Sant' Anselmo for the first part of the programme was considered a great success by staff and students alike. It was good to be part of the wider Benedictine family, although the MFP group kept its own identity, liturgy and rhythm of life. It was an ideal central and peaceful location.

Each session of the Programme can take a maximum of 25 men and women. The language of the course is English and all participants are required to have a good working knowledge of it. So far over 360 people have participated. 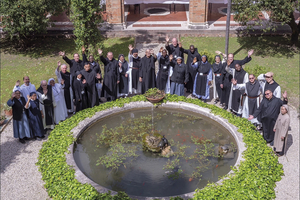 Aims of the Programme

MFP is an intensive programme that demands a serious investment of study over a period of 3 months. The aims are threefold:

ACADEMIC: to provide a deeper appreciation of the monastic tradition and its values.

PEDAGOGICAL: to reflect on how we communicate this tradition with love and enthusiasm.

PASTORAL: to deal with questions of discernment and human and spiritual development.

Character of the Programme

This Programme is rooted in the teaching of St Benedict and the monastic tradition. It is composed of:

LECTURES on a range of topics related to the monastic tradition and formation today.

GROUP REFLECTION and discussion to share experience, insight and expertise.

EXCURSIONS and visits to monasteries and historic Christian sites.

COMMUNITY LIVING with those from different countries and cultural backgrounds, with a regular framework of prayer.

The content varies slightly from year to year, but the following is an indication of the topics covered over the three months: The monastic dynamic of Christian discipleship; earthing Benedict; reading Benedict’s Rule in the land of Benedict; the art of winning souls; pastoral care of novices; the paschal dimension of monastic life (during Holy Week); the call to be human: issues in vocational discernment; the challange of living friendship and celibacy in community; sources of the monastic tradition: Basil the Great; John Cassian; the Rule of the Master; desert elders; Augustine of Hippo; monastic history from Benedict to the present day; lectio divina and the Psalms; helping novices to pray; the witness of community; conversion; monastic commitment; spiritual accompaniment in the monastic context.

The permanent staff of the programme are: Dom Brendan Thomas OSB, monk of Belmont Abbey, England, where he is currently Prior and Novice Master. He has been the Director of the Programme since its start in 2002.

Dom Javier Aparicio is a monk of St Ottilien Abbey and is Prior of the community of Rabanal del Camino in the north of Spain. He has been involved in formation work in the St Ottilien Congregation and is on its Council. He is a former participant of MFP and is joining the staff from 2019.

Dom Mark Butlin OSB, the Associate Director is a monk of Ampleforth Abbey, England, and has wide international experience working for AIM with responsibilities for Asia and English-speaking Africa. Previously he ran the Recyclage (Renewal) Programme at Sant’ Anselmo. He was at the forefront of the conception of the Programme.

The 2019 Programme had 23 participants from 20 different countries: 10 women and 13 men; Cistercians and Benedictines of various Congregations. We hope and pray that their three months of study and reflection will enrich their communities in the coming years. We were particularly pleased to welcome some new teachers, including Dom Mauritius Wilde, Prior of Sant’ Anselmo and Dom John Mark Falkenhain, monk of St Meinrad and professor of psychology there.

Sadly we have had to cancel our 2021 Programme because of the pandemic. Application forms for the Programme for 2022 can be downloaded from the website or sent to you as an email attachment. Please contact Fr Brendan if you would like further information. Please contact us after Easter 2021. The closing date for applications will be September 30th 2021. Later applications will be considered according to the availability of places.

The all-inclusive fee for the Programme is expected to be €6,900 (Euros) which represents the actual cost per person of putting on the Programme. Thanks to the generosity of supporters of the Programme a limited number of bursaries and scholarships will be available for those communities in need of assistance.