We have 108 guests and no members online

Music, a special way of seeking
and finding God 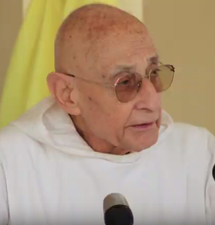 ‘The search for God,’ said Pope Benedict XVI to the world of culture in Paris (12th September, 2008), ‘led the monks of the Middle Ages to a culture of the word.’ Let us re-read his most important statement:

The search for God needs intrinsically a culture of the word. In order to pray on the basis of the Word of God, mere mouthing is not sufficient, music is needed. Two songs of the Christian liturgy derive from biblical texts, placed on the lips of angels, the Gloria which was sung for the first time at the birth of Jesus and the Sanctus which, according to Isaiah 6 is the acclamation by the angels who stand in immediate proximity to God. For St Benedict the definitive rule of prayer and of monastic chant is the word of the psalm, Coram angelis psallam Tibi, Domine, that is, ‘in the presence of the angels I will sing to you, O Lord’ (Ps 138.1). Here is expressed the awareness that community prayer, in the presence of the whole heavenly choir, is in tune with the supreme rhythm. Prayer and singing join the sublime spirits who were considered the authors of the harmony of the cosmos, the music of the spheres. By their prayers and chants monks must echo the grandeur of the Word committed to them according to the principles of true beauty.

1. Religious music must be the fruit of the music sent by the Creator into the world.

In speaking of medieval music, fruit of loving listening to the Word of God, Benedict XVI invites us to think of religious music and above all of liturgical music, the official prayer of the Church, ‘not as the work of personal creativity or of the individual, taking as its essential criterion the representation of an individual and a personal monument’. Rather, it is a matter, says Pope Benedict XVI, of ‘listening attentively with the ears of the heart to the constitutive musical harmony of creation, the essential forms of music put by the Creator in the world and in the human being, and of finding a music worthy of God, and at the same time authentically worthy of humanity which also proclaims that dignity aloud.’

These words of Benedict XVI could not even be guessed at in 1963 by the monks of Keur Moussa. Imagine their astonishment and amazement when they found certain modes of Gregorian chant in the popular music of Senegal at that time. For these very ancient popular chants are a language just like the modes of ancient chant before the Renaissance which allowed the composers of Gregorian chant to express their faith in music. At a more simple level the bush chants of Sahel and other regions of Africa are the expression of a social life where divine and human blend together. They rhythm the seasons, work and festivals which are part of existence from birth to death, and rejoin the ancestors who are always present in the heart of nature. So it is not surprising that certain links can be found between popular melodies of black Africa, still untouched by the contemporary music of the cities, and Gregorian chant, to the extent that they have served the monks of Keur Moussa as a quarry to use one or other African chant as basis of a liturgical melody.

However, it still remains that the Word of God, even when it is incarnated in a profane chant, acts on its own, just as a perfume takes possession of a vessel hitherto used to keep pure water for profane purposes. This should not be forgotten when a sacred Word is set to music which was not destined for this. Hence the reflections on sacred music which follow. 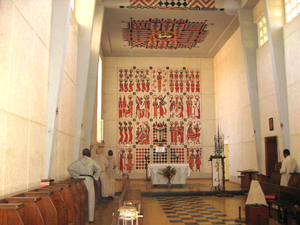 What separates profane music from the music of the sacred liturgy is that the latter is set to the Word of God. In the liturgy, the song of the Church, the music sings Jesus Christ present in the psalms and canticles of the Old and New Testament. This is why, on the basis of popular music, expressions of human life, the breath of the Holy Spirit must purify and elevate song by incarnating in it Jesus Christ and his Mysteries. This is a work in which God and composers, as well as singers and instrumentalists, collaborate intimately by prayer and meditation.

St Benedict designates liturgical prayer (the Offices) by the expression Opus Dei, the Work of God. God is, of course, the first Worker of prayer. This is because as creatures we are capable of reaching such depths only if we are inspired by grace, and because as sinners we are encumbered with our personalities which block the raising of our heart to God and our neighbour. But if grace carries us to the attention of God, his saints and his angels and to the mysteries of the Lord which we celebrate in choir, we will enter into the very work of God. This is put into action by the way of composing sacred music, singing it or accompanying it on instruments of the country.

1. Understand the text being sung or read

To understand the direction of a journey means to know where it is going and to walk in full confidence. One sings not words but phrases which group or separate words which have sense. One of the obstacles of the daily choral chant in monasteries is one of routine and inattention to the global sense of phrases. This produces the very common tendency to stress the final syllable of each word as if it were isolated from the rest. It is important to remain attentive to the sense. 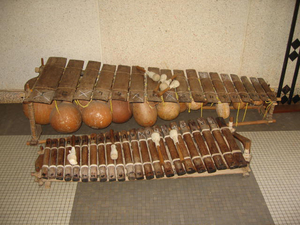 This sense is added to that of the text and amplifies it. Gregorian chant gives many examples of this. Sanctus XII (Mode RE) and Sanctus III (mode MI) give quite different expressions of the mystery of the Trinity. But such richness of expression translates itself into fact only if the choir has understood the spirit which animates the music of a text and executes it appropriately. Is it possible to find ways which give easy access to this richness of expression?

3. The melodic line often reveals the spirit of the music

Music is not merely a succession of notes going up and down. A musical phrase can climb to a high point and then descend to its point of departure. It can also burst forth after leaving the high point, as one finds often in Mandigo popular tunes, and descend by a series of steps. It can also progress in intensity by the repetition of a note, like a jumper who uses elastic to get over an obstacle. Any form is possible and good if the melodic line ‘speaks’, if one feels that the composer has something to say by the melodic line. Once the ‘sense’ is understood, the voices must express the advance or the meditation or the descent by an intensity of continual movement controlled by this awareness.

4. Benedict XVI has recalled that for St Benedict monks pray and sing in the presence of the heavenly court

By so doing they are submitting to and united with the music of the sublime spirits. ‘By their prayers and chants monks must correspond to the grandeur of the Word confided to them, to reach its imperative of real beauty.’ The Gregorian school of Solesmes has been reproached for producing an ethereal chant, lacking in virility and humanity. In fact one of the principles of this school, which at a certain time and still today has enabled many men and women of diverse cultures to find God and to pray, is to follow the text and the melodic line and express its sense, increasing progressively in intensity towards the high point and becoming more gentle as the voices reach the conclusion. Violence which is often used in profane song to express intensity of feeling, is in contradiction to the humility of prayer. The most evocative image of this forcefuless is that of incense as opposed to stone-throwing. Incense, thrown forcefully, mounts towards God in lighter and lighter supple waves which disappear in the vaults of the cathedral. This principle holds pretty well for all religious chant including chants in African languages with authentically African rhythms. When art is put to the service of the Word of God there is a conversion. The percussion of tom-tom, balafon, kora and calabash which accompany the Word are in the service of Christ, gentle and humble of heart, present in the Word. Force controlled by the spirit can brilliantly express sadness or enthusiasm. But Christian chant is neither aggressive when addressed to God nor attentive to applause. A good percussionist is at the service of the Word, and brings the choir into the rhythm of the chant without crushing or dominating it as is often the case with secular music in which percussion is often the heart of the festivity. For sacred music the Word of God is the soul of choral chant.

The modern music so aggressively poured out all over the world by the media for the last few decades influences more or less consciously Christian composers and parish choirs. By contrast to the modal music of the Middle Ages or ancient Africa, modern music does not have its source in the ancient familial society where the divine and the human blend together. Adopted by Christian singers who are inspired by it for their proclamation of the Word of God, supported by synthezisers, electric guitars and sound systems, this music is now very widespread in choirs of young and not-so-young people. The generosity, courage in the faith and apostolic drive of such musicians cannot be doubted. However, by contrast to what we have said about ancient profane music which should be put to the service of God in order to be purified and ennobled by the incarnation of Jesus Christ, one has the impression that it is the Word of God that is putting itself at the service of profane music. Why should the Word of God incarnate in Jesus Christ not purify this music, but rather the reverse? This is perhaps a conversion still to be found and a path for real musical creativity.