We have 212 guests and no members online

Pioneer of the construction of modern churches in Korea

In South Korea, when one enters a Catholic church one is liable to be pleasantly impressed by the simple, elegant and modern architecture. This is true of religious buildings and of parish centres. Dom Alwin Schmid, a Benedictine of Münsterschwarzach in Bavaria, spent most of his life in Korea. He was a pioneer of the construction of religious buildings.

Born in 1904 in south Germany, in the heart of a numerous family which included many teachers, he was drawn from his youth to artistic disciplines. He studied plastic art successively at Munich, Berlin and Vienna in milieux which were in dialogue with modernity in the tumultuous years which marked the beginning of the First World War. In 1931 he entered the monastery of Münsterschwarzach. His years of monastic training were not peaceful because of his sympathy with the writings of Nietzsche and his aversion to or at least scepticism towards what he considered the enslavement of traditional clericalism. Nevertheless he embarked on the study of theology at Würzburg in the years 1933-1937. He was ordained priest in 1936. In May 1937 he was sent as a missionary monk to the north of China, the region of Yanji where Benedictine missionaries held the pastoral responsibility. If the apostolic vicariate of Yanji was in continental China, nevertheless the Christians of this region were for the most part Korean émigrés. Since Manchuria, north of China, was at this time under Japanese occupation, the missionaries at Yanji needed to learn three Asian languages at once, Chinese, Korean and Japanese.

At his arrival in China Dom Alwin was plunged into an impassioned missionary activity. At that time apostolic zeal was so fervent that, at the moment of the brutal interruption of 1945 no less that 25 parishes were founded. Soon after his arrival he was given charge of a parish, but because of his linguistic limitations his priestly ministry was frankly unsatisfying. In parallel with his pastoral activities Dom Alwin set himself to conceive and design several parish churches, managing to combine in an original way elements of the ‘art nouveau’ or Jugendstil with classical architecture both European and Asian. In May 1946 the soldiers of the new Communist government arrested all the monks, who were condemned and sent to hard labour camps on the charge of presumed collaboration with the former Japanese occupants. Dom Alwin was set free in 1949 and returned to Germany.

Back in Münsterschwarzach Dom Alwin was employed for 12 years as teacher of plastic art at the college of his monastery, precisely at the moment of the great liturgical movement which inspired him. He could not give free rein to his artistic talents because his work was seen as too avant guard, at a moment when restoration rather than novelty was in vogue. On the architectural level, in an East Germany ravaged by the war, where everything was being reconstructed, he was strongly influenced by two great architectural figures, Rudolf Schwarz (1897-1961) at Cologne and Hans Schädel (1910-1996) at Würzburg, two architects who introduced modernity in the construction of churches in the Rhineland and in south Germany.

Meanwhile the missionary Benedictines, expelled from China in the north and from North Korea, had founded a new monastery in South Korea at Waegwan, near the great port-city of Daegu. Dom Alwin received in 1958 the commission to design and build a new parish church. 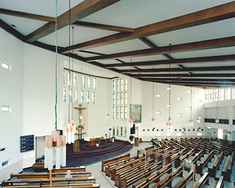 This turned out to be the beginning of his career, for this order was followed by many others. He was set up in the monastery of Waegwan in December 1961 and opened an architectural office. He was commissioned not only for the construction of churches but also for the decoration of them, the elaboration of frescoes, altars, statues, etc. During the 1960s, when the Korean Church was taking off, Dom Alwin had to keep several projects going at once. For architectural forms he adopted the structure of modern churches since Vatican II which is found notably in the work of Rudolf Schwarz, but he adapted it to south Korea. As the budget was often restricted he sought cheaper solutions, He willingly adapted the model of churches to their countryside environment. Even in the year of his death in 1978 he was responsible for building seven churches at the same time.

At the time of his ministry in Korea Dom Alwin conceived 85 religious buildings, churches, parish centres, monasteries and chapels. The luminous room, simple and functional, which he built show clearly his theology of communion. All the seats are directed to the altar. How is this achieved? By the interior arrangement in a fantail or oval. The distance between altar and community space is also kept to a minimum: there is no structural separation between the altar and the celebrating assembly. Baptism fonts are brought to the centre, whereas the tabernacle is discretely withdrawn. The general atmosphere is convivial and familiar, bathed in a harmony of light. To achieve this Dom Alwin skilfully combined symmetrical and asymmetrical elements. Visitors feel warmly welcomed. The church furniture is frankly sober. Geometrical forms remain abstract in order to preserve the impression of a ‘holy sobriety’. The buildings are constructed with an open and relaxed linkage, creating a certain modest discretion and in every case excluding majestic weight or crushing triumphalism. In the internal structure the lines betray someone who practises the liturgy, a monk who perfectly masters the liturgical action and knows how to guide the eye and establish a link between sacristy and the space surrounding the altar. The pastoral care is obvious in the harmonious integration of spaces designed for parish activities skilfully linked to the church itself. In addition the church can be partly adapted in design in order to serve for activities less directly cultic. According to Dom Alwin’s theological conceptions a church is constructed to serve not exclusively for sacramental purposes but also as a centre for various parish activities. 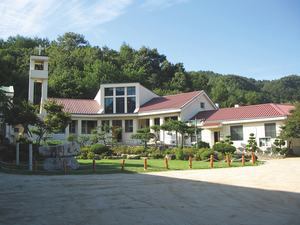 At the present time a significant number of churches built by Dom Alwin have been demolished – it is financially more economical to construct afresh than to adapt older buildings to modern norms. But we should note the essential role played by these buildings in Korea: they made possible a move from a form of a church perceived as an administration to the building of a living community of believers. Basically, the religious architecture of Dom Alwin has allowed the liturgy carried by the breath of Vatican II to enter Korea resolutely. Is this the fruit of Dom Alwin’s work or of major theological principles? In any case it is undeniable that in the contemporary Church of Korea it has had a quite exceptional influence.