We have 222 guests and no members online

GIVE ME A HAND!

The Word of God leads us from the desert to the sea, from the miracle of feeding to the calming of the ship of our heart, tossed around by a thousand waves. We have in mind that ‘all ate and were satisfied’ (Matthew 14.20), and we know also that the disciples, who would have preferred to send away the crowd on the excuse that ‘this place is a desert, and it is getting late’ (14.15), are capable not only of feeding the crowd but also of giving them such plenty that there were twelve baskets full of left-overs to carry away. But we do not know – the text says nothing about it – whether the disciples ate or whether they ate by themselves or on the boat. Nor is it made clear whether the Lord ate; it is said only that Jesus sent the disciples away ‘immediately’. Once they and the crowd had left, he climbed the mountain to be alone and pray. Matthew insists, ‘When evening had come, there he was, alone’ (14.23). We would love to enter into this mystery of the solitude of Jesus which corresponds so well to that which Elijah – not without difficulty, for he had to forgo his own expectations and his secret hopes about God and about himself – experienced, ‘the sound of a gentle breeze’ (1 Kings 19.12).

Going beyond any translation of this untranslatable verse of Scripture, we can allow ourselves to be enveloped by the intimate experience it evokes, that of a heart capable of perceiving reality. Just like wind on the beach which soothes at the same time as our skin feels the strength of the sun and the freshness of the sea. Just like the subtle touch which ruffles our skin when a loved one passes near us, and we feel that presence without opening our eyes. Just like the light breath which carries the echo of distant music and conveys to us a sweet nostalgia. Such is repose in the Lord Jesus, such is the nourishment he gives, such is the secret food which nourished him for forty days and forty nights in the desert. Such is the interior whisper which nourishes the Lord and comforts him. 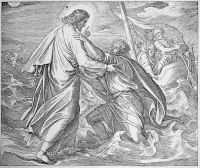 While on the mountain all is so calm, a couple of paces away the boat is being battered by the waves, for ‘the wind was against them’. Twelve baskets full of bread – a whole basket each, to take away any excuse for quarrelling – guaranteed neither life nor peace for the disciples. Everything which could foster their peace, which can give peace to each one of us, is nothing but the presence of the Lord Jesus, who, after being restored by prayer, ‘towards the end of the night, came to them walking on the sea’ (Matthew 14.25)’. Despite having helped to feed the crowd, the disciples were struck and cried out. Strange though it was – and is it not the same for us? – they did not recognise the Lord when he spoke to them ‘in a gentle breeze’ (1 Kings 19.22) rather than a violent storm or an earthquake. As it happens to us too, Peter, instead of being amazed, yields to the need to ask yet more, even to testing out the Master, playing the part of the Tempter himself, ‘If it really is you yourself, command me to come to you over the water’ (Matthew 14.28). By contrast to his reaction to Satan, the Master yields to Peter’s request. Nevertheless, each time we say ‘Yes’ to him, we merely express our fear of living out our acquiescence. Suddenly, weighed down by the burden of our fears, we begin to sink. Just like Peter, we know the fear of really doing what we asked to do – ridiculous and pathetic at the same time. We are not accustomed to finding ourselves so conformed to the ‘light’ God who calls us to come over the water to him. The liberty offered to us, instead of giving us wings, frightens us into crying out, ‘Lord, save me!’ The fact that the Lord takes us seriously is frightening.

The crowd had been satisfied without saying a word, had allowed itself to be transformed by the hand of the Lord like a child on its mother’s breast, and had gone off satisfied and contented. The Lord allowed himself to be recharged interiorly by the Father by confidently going onto the mountain to pray alone. We ourselves as disciples allow ourselves to be upset and troubled by the contrary wind, to the extent of no longer being aware of the Lord’s hand which holds us so firmly despite the wind. Let us allow ourselves to be held by this gentle hand! Let us be impregnated with the gentle strength of the hand which saves, and give ourselves entirely with infinite gentleness to the only Saviour of our life. May we never be thrown over the cliff into the sea, under the influence of that fear which weighs us down like a millstone. Let us rather allow ourselves to be led by his word, ‘Have confidence, it is I’ (14.27). If we have heard even once in our entire life that voice, then there will burn in our hearts ‘a great sadness, an endless pain’ (Romans 9.2) like a fire which devours us, the pain of knowing that others can be afraid. In such a case one can but say with Peter, ‘Give me a hand!’ And not just any hand, but the hand which proves itself by its firmness.