We have 148 guests and no members online

With this number of the AIM Bulletin we are introducing a new formula. The reports will be more varied and the articles shorter. In this way we hope that the Bulletin will address a wider public, informing them about the life of the monasteries and their centres of interest. Each issue will begin with a message from the Abbot Primate, from the Abbots General of the two Cistercian Orders and from the President of the International Community of Benedictine Women.

Each issue will focus on a particular theme. The current issue is concerned with female monasticism. The occasion for this is Pope Francis’ Apostolic Constitution Vultum Dei Quaerere. Several sisters have written items more or less linked to this theme. Sr Scholastika Häring, of the Abbey of Dinklage, in Germany has studied this text carefully and here gives us an exegesis of it. There is also an expansion of the same theme in the form of a text from the United Nations for Women presenting the legal situation of women in the world. There will also be items on lectio divina, on work and the economy, liturgy, art, history and many other matters. In each issue the salient statistics on contemporary monasticism in every latitude will be presented, and there will also be an item on monastic history. We will present a number of projects to which AIM wishes to lend its spiritual and material support, hoping that readers will want to contribute towards financing these ventures. 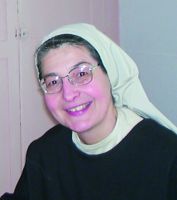 Above all, however, we would like to welcome Sr Christine Conrath to the team at the secretariat after the departure of Sr Gisela Happ. Sr Christine has been a nun of the Abbey of Jouarre in Seine-et-Marne (close to Disneyland!) since 1980. She was born in Paris in 1953. Before entering the monastery she did classical studies at Meudon in France, studied in Germany (the Institute of Translation and Interpreting at Heidelberg) and Paris. After this she spent a year at Lomé (Togo) to discover Africa and religious life. She taught German for four years at Rennes (France) before entering religious life.

In the monastery she worked in the ceramic studio (making cribs and statues, religious art) both as a member of the working team and in charge of the business side. For the last few years she has worked in the bursary. She did further studies on the Rule of St Benedict and taught this in the noviciate at Jouarre. She translated the Commentary on the Rule by Michaela Puzicha, and has just finished the translation of the exegetical Commentary on the Rule of St Benedict by Sr Aquinata Böckmann, which is about be published in three volumes by the Editions du Cerf. In January 2016 Sr Christine had the joy of sharing this enthusiasm for the Rule at a session of formators for West Africa at Bouaké (Ivory Coast).

Sr Christine has been able to further her interest in young monasteries by working on the edition of the Bulletin of the AIM between 1993 and 2003 at the request of Sr Lazare de Seilhac (Saint-Thierry). Through this she got to know Fr Mark Butlin (Ampleforth), a long-time member of the team, Br Cyrill Schäffer (Sankt Ottilien) and Sr Veronica Dupond (Venières), who has since died. Now she has teamed up with Sr M-Placid Dolores on the Secretariat of AIM. She will spend two or three days a week at Vanves and will take part in the sessions and meetings in different regions of the monastic world.