We have 137 guests and no members online

Total Obedience to the Orders of the Abbot

‘Total Obedience to the Orders of the Abbot’

The Mother Abbess of Stanbrook offered to the CIB a reflection on the delicate question of listening to a superior who fails to put into practice the teaching which he or she gives. The question is not new, but remains an important aspect of listening with the heart.

‘Obey the orders of the abbot unreservedly, even if his own conduct – which God forbid – be at odds with what he says. Remember the teaching of the Lord, “Do what they say, not what they do.”’ (RB 4.59-61). The command of the Superior who does not do what she says can definitely create a conflict among the community members. How then can a superior instil in the sisters the ‘listening with the ear of the heart’ attitude when her conduct does not correspond with what she says?

Seven years ago my own community went through a discernment process before our abbatial election. It was led by the then Prioress General of the Bernadines of Esquermes. She helped us look at the role of the abbess and what we, as a community, expected from her. It was this that formed our discussions. There was one particular thought that stayed with me and I shared it with my community at the time. The superior was someone who through her encouragement will help to set her sisters free. How? By seeking truth, and truth is God. It is this that sets us free. This is one journey made together, the abbess/prioress and community together, not separately. The major difficulty can be that our sinfulness and woundedness can prevent this freedom. We can become bound to sin and old hurts and it is this that hardens our hearts; this prevents a listening heart both as individuals and as community.

There is one Scriptural image that reflects for me this loosening of the bonds. It is found in the Gospel of John: Jesus raising Lazarus from the dead. Jesus had delayed his return to Bethany, by which time his friend, Lazarus, had been dead four days. Jesus does raise Lazarus but what I actually want us to do here is focus on that moment after Jesus has called Lazarus forth from the tomb: ‘The dead man came out, his hands and feet bound with strips of cloth, and his face wrapped in a cloth. Jesus said to them, “Unbind him, and let him go.”’ (John 11.44)

Some of you may know or may have been lucky enough to have seen the Sir Jacob Epstein sculpture of the raising of Lazarus in New College, Oxford. It depicts Lazarus coming out of the tomb in response to Jesus’ cry to him. He is trying to free himself from the bonds that bind him. His shoulders and arms are pulled right back and one can almost feel the restriction of his movement caused by the cloth that binds him.
Jesus cries out, ‘Unbind him, and let him go.’ There is another word I would like add to the Lord’s cry, namely ‘free’: ‘Unbind him, and let him go free’. Lazarus has come forth from the tomb on hear-ing the voice of the Lord, and then Christ loosens his bonds.

St Benedict tells us in the Rule: ‘For it is the place of Christ that the superior is understood to hold in the monastery by having a name, which belongs to Christ’ (RB 2.2). I link this to the Lazarus event. I feel one of the most important roles of the Abbess or Prioress is to help her community to walk in freedom. She helps to loosen the bonds that bind her sisters and prevent them hearing the voice of Christ saying, ‘Unbind her and let her go free.’ How does she do this?

Let us go back to chapter two of the Rule: St Benedict tells us that the superior ought ‘to govern her disciples with a twofold teaching. That is to say, she should show them all that is good and holy by her deeds even more than by her words, expounding the Lord’s commandments in words to the intelligent among her disciples, but demonstrating the divine precepts by her actions for those of harder hearts and ruder minds.’ My point is that what the superior says is important but equally important are her deeds and actions; they are another form of voice. It goes back to the example of the desert fathers and mothers. Some of them couldn’t read but the example of the Abba or Amma was as important as what they said. This is how the disciple grew in love and service of the Lord. It is how they learnt to listen with the ear of their heart; just like the disciples on the road to Emmaus in the Gospel of Luke. They had not recognized the risen Lord on the road and it was only after Jesus had left them they realised, ‘Were not our hearts burning within us while he talked with us on the road and opened the Scriptures to us?’ (Luke 24.32) Their hearts were burning, and as our words and actions become more unified we burn more brightly as witness and example to others. I am immediately reminded of the desert Father story:

Abba Lot went to see Abba Joseph and said to him: ‘Abba, as far as I can I say my little office, I fast a little, I pray and meditate, I live in peace and as far as I can, I purify my thought. What else can I do?’ Then the old man stood up and stretched his hands towards heaven. His fingers became like ten lamps of fire and he said to him, ‘If you will, you can become all flame’ (The Sayings of the Desert Fathers, tr. by Benedicta Ward (Mowbrays, p. 88, no. 7). 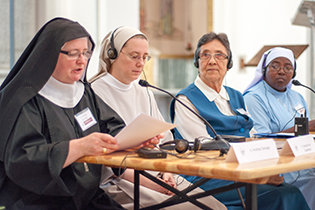 It would be very difficult for a superior to instil in her sisters the ‘listening with the ear of the heart’ attitude, when her conduct does not correspond with what she says. The sign of a good leader is one who leads by example. What they say and what they do must be in harmony. This builds up faith and trust on both sides. In a Benedictine community it is this faith and trust that opens the hearts of all the sisters, including the superior’s, to the workings of the Holy Spirit. If without good reason the abbess or prioress is acting contrary to what she says, it will lead to conflict and the hardening of the heart, as faith and trust is destroyed. This is what creates conflict. The flame of Christ that burns in each member of the community will be snuffed out.
Then how can she instil that listening heart once again in her community? The answer is a simple one, live the life she proclaims. The danger for most superiors today is that we become so wrapped up in the business of each day that we lose sight of Christ. We become lost in the things of this world. Pope Francis in a homily last year to the General Chapter of the Order of St Augustine says something for us all.

Look into the depths of your heart, look into your own inner depths and ask yourself: do you have a heart that desires something great, or a heart that has been lulled to sleep by things? Has your heart preserved the restlessness of seeking or have you let it be suffocated by things that end by hardening it? God awaits you, he seeks you; how do you respond to him? Are you aware of the situation of your soul? Or have you nodded off? Do you believe God is waiting for you or does this truth consist only in words? (Pope Francis, 28 August 2013)

We may be busy superiors, but in the process we may also have nodded off. ‘Now is the hour for us to rise from sleep. Let us open our eyes to the deifying light, let us hear with attentive ears the warning which the divine voice cries daily to us, “Today if you hear His voice, harden not your hearts”’(RB Prologue 8-10). The superior holds the place of Christ in the monastery. If we wish to instil in our sisters the ‘listening with the ear of the heart’ attitude we must live in imitation of the Master.