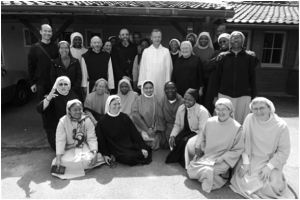 A jingle for these months runs, ‘Formation begins with transformation’! Benedictines and Cistercians, monks and nun, 24 of them, drawn from 13 different countries, representing four continents! To unite such diversity for a relatively long time in daily sharing, if not a miracle was at any rate a formidably demanding challenge. Yet every member shared with all the others the same desire to deepen their spirituality and the same awareness that their lives were rooted in the Word of God and the Rule of St Benedict.

We had chosen to preserve a monastic framework and were welcomed successively by the communities of Scourmont (a month), Saint-Thierry, la Pierre-qui-Vire, Fleury, Martingné (two weeks in each). We tasted the joys of being pilgrims! ‘The places matched our group itself for their diversity, and it is always enriching to meet a community on its own ground as it really is.’

One elder accompanied the group for the whole three months, Mother Loyse, prioress emerita of the Benedictine monastery of Ermeton in Belgium, a discrete presence but, said the participants, fundamental to the unity of the group. The group was completed by the invaluable participation of Pastor Pierre-Yves Brandt, Professor of Religious Psychology at the University of Lausanne, highly knowledgeable and an excellent friend of the monastic life. On three occasions the participants benefited from his attentive and experienced presence for some days. After this very positive account, we envisage a new edition of Ananias!

We hope to enlarge the perspective and speak of the formation of brothers and sisters in situations of responsibility with regard to other brothers and sisters (assistants to the superior, noviciate, guesthouse, bursar, etc). For Ananias 2013 there were five monks and eighteen nuns. We would like a better balance and we issue the invitation to make the plan of formation better known, especially in houses of men. The details are still being elaborated, but the dates are already fixed: 3rd September to 26th November, 2015.