We have 172 guests and no members online

An Appreciation
Dom Jean-Pierre Longeat, President of the AIM

For more than 15 years Dom Martin Neyt faithfully served the Alliance for International Monasticism. We would like to give an appreciation of his actions, and in doing so to recapitulate the ground he has covered.

Dom Martin was born in Africa in 1939, of Belgian nationality. He became a Benedictine monk of the Abbey of Saint-André at Bruges in 1963. He was part of the group of Walloon monks who left Bruges in 1970 to found Saint-André of Clerlande, which belongs to the Congregation of the Annunciation. At Clerlande Dom Martin was first Novice Master and then Prior of the monastery for twelve years. During this time he prepared the community for the foundation of Mambré near Kinshasa (DRC). This foundation took place in 1978. As Professor of the Catholic University of Louvain and at the University of Kinshasa he taught African art, and also devoted himself to the study of the Fathers of the Desert, publishing the edition of the correspondence of Barsanuphe and John of Gaza for Sources Chrétiennes.[1] 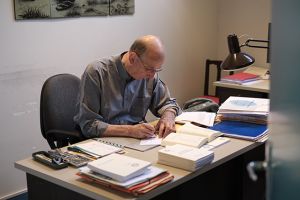 At the end of the Council of the AIM held at Vanves on the 25th and 26th of November, 1996, the newly-elected Abbot Primate, Marcel Rooney, considered the question of the future of the AIM, its aims and its future staff. He arranged a meeting at Rome for February 1997 with Abbot Notker Wolf of the Congregation of Sankt Ottilien, Abbot Armand Veilleux, OCSO, Procurator of the Cistercians, Sr Aquinata Boekmann, OSB, of the Tutzing Congregation and Dom Martin. The aims of the AIM were redefined: an enlarged Council of the AIM was to meet once a year. The executive Committee, composed of one representative of the Sisters, one Benedictine and one Cistercian member, would join the President and Secretary of the AIM to make the financial and other measures necessary for the time between six-monthly meetings of the Council. The headquarters of the AIM would continue to be at Vanves.

Dom Martin Neyt was appointed President after a vote of the synod of Abbots President of the Benedictine Congregations, with the agreement of the two Abbots General of the Cistercians. The Secretary General would be Dom Jacques Côté, monk of Saint-Benoit-du-Lac (Quebec), till then secretary of the Abbot Primate; he would live at Sant’Anselmo in Rome and visit Vanves regularly. The terms of office were fixed at five years, renewable. 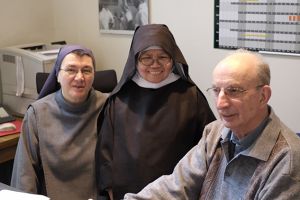 The arrival of Sr Gisela Happ, OSB, administrator of the Abbey of Saint Hildegard of Bingen in Germany, profoundly transformed the Secretariat at Vanves. She became an ever more effective tool in the service of the foundations which continued to proliferate and develop. The International Secretariat was formed. Little by little the AIM acquired a recognisable profile and succeeded in gathering significant funds for the development of communities.

Dom Martin encouraged the development of the Association of Friends of the Monasteries. The celebration of the fortieth anniversary of the Association gave rise to an important meeting at the College of the Bernardines in Paris, and to a publication. Under the guidance of Dom Martin the AIM accompanied communities founded on all the continents, taking part in its own way at the emergence of regional, national and international meetings. At times it prepared these meetings, arousing reflections on shared values, providing experts or speakers; at times its participation was simply financial, making such meetings possible or working in centres for formation or study to enable sisters or monks of different continents to live together for a certain period. Twice the AIM organised a journey for monks and sisters to Egypt to get to know the Coptic monasteries and draw from them new impetus for their own communities. The AIM has taken care to keep in touch with world events and to shoulder the worries of communities affected by natural catastrophes, fratricidal wars, sudden economic or financial reversals. It has been able to contribute to making communities aware of the trials and joys experienced by other monasteries in other places.

Dom Martin had the joy of organising the 50th anniversary of the AIM. It was his will that it should take place at the Abbey of Ligugé, where the organism had been born on the occasion of the meeting of Benedictine and Cistercian abbots for the 16th centenary of the foundation of the monastery by St Martin. It was a happy time of meeting, sharing and reflection. Throughout the time when he was presiding over the AIM Dom Martin had a particular care for the Bulletin. He gave it a new look, and constantly enriched its content. These efforts well reflect his preoccupations during the fifteen years at the head of the organisation. Starting in the year 2000 fundamental articles on different monastic themes have been presented in the Bulletin, written by different authors drawn from communities with which the AIM is in close contact, on Lectio, government and formation. Valuable have been also details on the history of monasteries and on different items of news related to monastic and Church life and the world. During these years the Bulletin has earned its reputation, and continues to enjoy it.

A statement of Dom Martin Neyt on questions of the present day and the future: 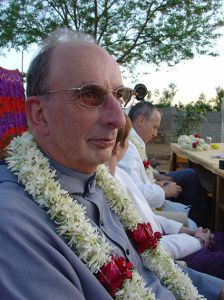 ‘The Lord often reveals the best course of action to a younger brother’ (RB 3) This saying came into Dom Martin’s mind when he viewed for the first time the film ‘Si Loin si proche’, made for the celebration of the AIM jubilee. Four monasteries featured in it: that of Séguéya in Conakry Guinea, that of the Benedictine sisters of Salvador of Bahia placed in the favelas of the town, the Cistercian Ashram of Kurisumala on a mountain of Kerala in India, and that of the Vietnamese Benedictine sisters of Thu-Duc, deep in Saigon. These four communities, remarkably placed in the milieu which surrounds them, are examples of successful inculturation by which the community enriches the life of the Church and of society. There is no need of long commentaries to discover that each of the 450 new foundations since 1960 are privileged places for the demanding grace which is the gospel. They are living parables which anticipate the reality of the Kingdom to come. ‘Come and see’, said Jesus when he called the first disciples. These new monastic territories are close to the first Christian communities where everything was held in common; their heart was united in listening to the Word of God and of the Church, in prayer and in the celebration of the Eucharist. St Benedict’s charism was truly to bring together the life of the sisters and brothers, in a single prayer and work, in a search for simplicity, enthusiasm and interior transformation.

An Egyptian Father living at Gaza used to say ‘Attach your boat to the ships of your Fathers’. The challenges of our time bring each monk or nun and each community face to face with heavy trials, specifically human and often exaggerated by the media of our times: sexual deviance, paedophilia, violence to the point of genocide, a cruel gulf between the poor and the rich, human trafficking of young people to other continents, the temptation to make use of monasteries for self-fulfilment in study or other activities; a desire for the status of religious life completes the list of capital sins. A certain way of life is intended to separate from the frenetic activity of the world, to provide a just and respectful welcome, to reach beyond the limitations of social or cultural identity. The trials of communities in our day are just as formidable as those of former years, merely different. ‘It is by the love that they have for one another that you will recognize my disciples’. Building together the Body of Christ, making mutual love a school of the Lord’s service, are signs which do not deceive. But the road is long and the AIM, just like the Good Samaritan, accompanies, discerns, takes risks and continually reminds us of the heart of monastic tradition. Communities need to earn their daily bread, to take the advice and accept the accompaniment of suitable persons, to come together for the sale of monastic produce. Challenges must be met, new tasks accomplished: the long road of self-discovery, right relationships to others, construction of the human ladder (not grandiose and expensive projects), welcome to the poor and helpless no less than support for the population in the vicinity of the monastery.

Thus, humbly, the AIM was created and is developing in an evolving world where no community chooses its own context, but tries to form its identity as best it can. The AIM exists to contribute to the construction of a new world. In multiplying its contacts with the environment it makes its own the first words of the Benedictine rule, ‘Listen, my son, to the teaching...’. Listening remains primordial, it implies the discovery of another, it avoids the ambiguities and misunderstandings of communication and sets up true dialogue. Its ambition is, while respecting autonomy, to create an Alliance.