We have 138 guests and no members online

FRAGILITY AND PARALYZING STRUCTURES
IN THE MONASTIC COMMUNITY

Throughout the history of monastic life there have been periods of flourishing and periods of decay, periods when society and the state have supported and encouraged monastic life and periods of persecution resulting in the closure of monasteries and the death or exile of monks and nuns. Normally all this reflected the life of the Church herself, though monastic life in its origins was not a passive reflection of the state of the Church but rather a powerful force for reform and expansion and, above all, for spiritual growth. While it is true that ‘there is nothing new under the sun’, it is also true that the world today is evolving at such a rapid rate that fundamental monastic values that were once shared to some extent by society, especially in the traditional Christian countries of Europe, have just been unhinged. Some examples are stability, austerity, hard work, silence and a regular life of prayer and liturgical celebrations. Never before has the life of the world, from which our candidates come and in which most of our brothers and sisters serve, so militated against any form of monastic observance. Only those who can swim strongly against the tide can possibly hope to survive in their present form. 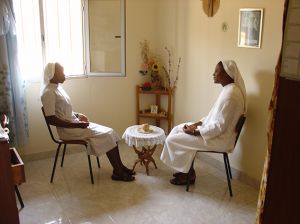 That being said, human beings have always been fragile, the result of original sin, so fragility has always been part and parcel of the monastic framework. Thus St Benedict legislates for the weak as well as the strong and recognises that many of his monks will  less strong and encourages a koinonia of respect and mutual help within the community. However, he is also aware of and takes into consideration fragilities that are not just individual but shared by the whole community, fragilities that are intrinsic to human society. Human beings like talking, gossiping, joking and generally wasting time. Monks enjoy going outside the enclosure, having meals out and being entertained. They enjoy interaction with guests and merchants. They are not particularly good at reading and praying alone. They have difficulty in doing a full day’s work. They don’t like getting up in the morning or going to bed at night. They are inclined to fall in love and have romantic and sexual liaisons. Other passions are also at play: envy, jealousy, hatred, anger, boredom, accidie and so on. So the life in a Benedictine monastery is organised in such a way as to make communal living possible, a life of prayer and work, a life centred on Christ that will lead men and women to full maturity as human as well as spiritual beings.

The structures put in place by St Benedict are not meant to paralyze the life of the community but rather to make it possible and to make it work in such a way that everyone can flourish and grow in friendship with God and in relationship to each other. St Benedict would regard his structures as liberating, not as paralyzing. A good example is the ‘Order of the Community’: everyone knew his place, which would avoid confusion and chaos, in the oratory, the refectory and so on. Services were organised on a weekly basis and most of the community took their turn in the kitchen and refectory, for example. Certain people were put in charge of certain areas of community life, the guest master and his assistants, the infirmarian and so on. The offices, study, lectio, rest, meals and work all had their set times, though without watches and clocks and electricity, especially artificial light, this was quite difficult to arrange and calculate. Then there was the service of authority, the abbot, the prior, the economus, the novice master and others. Everything was supposed to work like a Swiss watch. St Benedict experienced the chaos of life in Rome, the disorder of life at Vicovaro and did not want to repeat this at Monte Cassino.

Where does all this leave us today? As I say above, the world has evolved dramatically since the end

of the Second World War and that evolution is getting ever faster. Communication at every level has transformed our world into a village. People are travelling at an unprecedented rate and culture is becoming globalised as never before. There might be an increase of superstition and pseudo-religious practice, but faith, at least in the traditional Christian lands, is becoming less and less important. Nevertheless, there are great differences between the US and Britain, for example, or Latin America and Spain, however we assess the rapid advance of Protestant sectarianism and the decline of Catholicism in Latin America and the advance of Islam, in all its forms, throughout the world.

What, then, are the specific fragilities and paralyzing structures in Benedictine and Cistercian monasteries today? Obviously, they do not afflict every community and there will be regional and Congregational differences. Nothing I say is meant to be a criticism of any one person or group of people.

1. The collapse of organised religion and the rejection of the Catholic and other churches by people of all ages, especially the young.

2. The simple demographic fact that the birth rate has plunged in the developed word and is plunging fast in the developing world.

3. The difficulty of unplugging young and not-so-young people from the internet and all that is connected with it.

4. Related to that, the decline in reading, writing, serious academic study and application to work in general.

5. The ‘sexual revolution’ has resulted in most young people having an active sex life from their early teens, which is not easy to give up on entry to the monastic life. It is often accompanied by emotional immaturity and instability. Virginity and chastity are no longer accepted virtues for most people.

6. The break-up of the family means that many young people are searching for father and mother figures, which can lead to an unhealthy dependency on superiors, formators, older monks and nuns, and even members of staff.

7. Candidates tend not to be so young today as previously. Many have held down jobs and had responsibility in society, many have owned property and cars, some have lived with a partner. This results in a certain independent spirit and difficulty with formators and others who are less capable and experienced. Obedience can prove difficult.

8. With the reforms that took place in the 1960s and 1970s, communities and congregations abandoned much that had become pointless and unnecessary, while, at the same time, giving up much that contributed to the monastic identity and life-style.

9. Many communities appear to have got beyond the point of no return and so are too old or incapacitated to be able to integrate and form new members.

10. Some communities no longer have people capable of being formators, nor do they have suitable people to be formed as formators. Without sounding classist or racist, there are communities who do not recruit sufficiently educated candidates nor do they give them a basic formation in the humanities and in the Christian faith. One is often surprised by the theological ignorance of monks, nuns and sisters.

11. The lack of suitable people to take on the role of superior, formator, bursar and so on.

1. These are more difficult to define. They certainly are not the fundamental structures put in place by St Benedict and the Holy Rule. However, uses and traditions that were formed to adapt the Rule or constitutions to new circumstances can soon become sacrosanct and, like gods, cannot be touched or changed.

2. Tradition is not meant to be a fossilised slavery to the past but a living stream of flowing water that helps us adapt to changing circumstances; it should be life-giving not death-inflicting.

3. Unfortunately, beautiful, historic buildings can be a noose around the neck of a community for all sorts of reasons: the expense of upkeep in many countries, they condition and even dictate the way we live, they are not conducive to simplicity and austerity, they can be cold and impossible to heat, they separate rather than unite people, they do not encourage a coenobitic life-style.

4. As communities grow they take on commitments that can be pastoral, educational, agricultural and so on. Work can lead to many paralyzing structures and must lead to us asking some very hard questions: For what does this monastery exist, to help people in their search for God or to sustain its work commitments? Work unfortunately leads many monks and nuns to ‘empire building’, which in turn leads to factions, envy and divisions in a community, to ‘haves’ and ‘have-nots’, to a twoclass or tier system, where some members are appreciated and others not, some open to privileges and others not. Power and domination become important goals for some, while others suffer from a lack of confidence and self-respect. Monasteries end up existing for the work they do and are identified by that work. Needless, to say, work becomes far more important than prayer. Add work to an unbalanced or immature mind and heart, and you have serious trouble at hand.

5. Finances and economics in the modern world are complicated and often need professional assessment. Incompetent administration can lead to the disintegration of a monastery or Congregation. Add to that the possibility of a corrupt administration, especially in those countries where sons are expected to support their parents and siblings.

6. The occasional lack of a viable form of canonical visitation, especially in those congregations of women that come directly under the local bishop, can lead to the loss of monastic values, observance and identity.

7. Excessive domination by the superior (with or without an inner circle of cronies and supporters) leaves a community disenfranchised and at the mercy of the centre of power. It also leads to the abandonment of any regular keeping of the Rule and constitutions as well as the basic norms of Canon Law. I am sure there is a lot more to be said and written. I invite everyone to participate fully, openly and honestly in the discussion.