We have 66 guests and no members online

Declaration of the Executive Comittee

Declaration of the Executive Comittee

The year 2012 was the occasion of a careful reflection on the future of the AIM. The Executive Committee, the Council and the Congress of Abbots took time to deepen this question at the moment when the AIM was entering a new phase with the appointment of a new President. The following text sets out this perspective on the future.

Declaration of the Executive Committee 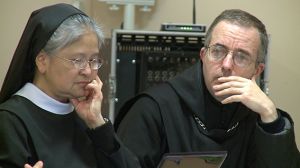 The Executive Committee considers that everything proposed at Ligugé can be put into practice without changing the ‘Aims and Objectives of the AIM’ voted at the meeting in 2002 at En Calcat and approved by the Congresso in 2004.

We wish to underline the fact that the AIM has never had the mission of substituting itself for other organisms of the monastic Orders which have responsibility for the monasteries of Africa, Asia and Asia/Oceania. It works in collaboration with all these organisms in so far as they wish it. It also works in collaboration with the many monastic associations which have been formed in all parts of the world in the course of the last 50 years, and which in many areas have taken over from the AIM, especially in the matter of formation (CIMBRA, ABECCA-EMLA, SURCO, ISBF, BEAO, BECOSA, BUT, BECAN). We consider that helping the work of these groups and, when necessary, encouraging their birth and development is far preferable to the formation of local or regional AIMs which has occurred in recent years.

It seems to us important also to distinguish the aims of the AIM, which remain unchanged, from the functional modality of the various structures set up in the course of the years for the realisation of these aims, namely the President and the Secretary General at Vanves, the international team, the Council and the Executive Committee.

1. With regard to the President, the Secretary General and any other members of the Secretariat at Vanves we see no need to make any change in their role. Nevertheless it is important to stress further to the Superiors of the Orders concerned the need to provide personnel for these functions. The Secretariat needs reinforcement.

2. The role of the international team is very important. This comprises its members who acquire in the course of their work with the communities a thorough knowledge of the monasteries and their needs. They can also appeal to qualified persons at work in certain regions and sub-regions without such persons necessarily participating in the meetings at Vanves.

3. Now that the examination of requests made to the AIM has been entrusted to the Executive Committee since 2004, the Council does not need to spend much time on this.

4. We believe that the Council, having heard the annual report of the work done by the Secretariat at Vanves and the international team, and having approved the expenditure for the past year, should consecrate the majority of its time to reflection on the situation and evolution of monastic life in those parts of the world where the AIM works. Equally we consider that it should respond to one of the aims put before the AIM in 2004, namely on the basis of a very rich and varied monastic experience to reflect on the monastic situations of the world as a whole, and if possible make a monastic contribution to the major questions confronting the Church and the world.

5. For this purpose, while observing the provisions of the lex propria, the number of members of the Council should not be too large. It is important to have persons who can contribute experience of the whole range of the monastic world rather than to have a numerical representation of each region. Nothing stands in the way of inviting qualified persons from one part of the monastic world or another when the discussion concerns a question touching their region or their particular competence.

6. One question which could be posed would be that of the opportunity of hearing about the work of the AIM in Eastern Europe.

We consider that, without modification of the statutes already revised in 2002 and approved in 2004, we can realize the aims which we submit to the consideration of the Council. In this way we can continue to serve monastic communities which are constantly coming into being and developing, especially in the young Churches. 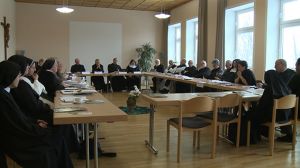 The most recent council of the AIM in September 2012 had a special importance, the more so because it was followed by the Congress of Benedictine Abbots at Rome, which included a workshop on the future of the AIM. I would like to repeat here some of the conclusions reached by those two moments of reflection.

From the workshop of the Benedictine Abbots at the Congresso emerged several points:

• The AIM should be concerned to continue to find funds in this changing economic context. But it should also be concerned to encourage the exchange of riches at various levels between monasteries. It is important to refresh the interest that the monasteries of Europe could contribute to this.

• The AIM should be in a position to re-assess the situation of monasteries with regard to this changing world and to propose broad re-readings which would allow progress beyond the immediate situation.

• Of course the primary aim of the AIM should be formation, from the basic formation right up to formation for leadership, including professional formation even from the viewpoint of material works, without neglecting permanent formation. Buildings and material help can contribute to improvement in this essential aspect of formation. They cannot be totally ignored. Similarly, some of our financial partners provide help especially for monasteries which are concerned with the development of the population around the monastery, and this must be borne in mind.

• Care should be taken not to double up subventions for projects which are largely supported by other organisations.

In all these matters the AIM is at the same time in the position of observer, of proposer and a link of solidarity between peoples with particular concern for the least well-endowed monasteries.

Now the outcome of the requirements put forward by the most recent Council, some of which have already been put into action:

• Strengthening the Secretariat of the AIM

An additional secretary was recruited in March 2013 to take charge of the site, the production of the Bulletin and the working out of various documents. This person is a hermit and works through the internet. She comes to Vanves several times a year to link up with the work of the rest of the Secretariat. In addition, since September 2013 the President has lodged on the spot at Vanves and helps in the work of the Secretariat. The Secretariat does not want a third person present either full-time or part-time. There will be a re-consideration at the end of a year of the new presidency.

• Collaboration between the international team and the Council

The minutes of each meeting of the international team have been made available since last year.

In any case the Executive Committee proposes to hold its meetings twice a year, joining the international team, though reserving the possibility of holding its own meetings if necessary.

The international team is officially represented at the Council by the President and the Secretary General but also by Dom Mark Butlin who is present at meetings of the Council and by the members of the Executive Committee if they in fact participate in meetings of this team.

In recent months the international team has considered two themes proposed to the Council of November 2013, ‘Paralyzing Structures and Fragilities of Communities’ and ‘The new world financial balance and its consequences for the life of monastic communities.’

The communities visited by the international team are many. They cannot be enumerated here. Minutes of the meetings of the team are available to members of the Council.

We have noted a certain number of comments made by the Council of September 2012: members of the Council will ensure that news of the Orders and Congregations are conveyed. This is why many interventions on this matter were expected during the meeting of the Council. Care will be taken about this for the minutes of the Council; circulation should be proposed.

Prior Peter Egwrugjakpor of Ewu-Ishan, Nigeria (Congregation of the Annunciation) and Prioress Metilda George of Tiruvannamalai, India (Congregation of Grace and Compassion) were proposed and accepted as new members of the Council. It would be good to make use of their presence in Europe to enable them to contact some monasteries in order to alert them to the monastic vitality in other parts of the world and the importance of supporting the AIM. As far as possible they will be able to make their visits to Europe coincide with the needs of their Congregations. The international character of the Council can also be expressed in the form of the meetings (Council, international team, Bulletin) during which very distant members could be present by Skype.

The aim of the AIM is to help monastic foundations/implantations principally in southern lands, but also in eastern Europe. This must remain the basic aim. As far as aid to eastern Europe is concerned, the Council of 2011 at Sankt Ottilien voted in favour of the principle, and there is no question of going back on the decision. Of course in responding to requests from monasteries, the AIM needs to discern whether the communities concerned really need the help or whether in the last analysis some of them might be in a position to help others financially.

• The other points of the Council have been carefully considered by the Committee and the international team. These are:

- To work on themes directly linked to the work of the AIM.
- To oversee monastic groups by continent, by region and by country with regard to the greatest number of communities.
- In future the meeting of the Council will be held on two consecutive days and will not last more than one day and a half. 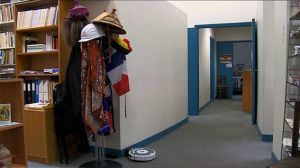 Other matters were examined during the Council of 2012, namely:

• How to deal with foundations which do not develop or do not reach maturity (the responsibility of the Orders and the Congregations; the AIM could point out the problems).

• Keep an exact count of foundations which close.

• Encourage initiative and autonomy in the members of the communities, without waiting passively for others to intervene from outside.

• Change the mentality of the young, assuming a responsibility on the basis of experience enlightened by a good formation.

• Allow people to find their true identity, not acting as clones of the founding monastery.

• Encourage clear awareness of duties which imply the exercise of responsibility. The link between responsibility and transparency needs to be developed.

• How to act with regard to new foundations, neither too little nor too much.

• How to face up to fragile communities.

• The economic, political and social crises which affect our communities.

It is clear that, after 50 years of existence, the AIM is truly being called upon to surpass itself. At the heart of this organism of Alliance each individual is invited to respond to the call of the Spirit to walk valiantly on the path of the gospel in the dynamic of the faith.