We have 168 guests and no members online

The development of male Benedictine houses between 1960 and 2010

If the work of AIM consists in taking to heart the monastic foundations across the world and accompanying them in the challenges they encounter, this research, carried out by Fr Geraldo Gonzalès y Lima, OSB, shines an objective light on the evolution of these communities during the years 1961 to 2010. The information collected comes from the official Catalogues of the Benedictine Confederation, published every five years from 1960 to 2010.[1] This research thus only covers the listed communities of Benedictine monasteries. The figures give an initial objective approach, and the tables presented summarise the data held by AIM. We did not want to give endless lists and tables of numbers which would have tired the reader out. Abbeys, conventual Priories, Priories, and their equivalents in the various Benedictine Congregations are examined. 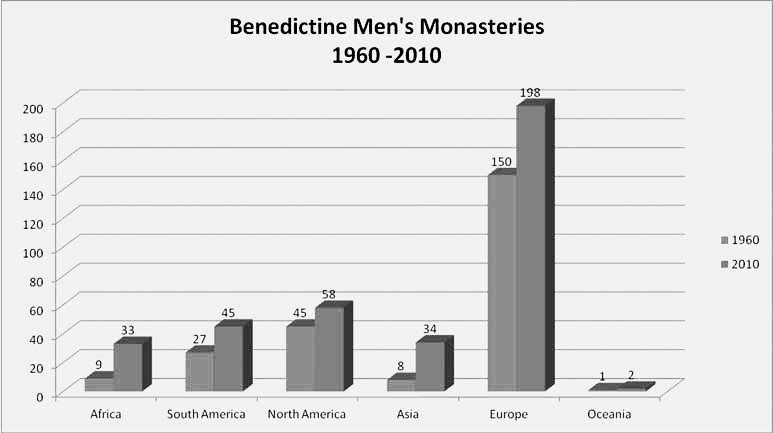 The first table, graph 1, shows the male Benedictine houses from 1960 to our day by continent. The columns reflect the number of monasteries which existed in 1960, and those which have appeared in the last fifty years.

If one goes more deeply into the history of each continent noting the foundations born and those which closed during the period from 1960 to 2010, other, complementary data are obtained. In graph 2, two studies are brought together: new monasteries compared to the monasteries which have closed during the same time period. Growth and decline are two facts which belong to religious life, with resurgences of some communities when circumstances are favourable.[2] Here is the development of the number of monasteries between 1960 and 2010. 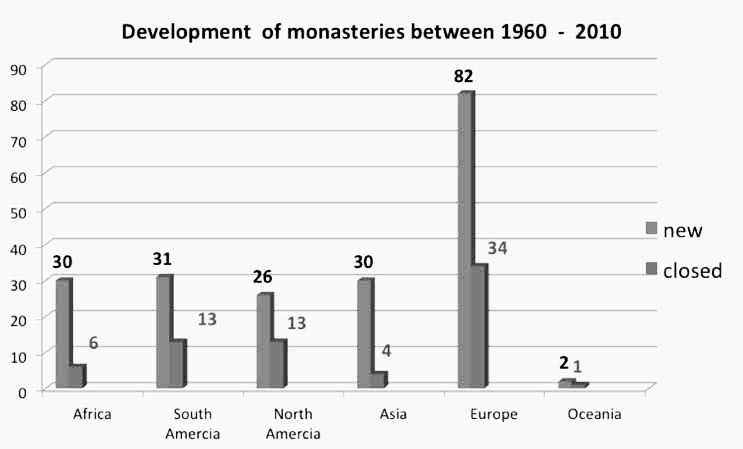 During this time the number of countries which have a Benedictine presence has grown from 45.45 per cent (20 countries). The most remarkable development has been in Africa, with twelve new countries.

A final graph shows the number of monasteries of Benedictine monks between 1880 and 2010. At the start, in 1880, there were 107 monasteries, with 2 765 monks. In 2010 there were 370 monasteries with 7 358 monks. As this table shows, the number of monks reached a peak in 1960, with 12 131, and has slowly declined to our day. The number of monasteries has gone from 107 in 1880 to 205 in 1950, to 309 in 1975 and finally to 370 in 2010. One of the important factors is the reduction of vocations in large communities, and the development of communities of 12 to 25 monks. This numeric data gives a global vision of the evolution of priories and abbeys worldwide. The Bible reminds us of the hidden temptation of censuses. At the moment it is important to emphasise, in the following chapter, the importance of a monastic formation and the reality of an evangelical and monastic life. 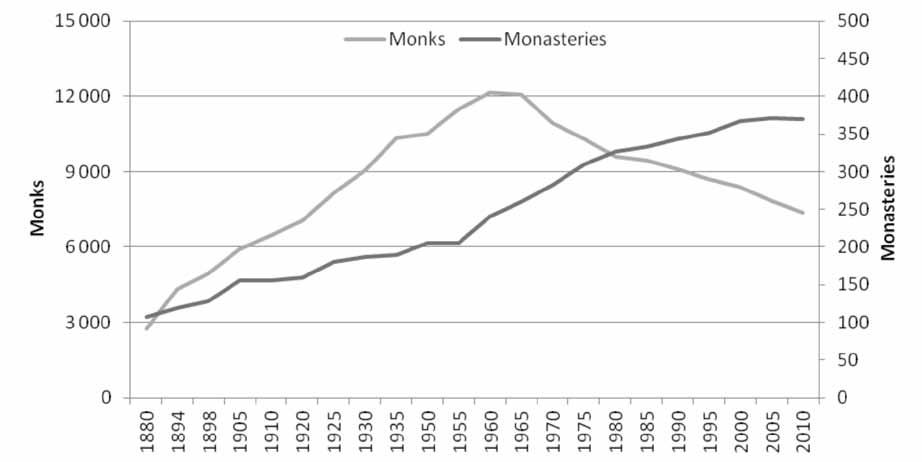 1 The data about monasteries ends at 31 December, so the 2010 Catalogue gives data up until 31 December 2009.
2 On this, see Canon Hostie’s work, Vie et mort des institutions religieuses.