We have 144 guests and no members online

The Manufacture of Coffins at New Melleray

The Manufacture of Coffins at New Melleray

What charm,(1) but also what hard work in the lovely environment of the monastery of New Melleray near Dubuque in the State of Iowa (USA), with its three thousand acres of forest and farmland! Less numerous and more advanced in age than previously, the monks continue to enjoy this place at the same time as needing to seek something which can generate sufficient income for them without causing them to sink too much under the excessive weight of the work.

It is a generation since the Abbey of New Melleray counted one hundred and fifty monks living from the revenue produced by a mixed farming enterprise of milk-cows and pigs. In recent years the abbey has depended on the gifts of guests, pensions of senior monks and the sale of soya and maize, without the income always covering the annual expenditure.

New Melleray is not the only abbey which has had to face such economic demands. Of course the Benedictine monastic life considers work to be an essential part of its charism. But with the increasing accent on technology and internet, not to mention safety regulations and legal requirements, the conception of work has changed, and the monks have been compelled to adapt to this. The community of New Melleray has found a way of earning money which is compatible with monastic life. The monks voted to give up their enterprise of animal-farming, in part because it did not leave them enough time for contemplative life. There was a feeling of dissatisfaction among some who said they had not entered the monastery to work in a factory. The monks then envisaged creating a furniture factory, but a friend who was a businessman dissuaded them. At about the same time a neighbouring farmer who had discovered an interest in the sale of coffins asked them to construct this sort of product in the monastery workshops. This seemed to have some interest, and, after the community had deliberated the proposition, a partnership was set up. To the monks this seemed appropriate since for them, according to St Benedict, every hour should be accepted as the most decisive hour of all, that of passing to the Father. 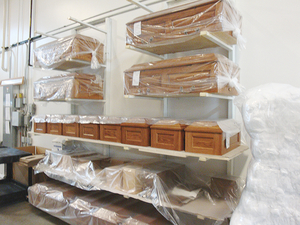 A layman manages the construction of coffins for the Trappists and supervises the workers, while the monks begin work at 9.30, pause at midday for prayer and a meal, and then return two hours later, finally putting down their saws and hammers at 4.30 to go to Vespers. Another lay person is also employed as counsellor of the families for Trappist coffins. This is a very rich contact where the Holy Spirit can be seen to be at work among the Trappists, the clients and the employees, listening to the life histories and the final days in the heart of the families. In the monastery everything necessary and possible is done to console the families. Each coffin is constructed in a spirit of contemplative prayer. After sale each coffin is blessed to mark the beginning of the final journey.

Anyone who has asked for a Trappist coffin or urn is mentioned at the commemorative Mass of the abbey. The names of the dead are inscribed in a commemorative book, and a tree is planted in the monastic forest next to New Melleray, a living memorial of the dead. A letter is sent to the families informing them how they can support the ministry of the monks, and a card on the first anniversary of death. The monks of the abbey pray for the dead and their families. All are invited to participate in the commemorative Mass, to visit the workshop and to learn about the life and activity of the community. All the clients are invited to renew contact with the monks whenever they wish. 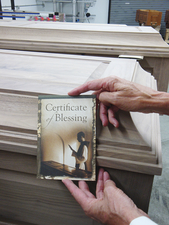 Each coffin is delivered with a cross personalised by an inscription of the name and dates of the dead person. This family remembrance is a way of honouring the dear departed each day. The massive wooden coffins come from nature and return to nature. This is a gesture of recognition of the gifts received from God. The workshop of New Melleray is not content merely to furnish a product, but sees this work as a participation in Christ’s own work of love and mercy.

(1) This article was written based on several sources of information.