We have 129 guests and no members online

The Cemetery of the Monastery of Thiên Binh

The Cemetery of the Benedictine Monastery
of Thiên Binh, open to life

Original by the standards of the Benedictine tradition, though this was no accident, the cemetery of the monastery of Thiên Binh has progressively arrived at its present shape over the years in response to its spiritual function. Open to other religious congregations, both male and female, and also to lay Catholics, it has been at the heart of a community reflection on its spiritual function.

The monastery was founded in 1970 by Father Thaddeus, who came from Thiên An, which in its turn had been founded by La Pierre-qui-Vire at the end of the 1930s. From the beginning the idea of a missionary monasticism was very prominent, especially in a difficult political situation, notably one of war. It was a matter of responding to the needs of populations displaced because of conflict, and also to give a formation to young people who had issued from modest circumstances by means of a technical school.

Today the economic and political situation is very different, but there still exists an uprooted and neglected population, migrants from the countryside who have come to seek a better standard of living in the megalopolis of Saigon. The monastery continues its efforts to respond to their urgent needs, not only in the matter of education but also in health-care. The monastery has a dispensary where the poor are treated by traditional medicine and drinking water is distributed free of charge, from a well which, thanks be to God, has never failed.

This care for physical well-being is, of course, partnered by care for spiritual health. The Benedictine monks welcome and accompany those who require it; they pray for them and celebrate Mass for their intentions. They are also full of gratitude to the benefactors who enable them to continue these activities. So without any damage to the Benedictine way of life the monastery takes a full part in dynamic interaction with the exterior and reciprocal enhancement of life. Nor are the dead excluded from this process.

Care for the Dead 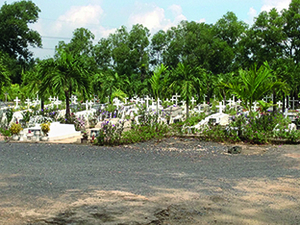 Because of the relative youth of the monastery, so far few of the monks have died, only three: Dom Thaddeus, the founder on 31st January, 1995. Nevertheless the question of the spiritual function of the cemetery arose rapidly because of concrete facts brought to the notice of Dom Thaddeus. The first people to be buried in the cemetery were the members of a poor family, victims of the explosion of a bomb at the end of the 1970s. This could not leave Dom Thaddeus unmoved, for he was always very responsive to the needs of the poor. Then the Sisters of a Vietnamese Congregation (the Lovers of the Cross) asked permission to bury their dead sisters there. Since then several other congregations of religious have made the same request. Catholic lay people have received the same privilege. There is a very practical reason for the requests, the lack of space in the metropolis of Ho-Chi-Minh City. The pressure for space is so strong that it is impossible to enlarge or even maintain cemeteries. In addition this does not enter at all into the priorities of the Communist government. Cremation, very widespread in the country and the sole possible solution in view of lack of space, remains difficult for certain Catholics to imagine. Hence the search for cemeteries.

The joy of being able to rest in peace next to a place of prayer is an equally strong motive for fervent Catholics, not only religious. This gives the cemetery of Thiên Binh an exceptional character in the Benedictine world (granted that the cemetery is outside the enclosure): an inter-congregatonal cemetery for males and females and open also to the laity. These characteristics have obliged the community to gradually clarify the spiritual function of the cemetery. Such a reflection, over several years, conducted in the light of the Holy Spirit, has led to the realisation of a sort of prolongation of the multiple exchanges which the monastery has had with the world outside it. This is founded in the communion of saints celebrated in the Church and in the memory of ancestors which is dear to the Vietnamese heart. It is in fact very important in Vietnamese culture for the living to be aware of how much they owe to those who have gone before them, and to honour these predecessors.

The diversity of the ‘inhabitants’ of the cemetery also reflects the diversity of the Church, and it is good to imagine that the interchange between the monks and the outside world, begun in this life, continues beyond death. It is good to see here a prolongation of the missionary activity so beloved of the founder and his successors. Besides, who knows the debt which the monastery owes to these ancestors who have now entered into the light of God? In exchange for a few clumps of eaarth how many graces granted by the intercession of these saints for the pursuit of activities achieved by and for the living?

The Celebration of the cycle Life-Death-Life

In thanksgiving for this communion between living and dead a Mass is celebrated every year in the early morning of 2nd November in the cemetery when the Church commemorates its faithful departed. One this occasion religious and biological families of those buried in the cemetery come together with the monastic community to pay homage to their ancestors in prayer and the celebration of the Eucharist. Incense-smoke accompanies these prayers, and the incense-sticks continue to burn on each of the tombs after the celebration. It is a very important moment of recollection which makes the mystery of life and death in the same cycle palpable.

This cycle of life-death-life is materialised in another way in the cemetery. A visitor from outside would be surprised to see many plants growing there, flowers or decorative plants on the mounds of earth, but also bushes, small palm-trees, and in one section of the cemetery plants of curcumin, whose roots will later be used by the monks for medicine. This vegetation furthermore makes the cemetery a refuge for many birds. It is therefore a space which expresses the fact, which lies at the base of our faith, that life continues and is stronger than death.

In the course of events, then, (in which the hand of God is visible) this cemetery has acted as a sort of prolongation of the missionary emphasis and the monastic welcome which lies at the heart of the Benedictine monastic vocation. By its special and open adoption into the life both of the Church and of the cycle life-death-life the cemetery reflects also the communion of saints. Let us thank God for all the fruits which this special place holds in so many hearts.