We have 106 guests and no members online

The island of San Giulio is a little rocky mountain which emerges from the waters of one of the most suggestive of the lakes of northern Italy at the foot of the Alps. In the middle of the island an ancient basilica is to be found, built in honour of the apostle of that area, a Greek priest, Julius, who died – according to tradition – at the end of the fourth or beginning of the fifth century, having built his hundredth church.

In the course of centuries history has left its majestic imprint, without ever managing to erase the grace and enchantment produced by its solitary beauty. The attractive and silky waters of the lake have provided a sort of natural enclosure which did not fail to seduce a group of nuns, called by the bishop to become guardians of the heritage of the faith of the holy apostle as much as by the search – in those troubled and difficult times – for a place adapted to prayer. Thus it is that on 11th October, 1973, the history of the Benedictine Abbey Mater Ecclesiae began.

On 21st March, 2019, the day of the Transitus of St Benedict, the sisters surrounding the bed of Mother Anna Maria Cànopi, and lavishing on her all their love, bade her their last adieu. For a long time, forty-five years, she had been their Mother, full of wisdom and guidance for the community. In the course of time she had become a personality loved and recognised by thousands of people of every origin and social class. This was brought home to us in the days before her funeral, when people of very diverse adherences approached her coffin with great emotion to bid the Mother their final adieu.

Mother Anna Maria was born on 24th April, 1931, in a town near Pavia, in the bosom of a large farming family where real Christian love reigned supreme, very simple but capable of showing itself in profound relationships of affection. Her brothers and sisters, seeing her delicate complexion, soon realised that she had not the same physical constitution as they did, and so decided, by a common agreement of the parents, to send her to study. Family trials – don’t forget that these were the cruel war years – did not spare her, and brought her real suffering. In addition, during her studies she had to put up with separation from the tender cocoon of the family. This gave her experience of the solitude of town life and opened her still more to attachment to the One who alone can fill the human heart.

Apart from her university studies she became a social worker, giving herself generously to the service of the most deprived. She once wrote, ‘I felt a great compassion for these poor people, and realising that above all they needed spiritual help, I felt myself always drawn not only to do something for them but to offer them myself, wholly and in prayer, uniting myself to the sacrifice of Jesus the Redeemer who alone can renew the interior of the heart’ (Une vie pour aimer, Interlinea, Novara 2012, p. 27).

Having understood that in order to bring Jesus to others she needed to consecrate herself to him entirely in silence and continual prayer, she began to mature her monastic vocation, and thus on 9th July, 1960, entered the Abbey of Sts Peter and Paul at Viboldone, near Milan. Among the sacrifices and renouncements which cost her most dearly was the interruption of the beginnings of a promising literary career. Some of her poems had already attracted the attention of the critics. Soon enough the Lord gave her back generously what she had sacrificed for him. Concrete circumstances put the pen back in her hands, a pen which quickly became the privileged instrument of her witness to the faith: from the first labours on the literary revision of the new Italian translation of the Bible to the composition of the Stations of the Cross at the Colosseum in 1993, requested by St John Paul II; she was the first woman invited to take this initiative. Mother Cànopi, endowed with a simple and clear style, enriched by great poetic gifts, thus achieved a reputation such as she had never imagined. She left a corresponding legacy, made up of some hundred books, translated into several languages. These books were the fruit of her lectio divina on the Word of God and the monastic teaching, as for example the work ‘Gentleness, Source of Peace’ which had a quite unexpected success, even among lay people. This great literary activity was obviously the fruit of so many hours of prayer, of retreats given to the sisters during different periods of her monastic life, and above all of her burning desire to help everyone come nearer to the Word of God.

If the environmental context of the beginning of the adventure presaged a sort of semi-eremitical life, in fact the seed of monastic life fallen among rocks flourished abundantly and beyond all hope. The poverty which we lived was a joyful one, and led us to hope for everything from the hand of the Lord. Prayer in choir was our principal activity, accompanied by manual labour and hospitality. In fact from the beginning there were many who wished to take part in our liturgy, listen to the Word of God and be schooled by the loving and spiritual guidance of our Mother Anna Maria. Very soon new sisters began to arrive and we had to resolve the question of buildings which had fallen into disrepair. Our growth did not stop there, and we were literally forced to accept the proposal of founding a priory at Saint-Oyen in the heart of the Alps, then another at Fossano in Piedmont. Soon we were also in a position to send other sisters to support other monasteries in need of help. At present our community is composed of seventy nuns, including those of various nations, drawn from other countries of Europe and indeed other continents, North and South America and Africa. With them we share the desire to live the gospel at the heart of a monastic fraternity, in order to link in prayer to the heart of every member of the family.

In the conviction, according to the teaching of our Father St Benedict, that the monastery should be a ‘house of God’, we have also welcomed among us nuns who were at Rome for studies and could not rejoin their countries of origin during vacation. This has opened our hearts to the richness of monasticism as it is lived in different cultures, and has brought us long-standing friendships. It has even happened that a Buddhist nun became particularly close to our Mother in friendship. This attitude of total openness to those who stayed with us or wrote to us, for example missionaries, has always helped us to feel at ease in all the countries of the world, in the knowledge that by prayer we could be present everywhere, where no other human aid was possible. On 11th October, 1980, when Mother Teresa of Calcutta visited our diocese of Novara, Mother Anna Maria was asked to write her a letter in the name of all contemplative sisters. In a text already of a prophetic tone Mother wrote, ‘The tension which lives in you, the burning desire of universality which carries you across all frontiers, holds me unmoved beneath the Cross, in order to rejoin the one source which conquers hatred and succeeds in uniting what is divided.’

This burning desire to adapt to each individual, to give hope to every person, has given us in our hearts a deep feeling for our society, so sick with egoism, distress and painful solitude. Mother Anna Maria shared with us a great sensibility for the weight of suffering which so many people daily off-loaded onto her maternal heart and in turn received the comfort of a fully loving attention. Even prisoners were not excluded: in her own words she visited them spiritually every morning before plunging into the choir office, moved by an intense longing of her heart to welcome all people in order to present them to the Lord. With some prisoners she held a correspondence over several years. 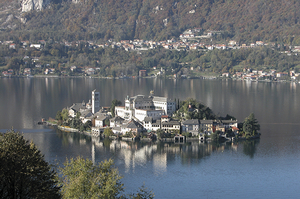 It was the ceaseless and unyielding search for humble love that upheld the perseverance of Mother Cànopi, hour by hour, day after day in the loving witness of fidelity to monastic life. Mother Anna Maria loved life deeply and naturally, as the most precious gift of all, and this gave her a special gift of intercessionn for couples desirous of a child. She never felt herself to be ‘an exceptional person’. She never adopted the stance of a ‘great leader’, but her bearing constituted an eloquent witness. An indomitable will upheld her till the last days of her earthly existence. She was always ready to offer a word to anyone who asked her advice, and to thank all those who over the years had supported the growth of the community. Endowed by nature with exceptional gifts of sensitivity and intelligence, purified by constant contact with the Lord and his Word, she approached each person with complete openness, knowing how to simplify problems presented to her, sharing her immense compassion, an unbelievable capacity to suffer with those who suffered and rejoice with those who rejoiced. Above all she was a woman of peace, forgetful of herself, capable of forgiveness, or – better still – incapable of feeling offence. Her motto, humiliter amantes expressed what she lived. She also left to the community a directive expressed by the invocation, Funda nos in pace: establish us in the Peace which is Christ himself, our unique love and our only desire.

As her physical force declined with the passage of years it seemed that by contrast her capacity increased to welcome and offer up each impairment of life, until she herself became wholly prayer. She always held between her fingers the holy rosary and never failed to follow the liturgy from her sick-bed.

She also had the humility and wisdom to arrange for her succession, taking part in the nomination of an abbess who could take up this delicate task after her. All this has allowed us to live out a profound continuity in our story, and allowed us to move forward without sterile regret for the past.

Mother Anna Maria was and remains an immense gift which the Lord made to his Church, and especially to the monastic world. Reassured by her promise to remain always with us, we would like to give heartfelt thanks for her, continuing to live everything she gave us. Only thus can we be and remain her spiritual daughters as worthily as possible.