We have 198 guests and no members online

Liturgy for the Dead (Vietnam)

Liturgy for the Dead:
Traditions of Vietnam and monastic Rites

From traditional burial to Christian burial: the lessons of history

The correspondence between funerary rites traditional in Vietnam and the tradition of the Church has a very long history. It is a matter not merely of the work of a few experts or the fruit of learned research, but rather of the whole people of God, which reflects the authentic sense of the faith within which it can mature. To estimate this we must run through the historical debates in China and Vietnam which have led to the decision to return to the cult of the ancestors.

In China and Vietnam, a historical approach 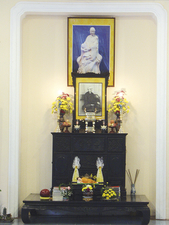 In the face of this question, Pope Clement XI, by the Decree of 20th November, 1704, put an end to the Rites Controversy by forbidding Christians to make offerings in honour of their ancestors either in the temples or in their own houses, or to keep their funerary tablets. In the Constitution Ex Illa of 19th March, 1715, he renewed these prohibitions and ordered all missionaries to swear an oath to the apostolic authorities of their mission. Pope Clement XII, in his Bull Ex Quo Singulari of 11th July, 1742, upheld the decisions of his predecessor.

To regain the unity of teaching and action in the apostolate among the missionaries of the mission to China and its neighbours, the Legate, Mgr Messabarba, by the Instruction of Macao on 4th November, 1712, authorised Chinese and Vietnamese Christians to make offerings and gestures before the tablets of dead ancestors. The decree stipulates that these offerings and gestures may be made also in a cultic building, in front of the coffin or the tomb because they express respect and piety.(2) This ruling did not, however, calm the controversies within the Christian community. By contrast, Mgr Saraceni, Vicar Apostolic of Chan-si and Chen-si, outlawed the permissions about the tablets within his vicariate, while Mgr de la Purificatiton, Bishop of Pekin, accepted it. Next, under Popes Clement XII (1730-1740) and Benedict XIV (1740-1758), the question of the cult of ancestors with relation to funerary rites does not seem to have been definitively resolved. At this moment, to avoid all doubt, the Vietnamese Catholics abandoned the installation of an altar to the ancestors and their tablets in their houses. But they remained faithful to the pious memory of the dead by forming the custom of coming together and celebrating Masses for the repose of their souls. Towards the end of the seventeenth century(3) the Jesuit missionaries maintained that the cult of ancestors was a purely civil reverence, a witness to filial piety and gratitude towards ancestors and parents who had gone before. This view was shared also by Chinese literature.(4) 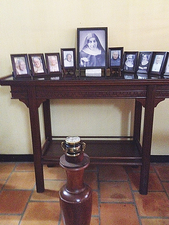 ‘It is lawful and fitting for Catholics to bow the head and make other civil marks of respect for the dead or before their images and the Tablets which bear their names’.(5)

At his arrival in Vietnam in 1628 Mgr Alexandre de Rhodes realised that certain funerary practices were superstitious and ridiculous, for example, the burning of votive papers. So he did not hesitate to condemn them. He forbade also the festival, the Cung Giô, which the Vietnamese were celebrating in memory of their dead parents. After observing what the Vietnamese were doing and what they believed he concluded that this ceremony rested on three errors: the first was that the soul of the dead persons returned into the houses of their children whenever they pleased or when their children called upon them; the second was that the dead fed upon the offerings prepared on the altar of the ancestors; the third, the most absurd, consisted in the belief that life and material prosperity depended on the dead parents, and could be blocked for ingratitude if they failed to celebrate the Cung Giô.(6) According to the Sino-Vietnamese tradition, however, lack of filial piety is considered a crime. Fr Lou Tseng Tsiang has most accurately described it in these terms:

‘Filial piety is the foundation of all moral perfection, the source of all fruitfulness, and none of our human actions escapes its laws. All people are bound to be inspired by it and to practise it in all respects.’(7)

The Re-establishment of the cult of the ancestors 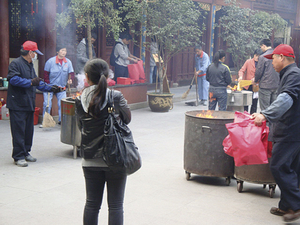 Has the cult of ancestors a religious character? If it has, why is it unacceptable to the missionaries? Accepting the survival of the dead amid the living and the good grounds for the rites performed in their honour, Tran Van Chuong writes,

‘The cult of ancestors is aimed at recalling to the living the memory of the dead. It springs from the morality which prescribes fidelity to memory’.(8)

‘This cult takes its origin in filial piety. A pious son must always have present in his memory the imperishable memory of his parents’.(9)

‘Distinctions must be made: the ritual acts concerning the cult of ancestors do not in themselves have a religious character, but this is an exception. For the immense majority of Vietnamese the ancestors continue to be part of the family after their death’.(10)

‘The offering of funerary rites to the dead should be made in the fullness of love and a solid and perfect respect… Love and honour parents after their death.’

In 1675 the Instruction to the Seminary of the Missions Étrangères states in its second directive,

‘Do not expend any zeal or advance any argument to convince these people to change their rites or customs unless they are clearly contrary to religion and morality… Introduce to them not our countries or the usages of any particular people but the faith which does not reject or harm these rites’.(12)

In this way, as we have seen the Church requires us to take time, to have prudence and discernment. It was necessary to wait for Vatican II to have a full resolution of these questions.

This is the reason why today’s Christians of Vietnam have no desire to be different from their fellow-citizens. Why? In days past the Christians were regarded by their fellow-citizens as people who had cut their roots, that is, they were suspected of abandoning the duty to pay cult to the ancestors after the funerary rites, and that condemnation persists to his day, even though the Church of Vietnam has made sure of retaining the traditional funerary rites.

• The funerary ritual of the Church, particularly in monastic life, is not content merely to mount a funerary symbolism. It has also the function of a cult, that is, the celebration of the salvific plan of God, and it proclaims its faith in the kerygma: Christ died and he is now risen and, with him, all those who believe in his name.

• The accent is placed on the dead person who is participating for the last time in the liturgical assembly, and for whom one is praying, and also on the living who need the consolation of hope.

• The body is an integral part of the person. Deprived of life, it is not ranked as a mere object. It is the body of a particular person, a body which has shown love, tenderness, friendship, which has been marked by the sickness, by the whole history of this person. A body whose wounds are called to the transfiguration of the Resurrection. The body of the baptised dead person has become the Temple of the Spirit, touched by sacramental actions of the Church, nourished by the Eucharist. The way in which it is honoured at the funeral bespeaks the immense dignity of its vocation to eternity(13).

Next, the ritual is the expression of a theology. To begin with, this theology expresses the link which exists between the Passover of Christ and that of the dead person. This participation in the paschal mystery of Christ is linked in a significant way to the baptism by which we have been incorporated into Christ. The paschal character of death is marked also by the fact that it is a veritable transitus to eternal life, and is a communion of saints for the soul already purified and waiting in corpore (in the body) for the resurrection of the dead. In addition, the theology of the ritual recalls that the Church never ceases to believe that the communion of all its members in Christ ‘gains for each one a spiritual help by offering to the others the consolation of hope’. Finally, the ritual underlines the importance of honouring the bodies of the dead, since they have been the temples of the Holy Spirit.

Thus what we suggest is that we must avoid the danger of keeping in the expressions of popular piety towards the dead those unacceptable elements and aspects of the pagan cult of our ancestors, such as the invocation of the dead by means of practices of divination. Additionally, being Christans, we need to familiarise ourselves with the thought of death, and accept this reality in peace and serenity(14) since Christ died and is risen. However, this proposed adaptation certainly brings with it a difficulty with regard to the traditions long anchored in Vietnam.

(1) Exterior actions such as bows, prostrations and offerings are practically the same in the cult of the ancestors and in the Christian rites of burial. But do they have the same meaning?

(4) The study of Chinese philosophy and of the ancient books on which these rites were based leads to the understanding that the sacrifices offered to the ancestors express only the homage of gratitude and a profound respect which excludes any religious dimension.

(11) Quoted in the edition of pieces presented by the Jesuits to the Congregation to answer the ‘Questions about China and its neighbour’ in the archives of the Missions Étrangères.

(14) The Vietnamese have the custom of crying out loudly before the body of the dead, and this funerary rite is sometimes ambiguous about the presence or absence of the dead person.