We have 48 guests and no members online

Nature, between heaven and earth.

Koningsakker, the natural Cemetery
of a monastic Community

But what is a natural cemetery? Why does a Cistercian abbey make a fuss about the use of such a cemetery? Is this compatible with monastic life? These are reasonable questions which spontaneously arise when one speaks of the kind of project. The purpose of this article is to offer some elements of an answer both by explaining the concept of a natural cemetery and by sketching the development of the project. This initiative, unprecedented in Europe, has raised many community reflections on the monastic, cultural and ecclesial issues of such a project.

1. Nature, the final resting-place on earth

We may have forgotten that nature is certainly the most natural place where human beings have always been buried. Of course the requirements of ritual, places, and symbols have rapidly led to the development of specific places where people have expressed themselves in one way or another according to their religion and culture. The current situation of inhabitants of overcrowded cities, whether religious or secular, the closure of many parish churches, the need for relations of the dead to renew their time-limited concessions, family displacements within or beyond the country of origin, and also of course the increasing prevalence of cremation, have all put a question-mark to our way of burying the dead. The appearance of a natural cemetery falls into line with these reflections. They began in England but were soon exported to the Netherlands, and the movement has undergone considerable expansion in the last ten years.

The principle of this kind of cemetery is simple, burial of a dead person in nature, returning the body to nature. There is no distinctive mark, no stone, no cross, no enclosure. The principle is that nature itself will take care of the tomb. Living nature continues to develop. This makes clear the close link between life and death, at least on the natural plane. To carry this link a little further, this concept of cemetery also aims to chime in with the the development and preservation of nature. In fact certain cemeteries have also the concrete purpose – and this is the case with Koningskker – of ‘creating’ nature. Koningsakker has transformed forty acres of maize-field into a natural reservation in harmony with the environment. This natural reservation plays its part in the development of flora and fauna of our region. In the Netherlands conservation is considered important, and land use is firmly linked to preservation of nature. 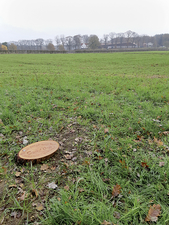 In concrete terms, someone wishing to be buried in our cemetery chooses a place, which is then recorded in the GPS system. It is therefore always possible to find the tomb, even in the middle of a field of heather. The person buys the right to be buried in this position for an undetermined time. It will remain there always and nothing will be done to the tomb. When all the tombs have been sold the nature reserve will endure. After burial the relations may choose to plant a wooden roundel with an engraving of the name of the dead person. This roundel, like everything buried with the person, is biodegradable.

Apart from the ecological aspect, the human aspect plays a large part in this project, including human accompaniment at every stage. Beside a constant welcoming staff at the cemetery, every stage from the choice of the position, through the burial itself to the visits of relations after the funeral is carefully accompanied by a competent and trained staff. The staff is there to listen, accompany and provide counselling. Care of nature and of persons is a constant feature in this type of project.

2. The Birth of a Cemetery

How did we come to embark on this project? It was the fruit of a slow community process. Two independent elements met to put us on this track. The first was concern to be sure of a zone of silence around the monastery. The community moved ten years ago because of the expansion of the town where the monastery was previously situated. We did not wish to live through again the same sort of scenario, which is not so simple in a country with such an intensity of population. The maize-fields attached to the monastery were a risk for our solitude. An opportunity to buy this land presented itself and we felt a call. At the same time our own monastic economy experienced a structural disequilibrium which needed to be solved. These were the basic ingredients. At first sight the idea of developing a cemetery seemed to us ridiculous. In any case, we did not know what we were talking about. Little by little we informed ourselves, we visited other places were such a project had been realised, and we exchanged ideas about the possibility. After the first reaction of rejection in the face of the idea of living next to a cemetery, other arguments began to arise: the encyclical Laudato Si’, ecology, a new relationship between death and ways of burying, the lay-out of our property, the instruction of St Benedict in Chapter 4 ‘to have death daily before our eyes’, the current attitude to the earth and our management of it. We needed to reflect also on our Catholic identity in the heart of a Protestant region. The cemetery is not a Catholic cemetery for, as for all our guest arrangements, we wanted to be open to everyone. We want to be quite clear about our Christian and Catholic identity. Anyone who wants to be buried here must respect this, just as our guests must respect our way of receiving guests. Despite the extremely secular surroundings in which we live, the people are aware of our witness in this project. For them too, as for their families, it is a way of making contact with the abbey. 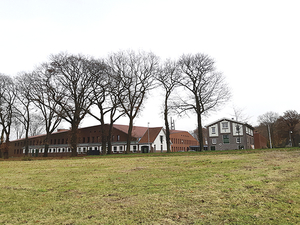 Koningsakker opened its gate, one might say, on 1st September, 2019. As in the whole country, there is a real taste for this new kind of cemetery and the initiative from which it flows. For us this is a confirmation of our decision. Nevertheless, it remains for us to keep a close eye on the project, to listen to what is done there, to adapt the formula to requirements and to our objectives. The community has lived through a constructive experience during the development of this project. We live it as a witness to our faith in the resurrection at the heart of a contemporary ecological advance. We work in concert with the people in this line of business. The cemetery is run by layfolk, but we observe a discrete presence, and especially pray for the dead who are buried in our cemetery. Paradoxically enough, the development of this project, which was a load to bear, has refreshed our community and united us around an innovative and risky project, which has already begun to bear fruit.