We have 213 guests and no members online

Report on the Monastic
Formators’ Programme of ABECCA
held in Guatemala, 14-23 July 2019

ABBECA, initiated in 1978, assembles communities from 17 countries and 53 communities in the region. Regularly, Benedictines and Cistercians gather every four years to interact and share experiences accompanied by conferences in different countries within the region. It is a time when communities can gather despite the difficulties of long distances and low numbers of people to send from each community.

The last assembly of ABECCA took place in Bogotá in July 2017. As a result of that meeting, the participants expressed the need to help both the formators and those in formation, because they are an important part for the future of the monastic life in Latin America and the Caribbean. There were some who asked for ABECCA to organize a course for juniors and novices, but others thought it would be better at that stage to help the formators to execute their role, so it affects also those who are being formed and the whole community in something relevant to continuous formation.

In October 2018, the council of ABECCA met in Guatemala to sort out dates, themes and speakers for the first Monastic Formators’ Course which ABECCA organizes. The idea was to find a topic which could form the solid base for future courses and that may help the communities in formation. Thus, after a thoughtful deliberation, it was decided to touch a theme related to the problem of lack of maturity in the process of formation, before and after profession.

Attention focused first of all on the grounds of Monastic Tradition in order to be aware how to pass on from the seniors to the juniors, from a Mother House to a daughter house, from the formators to those in formation. It is intrinsic to monastic life to be aware of the Monastic Fathers, the Rule of St Benedict and the application of this tradition to the present life. The second branch to grasp was attention on the human person, how affection and emotions are relevant in the process of formation to help candidates to mature in monastic life and as a Christian. The human side involves, of course, those in formation, formators and the whole community. Humanity touches the depth of each member of any community. Finally, the attention was focused on the spiritual side, coming from the first two grounds, monastic tradition and human behaviour, in order to allow the Spirit to act in God’s call to live a mature monastic life. 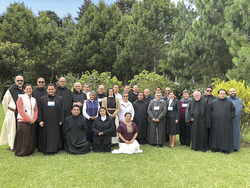 From 14-23 July, monks and nuns, brothers and sisters, gathered at Guatemala to participate in the first Monastic Formators’ Course organized by ABECCA. There were 26 participants from different countries from Mexico to Peru, from north, centre and South America and the Caribbean Islands. Some of the participants had years of experience as formators, others had recently been appointed to accompany newcomers. We were fortunate also to have well-known speakers: Abbot Paul Stonham, OSB, from Belmont Abbey, conducted the first three days on the acknowledgement of the monastic Fathers, and pointed out how monastic tradition from early Christianity was relevant to the present life in Latin American Church. Sr Marta Inés Restrepo, a psychoanalyst and licensed in Spiritual Accompaniment, led two days of conferences on human behaviour and the dignity of the human person. Finally Abbot Bernardo Olivera, OCSO, the well-known former Abbot General of the Cistercians, led three days of conferences on the Spiritual journey, using Tradition and human behaviour in order to point out the real aim in monastic life, using practical examples of how to live a monastic life maturely. I can say that the three speakers were excellent in their contributions to the group.

For their part, the participants were able to share their experiences, doubts and richness in their role as formators. They gathered twice a day, after two conferences given in the mornings. At the end of the day we had a plenary where everybody was able to speak and to share what they had discussed in the group. In fact, by the assistance of others, the participants were encouraged and supported to face the challenges of the situation of their own communities.

The common vision of living a monastic life in the plurality of work allowed the first monastic course for formators to be fruitful. The shared culture made it possible, and also the need to grow as instruments of God’s grace in one’s community. However, it may be said that in ABECCA there are also countries in which there is only one male or female monastery. An isolated community finds it difficult to relate to other monastic formators and so to share the burdens and challenges which society presents. The need to promote such meetings seems obvious, but especially to use it for something productive and valuable. By organizing courses like this, ABECCA seems to be finding a way forward to letting communities grow at home. Consequently this the first Monastic Formators’ Course was felt to be an answer to God’s will for the benefit of each community in the region.