We have 166 guests and no members online

A journey in Mainland China

A journey in Mainland China[1]

As a sequel to the international meeting of the BEAO at Taipei (Taiwan) Dom Mark Butlin and I had the chance to visit various aspects of mainland China and some monastic sites in that country. It is not possible to reconstruct in detail the journey we made and the numerous experiences we had. However, it is useful to give an outline of this impressive foray into the Empire of the Centre.

The day after our arrival in Beijing we began with a marvellous visit to the Great Wall of China – a test of our physical fitness! In the afternoon we visited one of the great churches in the north of Pekin, known as the Cathedral of the Holy Saviour, where we met the parish priest and had a long conversation with him. The church has recently been completely restored, and the alley leading to the church is bordered by angels blowing the trumpet. It was already Christmas there! First Vespers opened the season of Advent.

It is important to remember that in September 2018 a treaty was signed between the Holy See (which has recognised seven bishops of the patriotic Church) and China, who will no longer appoint bishops without the consent of the Vatican. There are at present between ten and fifteen million Catholics in the People’s Republic of China. The Association of the Catholic Patriotic Church of China counts ninety-seven official dioceses, but the Catholic Church itself numbers as many as 138, with a number of empty sees. For the First Sunday of Advent we celebrated Mass at the actual cathedral of Beijing, dedicated to the Immaculate Conception of the Virgin Mary, in the south of the city.

After the Mass, a well attended and finely executed liturgy, we visited the remaining buildings of the University Fu Jen. This fine institution was established in 1933 by monks of St Vincent of Latrobe in Pennsylvania. Next we went to the seminary of Beijing, whose Rector received his theological training at St Vincent’s. We met the fifty seminarians and inspected the spacious and well-organised halls. The library which has just been built is well adapted. The church is vast and functions also as the parish church, in which a certain number of seminarians are doing their pastoral service.

On 3rd December, the feast of St Francis Xavier, we left in the early morning for Manchuria, where we were to meet the community of the Holy Cross a couple of hours from the town of Changchun. We were near Songhur, some 60km from Jilin. The priory is the fruit of a long history. In fact the monks of St Ottilien (Germany) had founded a monastery at Yenki, which later became a Vicariate Apostolic. But between 1946 and 1952 the monks were persecuted and controlled by the civil authorities. Some returned to Germany, some fled to South Korea where they established a monastery which would provide roots for the monastery of Waegwan which still exists. In 2001, after half a century of absence from China, the Congregation of St Ottilien returned to found a monastery in the region of Jilin, at first in a parish, but now in the house where we were located. The leading spirit in this initiative was a Chinese priest who had been formed in St Ottilien and had returned after making his solemn profession.

The monks live the Rule of St Benedict. A house for senior citizens is linked to the monastery as well as a resource-centre for the priests of neighbouring dioceses. The monks also administer the parish where they were first planted.

The next day we left for Jilin, where we were to see primarily the cathedral which has been recently renovated. Then we went to the diocesan seminary where we were received by the Rector and the Bursar. We shared a meal with the seminarians, about seventy of them, for a score of dioceses. The establishment has a very good reputation. The Rector did some of his theological studies in Rome; he has an open spirit and welcomes new ideas. Then we returned and stayed at the church which the monks still hold and serve since they were first established. At supper we gave a full account of our journey. 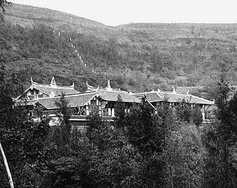 On Wednesday 5th December we flew from Changchun to Beijing, where we visited the imperial city: mind-blowing! The next day we flew to Chengdu, the capital of Sichuan, to visit the town of Xishan and visit the old monastery founded by Dom Jehan Joliet and the monks of St André at Bruges. The monastery is not far from the town, reached by a small road which leads to the foot of a mountain whose summit holds the Christian cemetery. The monastic buildings remained unchanged. They were built in the 1930s and are now the residence of the Bishop of Nanchong, and include a residence for senior citizens. A sanctuary has been built there, with a huge Way of the Cross which leads to the tombs of the first two priors, some monks, some sisters and other Christians.

We had a long conversation with the bishop and made a full visit of the places, chapter-house, cells, refectory. Then we took the Way of the Cross to the tombs of the founders. In accord with the Chinese custom they had been cremated and put in niches with an inscription commemorating their wisdom. The first founder was Jehan Joliet. He was born in France at Dijon in 1870. After his naval studies with the Jesuits he became a naval officer and visited China in the course of his duties. He was fascinated by the richness and depths of culture in the country. He was shocked by the lack of esteem which the missionaries then had for the culture and began to reflect on the possibilities of evangelisation with respect for the local mentality. In 1894 he entered the Abbey of Solesmes (which was then in exile on the Isle of Wight in England), with the hope of one day making a foundation in China. Later he came in contact with Dom Theodore Nève, abbot of St André in Bruges. Finally he left with a monk of St André for China with the mission of making a foundation. This took place in 1929 in the Province of Sichuan at a place called Xishan. However, after a few years, a difference of opinion about inculturation induced Dom Joliet to give up his office and become a hermit. He died in 1937, leaving a body of original ideas, far ahead of his time.

After lunch we returned to Chengdu where we were to meet the bishop that evening; he has been in office for two years and spoke to us of his ministry. The next day we flew to Shanghai, where we met up with a French Jesuit, now at Shanghai after many years at Taipei; we spent a couple of hours with him and promised to meet again in France. Next we went to the cathedral of Shanghai, founded by the Jesuits. We arrived at the end of a Mass celebrated in Chinese, The church was full to overflowing. It has been wholly renovated in recent years. After Mass the parish priest of the cathedral and a priest friend showed us round the diocesan house, where a number of priests live, and we walked along the river to the mythical quarter of the Bund, The same evening we flew to Hong Kong.

The next day the Abbot of Lantao, Dom Paul Kao, came to meet us to take us to his monastery on the island of Lantao. The foundation of the monastery goes back to 1946 and it owe its origin to two groups of monks who had fled from mainland China as a result of Communist persecution. A community of some fifteen monks, including one who had a formation as an architect, built this monastery in a deserted spot where the transport of stone and road-building was a real challenge. The buildings consist of a rectangle formed by two wings which contain the conventual items, cells and two corridors joined on at the end. Beyond that is situated the church in the form of the prow of a ship above the sea, with its stone bell-tower in the form of a mast. The infirmary is a new building, Lower down the spacious guest-house welcomes numerous retreatants in its sixteen bedrooms, meeting-rooms and refectory.

We met the community for the office and lunch and the afternoon was soon gone. In the evening Dom Mark made a presentation to the community on the work of the AIM. The next day he went off to Macao to meet the new foundation of Trappistines of Vitorchiano, while I set off for Paris, where I set foot on French soil after a journey of sixteen hours.

[1] A continuation of the journey on the occasion of the meeting of the Benedictine Association of East Asia and Oceania (BEAO) contained in Bulletin 116, pp. 62-67.