We have 213 guests and no members online

The Benedictine Sisters of the Epiphany
Monastery of Lộc Nam, Vietnam

Liturgy in Vietnam, a monastic liturgy

This phrase of the psalter was meditated and ruminated by St Benedict. He put it into practice and instructed his disciples to do the same. In truth the Fathers of the desert and the early monks before St Benedict had already practised psalmody and continuous meditation of the Word. They had made prayer the centre of their lives. The Vietnamese are very aware of this heritage. 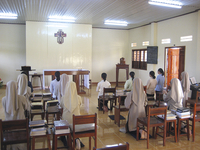 The Vietnamese have been influenced by the religions and culture of China through the medium of Buddhism, Confucianism and Taoism. These three ‘religions’ are deeply rooted in the hearts of the Vietnamese and constitute an important aspect of their own culture. In Vietnam, even though Jesus Christ was still unknown, there was already a belief in a mysterious God, good and protective. This was, of course, the reason why the Vietnamese considered prayer an indispensable means. They prayed to God, Buddha or the ancestors; there are numerous temples. The European missionaries such as the Jesuits or the Fathers of the Missions Etrangères of Paris brought faith in Jesus Christ to Vietnam in the middle of the seventeenth century. Since then a certain number of Vietnamese have come to know Christ and believed in him.

The liturgy of the Church in Vietnam well reflects the culture of the country: this is the case, for example, when incense is burnt with hands joined as a sign of respect and honour for the ancestors at a time of mourning in the family or on an anniversary of death, and especially during the three days of Tet, the Asiatic New Year festival. The monastic seed which grants a large place to the liturgy is well developed in Vietnam among the Carmelites, Cistercians, Poor Clares and Benedictines. The liturgy of the Eucharist and the liturgy of the hours of these monks and nuns express a significant effort to integrate them into Vietnamese culture.

Although, or perhaps because, Vietnamese Christians are not numerous in Vietnam, their hearts are especially fervent. They come in droves to the Sunday Mass and even during the week. They also take part in the activities of the parish in general, though the Eucharistic liturgy is a priority for them. Monastic communities celebrate the Mass each day. In our monastery of Lộc Nam the parish priest celebrates the Mass each day, and although the faithful live some distance away they attend in large numbers quite early every morning. We have arranged an exterior place for this Eucharist in order to welcome all those who take part, since the oratory of the monastery would not be sufficiently large. The first of the three days of Tet is consecrated to prayer for peace in our country, the second to prayer in honour of the ancestors; on this occasion children gather around their parents and grandparents. The third is dedicated to the sanctification of work. On these days the liturgy is prepared with special care and we use the traditional decorations of the country.

The liturgy of the hours

Apart from the Eucharist, every day we gather to pray the psalms at Lauds, Sext, None, Vespers, Compline and Vigils. The hundred and fifty psalms, the canticles of the Old and New Testaments are distributed over two weeks. In addition there is adoration of the Blessed Sacrament three times a week, and each sister spends at least ninety minutes in lectio divina each day. Since Vatican II the texts of the Holy Scripture and the liturgy of the hours have been translated into Vietnamese. A work of adaptation and musical composition has allowed especially the psalms to be chanted according to the genius of the Vietnamese language, which is of course a tonal language. Monks and nuns can thus understand the texts well and pray them with fervour. This work of translation and composition has been being conducted by a group of competent people since 1971. Apart from translation of the Bible and especially of the psalms, very faithful to the originals, a national poetic literature has been pressed into service: there are many liturgical hymns. In the psalms the violent verses have not been retained, since this is permitted by the liturgical norms. Texts such as, ‘Accuse, Lord, those who accuse me. Attack those who attack me’ (Ps 34.1) and similar verses are not sung, for they would cause serious difficulty according to the Vietnamese culture.

Vietnamese music is marked by improvisation and the intonation of the Vietnamese language. This language is a special synthesis of Chinese, Indian, Indonesian, Eastern and Buddhist influences. It is the official language of Vietnam, and is the maternal tongue of about 85% of the population. It is a monosyllabic language, using a system of six tones. A thousand years of occupation by the Chinese led to the adoption of a large number of Chinese words and of the ancient writing in Chinese symbols, which has now been abandoned. In the Latinised script now in use, the words appear as a succession of monosyllables. The tonal modulations and differences of pronunciation in the North, Centre and South of the country can make Vietnamese difficult for a foreigner to understand, but this gives it a peculiar charm, especially in its musicality during the liturgy and above all in the psalmody. There is a further marked difference between the mountainous and coastal regions.

Although there is still a classical music, folk music is well developed all over the country. Vietnamese Buddhism has a very rich sung music born in the nineteenth century under the influence of court music.

Musical instruments are many in traditional culture, gong, tambourine, flutes, harps of sixteen strings, monochords. That is why we have been encouraged to use these instruments in the liturgy for the purpose of inculturation. Musicians among monks and nuns are composing psalms, hymns and canticles on popular melodies of the different regions of the country, which increase the beauty, joy and fervour of the liturgical services.

We are glad to thank the Lord who has called us to the monastic life. By the liturgical prayer and quiet meditation which form a large part of our life we work day by day to become one in Jesus Christ, who has shown us his unity with the Father and the Holy Spirit throughout our lives to guide us all together to eternal life. By the rhythm of the liturgy Vietnamese monks and nuns are careful to remain faithful to their vocation in the People of God. The more we pray, the more we love one another, singing with all our hearts with the psalmist,