We have 64 guests and no members online

The Monastery of Boa Vista

The Monastery of Boa Vista

The monastery of Quilvo in Chile founded the monastery of Notre-Dame de Boa Vista in Brazil in January 2010. The eight founding sisters at first lived in the town of Rio Negrinho for three and a half years while the first part of the monastery was being built.

The monastery of Boa Vista was conceived as the mother-house of Quilvo through the attempt to preserve the classic structure of a Cistercian monastery, adapted to the geographical situation, to the culture of the country and to the needs of the community. The main silent cloister is a square space centred on a great fountain, and from it open up the ‘normal features’, the church, the Latin cross, the scriptorium, the library, the refectory, the office of the Superior, the porter’s lodge and the parlours. Other small cloisters lighten the construction, around which open all the other spaces for work, bedrooms and infirmary. The infirmary has direct access to the church by a corridor which gives into the main cloister. Another small cloister, also square, with a statue of Our Lady in the centre, harbours the noviciate, surrounded by cells, the scriptorium and the various rooms for teaching and meeting required by noviciate life.

The building is situated on the top of a hill with a 360-degree view. It is surrounded by natural forests with many pine trees, the emblem of the south of Brazil. Around these woods flows the River Negrinho, with a strange beauty because of its many rocks and waterfalls all along its course. At the entry to the monastery property the view offers many surprises, with a spacious view of the monastery on the hill, surrounded by woods, making a gentle solidity like hands embracing it on three sides, a invitation to prayer and reflection. As one approaches one sees the monastery grow because of its position on higher flat ground, in a way which invites the visitor to a meeting with the Divine. The first sighting is of the church, conceived as if the hands of Our Lady, in the form of the roof, are protecting the monastery.

The monastery is built on a plan without crossing paths, that is to say that the areas are organised in such a way that the activities breed harmony, while still being differentiated by the activities which occur in them. For example the areas for work are totally separated from those for repose, prayer and reflection and other activities. 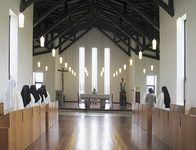 The materials for the monastery were planned so that the main body should be simple, but durable and easily maintained, while retaining the plastic and visual beauty indispensible for a contemplative life at the heart of the monastery. Local materials were used, such as plastered brick for the walls and tiles, and wood which gives a warm environment, and keeps the proportions to human size, despite the extensive surface of the roofs. A little further off, the guest-house was built in the same spirit, but without impinging on the view of the monastery. There is also a chocolate factory further back, which does not spoil the general view of the monastery. The external paths have also been carefully placed to separate the zone of the cloister from the other parts of the monastery, thus retaining total intimacy for the community.

The community is very grateful to the architect, Aberto Celli of Curitiba, who has succeeded in making a solid construction, spacious and well-lit. On 9th April, 2018, by its vow of stability, the monastery will be raised into an autonomous community of the Trappist Order.