We have 174 guests and no members online

The Benedictine Sisters of Kaunas

Bulletin of the AIM

The Benedictine Sisters of Kaunas
in Lithuania 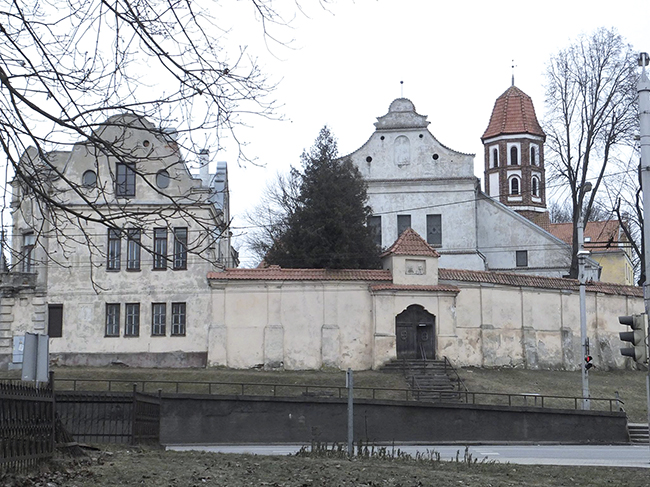 The first Benedictine sisters arrived at Kaunas from Nesvyziaus (now in Bielorussia) in 1624. During the first half of the seventeenth century the Benedictine community of Nesvyziaus founded monasteries at Vilnius, Kaunas, Kraziai, Minsk, Orsa and Smolensk. On the initiative of a Lithuanian nobleman, Andries Skorulskis, the Grand Duke of Lithuania and king of Poland, Sigismond III, gave to the sisters at Kaunas the church of St Nicholas adjoining the monastery. After a short while the sisters (they were about twice as many as the monks in Lithuania, some 110-120) became the leading community of religious in Lithuania. Their monasteries were distinguished by their well-provided libraries, their activities in the fields of publishing and education; they accepted and formed young girls of high society and later cared for the poor.

In the middle of the seventeenth century the war of the Republic of Two Nations (Poland-Lithuania) against Russia was one of the most terrible in the history of the Grand Duchy of Lithuania. On 18th August 1655 the Russian army occupied the city. The monasteries and churches were destroyed. Five sisters of the monastery of Vilnius were killed, others fled to the monastery of Kaunas. It seems that the sisters who fled spent the war years in Palivarkas (agricultural or manufacturing sites). In 1657 the first abbess of Kaunas, Mother Ona Eufemia Skorulskyte, died.

The Russians did not leave Kaunas until 2nd December 1661. This occupation had a great effect on all the citizens of Kaunas. In addition to the devastation by the army, an epidemic of plague and famine began. Because of the war, the Benedictine sisters of Smolensk and Orsa left. What happened to the Benedictine sisters of Minsk, invaded by the Cossacks in 1655, is not known. Those of Mesvyziaus fled to Gdansk, where they passed the war years. Vilnius was captured by the Russians at the end of July 1655. The sisters who survived the massacre were allowed to wear a red cross embroidered on their clothing; the same applied to those of Kaunas. The same year, the western part of the Grand Duchy of Lithuania was attacked by another enemy, Sweden (the first Northern War, 1655-1660). The military disasters of this time were known in Poland-Lithuania as ‘the Flood’. After this terrible period the community of Kaunas recovered and renewed its traditions, although it was smaller in size than the other monasteries of the region.

In 1793 and 1795 took place the second and third partitions of Poland and the Baltic region, and present-day Lithuania fell under Russian domination. The Tsars always considered this region as ‘Russian land acquired long ago’ and attempted to colonise it into its own territory. The Russian government closed the University of Vilnius, outlawed the speaking of Lithuanian in public places and the publication of books and periodicals in Latin script; non-Russians had no right to purchase land, etc. the name of Lithuania was obliterated from the map, and replaced by ‘North-Western region’. Catholicism, deeply rooted in mentalities and customs, was the greatest obstacle to russification; for a long time it was considered the greatest enemy by slavophiles and the Russian government.

After the first rebellion of 1831 against Russian occupation reprisals inflicted heavy damage on the church and the clergy. Decrees of the Tsar for secularisation of land deprived the Church of 260 properties, with the result that its material basis was too weak to maintain seminaries, publish books or relieve the poor. After the rebellion of 1863 persecutions doubled: several priests were shot or hanged, many were deported to Siberia. In 1864 the Tsarist government forbade the entry of new recruits into the monasteries. The sisters of Kaunas tried to conceal the real number of nuns from the authorities, but they could not resist the demands of the Tsar. 352 monasteries were closed, churches were transformed into places of Orthodox worship, barracks, hospitals or schools. Crosses on monuments were forbidden. In addition, a host of means was used to strengthen the influence of Orthodoxy. There was intensive building of Orthodox churches, and incentives were given to Russian farmers to settle in Lithuania. Any orphans were baptised into the Orthodox faith and families were forced to practise Orthodoxy on pain of exile. Parish churches were closed and state schools put under surveillance. From 1880 onwards, on any festival of the Russian dynasty Catholic children were forced to pray in Orthodox churches.

The order of the Tsar on 24th December 1891 to close the monastery and church of the Benedictine sisters of Kraziai was the spark which lit the powder: the humiliations undergone for so many years exploded in an opposition of a different kind: revolt! The aged nuns, despite their weakness and begging, were expelled from their monastery, which was closed. When the parishioners found themselves forbidden to reconstruct their ancient church, all their efforts turned to the use of the church of the monastery. Their requests to several state institutions were unsuccessful.

On 22nd June 1893 an order of the Tsar imposed the destruction of the monastery and church. The people of Kraziai immediately sent envoys to St Petersburg, Vilnius and Kaunas. From September onwards the parishioners occupied their church, watching over it day and night, and ringing the bells at any approach of the police. Some four hundred faithful faced up to the forces of the state. On 21st November 1893, helped by three hundred Cossacks and seventy police, the governor of Kaunas closed the building by force. This episode is called ‘the massacre of Kraziai’; it aroused international indignation and laid bare the Tsar’s policy in Lithuania.

Between the two World Wars the Benedictine sisters of Vilnius and Kaunas who had been able to keep their monasteries during the Tsarist persecution experienced a period of renewal. Nevertheless, after the first World War and for several years, the abbess of Kaunas promoted Polish culture in the monastery, and rivalry between the Polish and Lithuanian sisters began. The Holy See was informed, and it was decided that the community should be split in two. Ten Polish sisters, including the abbess, went to live in the monastery of Kolainiai.

The community of Kaunas began a period of prosperity and renewal. The sisters were full of enthusiasm and wanted to live in a new spirit, but keeping the Benedictine charism. In 1926 Blessed Jurgis Matulaitis (1871-1927), at that time Apostolic Visitor of Lithuania, helped the renewal of Benedictine life of the sisters. He chose for them the Constitutions of the Benedictine sisters of the United States, and the contemplative sisters adopted a mode of life which united prayer and apostolate. They worked in kindergartens, orphanages, retreats for the elderly and schools. As their numbers increased they founded other houses in Lithuania. In 1940 perpetual adoration was begun in the Benedictine church.

After the Second World War the Soviet government forbade monastic life. In 1948 the sisters of Kaunas were given 24 hours to leave their house. The church was closed and handed over to the national library of Kaunas. Some of the Benedictine sisters of Vilnius returned to Poland, taking with them the archives of the monastery. The sisters who remained in Lithuania were to suffer the persecutions of the Soviet regime, interrogations about their religious activities, deprivation of work. During the darkest day of Lithuanian history the sisters nevertheless remained faithful to their monastic life in secret. They supported the faithful by their discrete presence in various places, kindergartens, schools, hospitals.

In 1990 the church was given back to the faithful. It was restored and consecrated in 1992. This was the first stage of the return of the sisters and of the renewal of community life. Since 2009 the church of St Nicholas belongs to the Benedictine sisters as their conventual church. At present the community is enjoying a period of prosperity. 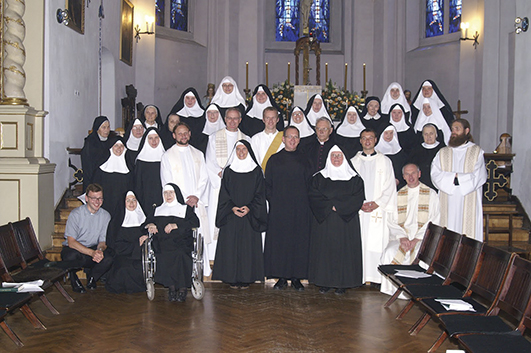 The monastery of St Benedict at Kaunas is a ‘school of the Lord’s service’ in which, under the guidance of the Gospel, the sisters serve one another. ‘The seniors are honoured and the juniors are loved’ (Rule, c. 4). The sisters are invited to prefer nothing to Christ, who is leading them all together to eternal life (Rule, c. 72). Their life is divided between liturgy, personal prayer, lectio divina, adoration, catechesis of children and adults, spiritual accompaniment and teaching. Guests who come are received as Christ; to all is paid the same honour, with special attention to the poor and pilgrims because especially in them Christ is received. The sisters have been present in Lithuania for 400 years without a break.

[1] This article is a synthesis of information found on various websites of the monasteries concerned. It has been reviewed by the sisters of Kaunas. Cf. https://kaunobenediktines.wordpress.com/; http://www.cahiers-lituaniens.org/documents/index.htm.