We have 194 guests and no members online

The Eight Degree of Humility

The Eighth Degree of Humility

In the course of the Symposium of the CIB several workshops studied aspects of the Rule pertaining to listening with the heart. Mother Hannah considers the eighth degree of humility in the Rule and how we may learn from older members of the community who transmit the wisdom of previous generations.

In our community we go to funerals of close family members, i.e. parents, grandparents, perhaps brothers and sisters. Generally, that is the extent to which we go, unless there are special reasons - of course in accordance with the superior as it should always be the case.
One day a sister ‘informed’ me that she was going to the funeral of a distant relative. I was quite dumbfounded by the explanation she gave; it left me no chance to respond to what she presented to me. When we had our weekly reunion to share information, I did not mention the sister’s plans about attending the funeral as no dialogue had been possible. She then rose to speak and told me that I had ‘forgotten’ to mention the funeral in the agenda of this week. I answered gently: ‘Very good, you can explain your projects to the community, as you have made them without me’. She did so and went to the funeral as planned.
You may say that this is a quite respectable example. Of course, it is not the most extreme example and there are much more serious ones, even in my own community. But ‘the eighth degree of humility is when a monk does nothing but what is sanctioned, the common rule of the monastery and the example of his elders.’ (RB 7.55) Nothing? That is quite something!!! 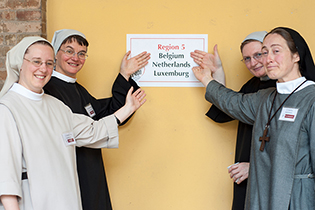 It is true that a coenobitic monk has decided to live in community UNDER a rule and an abbot (see RB 1.2). I like to stress ‘UNDER’. The monk choses to live UNDER. That does not mean that he has no longer the right to stand upright and be responsible. Listening with the ear of the heart implies the whole person. We cannot listen with the ear of our heart if we are not unified within the different dimensions which form our humanity: body, psyche (that is our emotions, our feelings, our affections and our intelligence, imagination and will) and the deep heart. ‘The deep heart is neither emotion nor affection nor feeling. It is neither psyche nor intellect or reason. It is situated at quite another depth.’[1]  It is the centre of our being, the place of our decisive choices[2] and of God’s mysterious actions[3]. It is the place where you meet God. Many spiritual and mystical authors have tried to bear witness to this place, giving it different names, depending on the age and also on their feelings and personal experiences. I am using here the vocabulary of Simone Pacot who developed a spiritual education called ‘evangelisation of the depths’. Let us not put too much weight on this; what I want to say is that man in his entirety is composed of the different dimensions of his being: the physical/biological dimension, the psychic dimension and the spiritual dimension. In every person who is more or less balanced these dimensions are called to be a unity. The whole of the monastic tradition presents such a unity as the essential characteristic of a monk. ‘Monk means unified: he who has not yet found a unity in himself is not yet unified, he is not yet a monk, even if he lives in the most isolated monastery’, affirms Ignatij Briančaninov, one of the many witnesses of the oriental tradition.[4] This unification is also very important for the interior listening which, in our Benedictine tradition, is rendered as the listening with the ear of our heart. This authentic interiority cannot be lived if the person is not really upright. Living UNDER cannot express itself in a correct way if one is not unified and upright.

While the eighth degree of humility demands that ‘a monk does nothing but what is sanctioned by the common rule of the monastery and the example of his elders’ (RB 7.55), this does not imply an unhealthy adaptation which would not dare to show the unique identity to which every person is called in a non-exchangeable way. Only through this unique identity which can be lived by none but myself will I be able to live under a rule and an abbot. With everything that I am, really EVERYTHING, I choose to enter into the rhythm of the community, and I do this with my heart as well as with my feet and my head. I renounce not my unity, but perhaps my ‘singularity’. He or she who dares really to be himself or herself has no need of eccentric behaviour. The eighth degree of humility reminds us of reality. Basically humility and reality are very close. To follow the common rule confronts us with our own reality. Our unification has nothing to do with our ‘peculiarities’; it guides us back to our most personal and intimate relationship with God, who has called us by our names. It is a process which leads not to self-denial but to self-discovery. 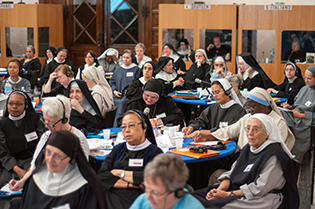 It is obvious that a superior cannot support projects and activities that she does not know about. Listening with the ear of the heart implies the word - at the right moment, in the right place and in the right manner, as St. Benedict also teaches us in his chapter on impossible tasks. Once a superior has vanquished the temptation of power, she must also vanquish the ambiguity of silent maternity ‘not wanting to disturb’, ‘in order not to get involved in things that do not concern her.’ The service of authority must find the courage to propose ways of conversion and must try to correct ‘with love’. For St. Basil, to correct a brother was an act of mercy, because caring for the health of a member was caring for the health of the whole body. Evil and scandal are inevitable: the community that is capable of carrying the sick brother or sister with love, but without nurturing sin in him or her, puts the mystery of the cross into practice. The sin of my neighbour can be the place where God’s mercy towards the sinners becomes visible. It is the place from whence the mission of love reaches the world, bear-ing witness to God’s gift love and of the capacity of grace not to give way in the face of evil.[5] Obviously, we do not always deal with evil or sin, but if the superior dares to use words, starting with listening with the ear of her heart, she will also invite her sisters to do the same. Much too often we keep silent for peace’s sake, but perhaps a healthy monastic life invites us – today even more than ever before – to dare to express ourselves and speak to each other, without ever forgetting to listen deeply, while being open to recognizing the different and unique identity of each of our sisters who have been given to us on our path of life.