We have 135 guests and no members online

Mysticism and Fraternal Community in Christ

Mysticism and Fraternal Community in Christ

An address to the General Chapter of the OCist
Assisi, 16th September, 2014

The Abbot General of the Cistercian Order points out the importance of discernment in accepting novices, and the care needed for their formation if they are to contribute to the unity of the community and its apostolate.

In the last four years that I have been Father General, I have often had to give a report on my ministry and the state of the Order. Thus my visit to your General Chapter is a special occasion for me to give an account, if not of the hope, at least of the real situation of the Order and its journey towards… eternity. I no longer say ‘towards the future’ because, in these last years, and I have often expressed it, the temptation to ‘guarantee our future’, and to ‘assure our future’ is a snare. Not only precarious communities that say, or of whom it is said about them are ‘without a future’, but especially those who believe they ‘have a future’ are prone to the same misconception. It is the ‘foolishness’ that Christ condemns in the rich who judge that they have a future because their storehouses are filled with plenty (cf. Luke 12.15-21 ). Often the storehouses are filled with grain marked for consumption and not for seeds. This is the past and even the present, one stocks, arranges, and freezes in order that the future can live from the past; consume the past, by way of a sterile and egotistical present, a present without seeds, so that the grain can’t fall into the earth, die and bear fruit. ‘You fool, this night your soul will be demanded of you; and the things you have prepared, to whom will they belong? Thus it will be for one who stores up treasure for himself but is not rich in what matters to God.’ (Luke 12.21).

I am under the impression that, actually, our Orders and communities are often faced with this temptation and are content with minimum assets: ‘happily we are still … we have enough ... to end our life in peace’. There is a temptation to ‘gather for ourselves’ and not for others or what matters to God. In the early part of July, at a Synod of my Order, while expanding an intervention requested for the Service des Moniales de France on monastic life 50 years after Vatican II, I pointed this out. It is also in Evangelii Gaudium of Pope Francis. I believe that there are two essential spheres where our communities have become fragile, precarious, which has nothing to do with the number, the age of the members, nor the economy. These two spheres are the mystical dimension and the fraternal community dimension of our monastic Cistercian charism.

I said that ‘it is essential to recover the mystical dimension at the heart, or rather at the source of our vocation. Mystical does not mean escape from reality but being aware of the total reality and consequently, placing at the centre of our life and our heart a relationship, an experience of God. (…) In observing communities, their manner of celebrating the liturgy, their community life, at times I ask myself the question: Are these people Cistercian for the love of Christ or for another reason? Are they really encountering Jesus? Have they a vibrant relation with Him? Do they live by Him, with Him and in Him? Cistercian mysticism is biblical, liturgical, patristic, communitarian, Eucharistic, human, spousal, filial, fraternal, and communion. We must exert ourselves to rediscover this source of life, to live our vocation and be authentic witnesses to Christ in the midst of the world. We must endeavour to transmit this to the young, otherwise we take advantage of their liberty. If we have vocations and keep them by exploiting superficial motives by which the young sense an attraction because of their narcissism, formalism, or clericalism, that means that we also have no profound reasons to follow Christ. Only profound reasons make possible perseverance and a fruitful and joyous fidelity that has no need to seek other compensations to fill the void.’ (www.ocist.org, Synode de l’OCist 2014 Conclusions du rapport de l’Abbé Général)

Because of this, I am happy to have proposed here, three years ago, that our Orders commit themselves to promote the cause of Saint Gertrude of Helfta as doctor of the Church. I admit that when I proposed this initiative three years ago I did not fully know what I was doing. It was especially due to your positive reaction and the enthusiastic and solid involvement of your delegates, as well as those from other Orders, that the cause, more or less has made headway. But especially this has allowed me and many others to become aware of the real importance of our mystics for the life of our community and for the Church. I believe that today the Church needs to rediscover herself as the Bride of Christ, and acknowledge from this union her true beauty, her authentic integrity, and her maternal and fraternal passion for the salvation of the world. The mission of monastic life in the Church is to keep her lamp burning as she awaits and loves Christ in order to be united to him.

The second preoccupation that I have in regard to my Order is the lack of community spirit in the monasteries. There it is not the numbers that matter. Besides, numbers were never something that mattered in the Church. When numbers are important, then our Saviour and unity in Him no longer matter. Also on the part of the Holy See, sometimes there is an impression that ‘how many are there’ continues to be more weighty than the fact of ‘being united in Christ’. Now the Christian community is defined by reunion in his Name which guarantees his Presence.

I say this, because I am aware that judging the precariousness with worldly standards, material gauges, and not with Gospel principles, the measure without measure of the love of Christ and faith in Him leads us to false solutions that do not bring about the Kingdom. In the Christian vision, it is not a blunder to die, provided that we die as a seed of the Kingdom. Thus, at least in my Order, we greatly need to help and support each other especially among Superiors. When that comes about, I see communities able to die in the festive colours of autumn and the joy of the harvest. Then winter will come with the hope of spring however that may happen.

Often the problem in many communities is the loss of the sense of what community means, they exist in a serious lack of unity, not only among brothers and sisters, but in the life of the community itself. That is where the lack of mysticism engenders a lack of unity in the community. We are free and fruitful only if, in our life and our vocation, we do not lose sight of the centre of unity. There we can reinstate everything, even those things, both internally and externally, that divide us. A good monastic community is not a community of angels, but of men and women who help each other to bring everything to unity in Christ. It is not a good community where one is formed perfectly in one aspect of life and vocation but not in the unity in Christ in all the aspect of life and vocation. The worst monasteries are those where one prays well but all the rest is badly lived (fraternal life, work, rest, etc.). Others work well but pray badly. It would be better to do everything badly, but aware that all can find their unity only in Christ rather than having the illusion that they are living out their vocation in doing one aspect well and neglecting all the rest. That proves that Christ is not the centre of their whole life. 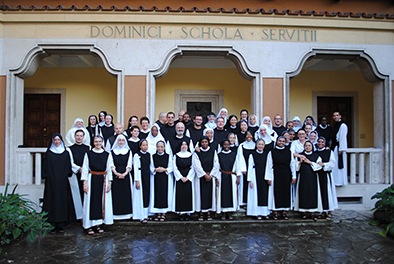 I am concerned about the attraction some communities have on the young when they attract them by one particular aspect of monastic life and not the global experience of communion with God and with their brothers and sisters. Because of this, I see a great need for total formation which will not only be intellectual, spiritual, or economic. I am aware that the most effective and fruitful moments and means of formation in the Order are those allowing the participants to live for a time where they have an experience of total formation, that is to say, in a milieu of communion with God along with fraternal communion centred in Christ. That is what we try to offer for the last 14 years, in the course of monastic formation at the Generalate that takes place for a month each year. A good dozen of OCSO nuns as well as many Benedictine monks and nuns have taken part in it. This is the goal that we plan with the Course for Superiors that we organize every two or three years which seems to foster meetings of Superiors by region or language. Apart from that, even if it is little, I see only sterile tensions around a possibility which is only a dead grain, dead in the storehouse of the  fool from the parable that I quoted in the beginning. A sterility that is serious in relation to the urgency of salvation and life that the present world is crying for and our Holy Father underlines.