We have 59 guests and no members online

Trappists in the Democratic Republic of Congo

What has Happened to the Monastery of Mokoto? 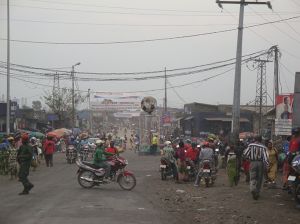 The Trappist monastery of Our Lady of Mokoto was founded in 1954 by the Abbey of Scourmont (Belgium). The foundation lies 90km from the town of Goma in the Province of North Kivu in the Democratic Republic of Congo, one degree south of the equator. At the present time it takes more than four hours to get there from Goma on a very bad road. It is at an altitude of 1,800m. The hills are covered with cow pastures. In 1988 it became a major Priory, and the community grew steadily to more than 20 monks. In 1996 there were twelve solemnly professed African monks.

However, for the last 12 years the region of the Great Lakes has been more and more troubled. On the 10th and 12th May 1996 the community was threatened by rebels and compelled to flee. The monastery was pillaged, furniture, windows and doors, plumbing, pipes and cables, water-tanks and machinery, roof-coverings and pavingstones, tabernacle and altar, even the two bells of the church, everything was plundered or destroyed. On the top of the hill a few years later there remained only great walls of stone with holes for windows, a grim and blind building. 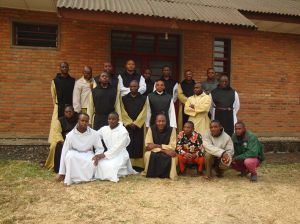 Some of the monks dispersed to other monasteries and religious houses: Scourmont, San Isidro (Spain), Rome and Frattocchie (Italy), Latroun (Israel) Koutaba and Obout (Cameroons); others remained in the little house of Keshero, near Goma. There, from 1999, began a regrouping. As a provisional monastery a dormitory, then a kitchen and refectory and a scriptorium-library were added. With the postulants who arrived the community exceeded twenty monks. This exile was to last 15 years (1996-2011).

During these years one question continued to be asked: should we return to Mokoto and when? Should a new piece of land be bought, nearer Goma, for building a new monastery? Should we remain at Keshero? The third possibility was gradually eliminated, for in 2002 the volcano Nyiragongo let out an important stream of lava which destroyed a third of the town. In a single night 600,000 inhabitants crossed the Rwandan frontier. They returned and many rebuilt beside Keshero, so that our little suburb is now swamped in the great town. There was no longer a question, for Trappists vowed to solitude, of remaining in the town. 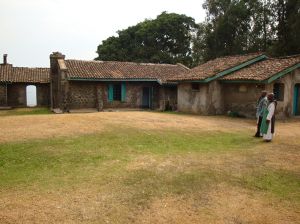 The second possibility, building on another piece of land, has never received a real answer, partly because a new start from zero was more difficult, partly because meanwhile Mokoto and the surrounding area had become calmer. We had never really turned our backs on our original place of foundation. We began again to explore the field. In 2003 we replaced the herd of cows and began to make cheese and sell it each week in the town. So the decision was made to go back up to Mokoto. While the brothers were still at Keshero (Goma) a firm began renewing the roofs at Mokoto, where it rains every day. Then the scriptorium- library. At one time there were 12,000 volumes, of which 4,000 were saved from the plundering in 1996. Another 2,000 were added, many being a gift from the Dominicans of Paris. Two sides of the cloister were renewed, one as the dormitory which became a suite of cells, the other as offices.

The 18th January, 2011, is an important date for our community: ‘when the Lord led back the captives to Zion, it seemed like a dream. Then was our mouth filled with laughter, on our lips there were songs.’ The monks went back up to Mokoto, accompanied by plenty of friends who were determined to be present on this day and to participate in the eucharist and the festal meal. We are renewing our monastery, empty for 15 years. In the renovated buildings we have provisionally installed a little chapel, a kitchen and refectory. Work on the church advanced and was completed in August 2012. Our bishop, Mgr Theophilus Kaboy, solemnly blessed it on 20th August. The monastic office is sung again in this place, deserted for so long, and for the first time the monks sing the psalms from choirstalls.

What of the renovations at the end of 2013? They centre on a second cloister with a chapter-room, refectory, kitchen, guest-quarters. For their part, the brothers of the community have no scarcity of work. The herd of vows is increasing and we make cheese each day. We have re-planted the banana-orchard, destroyed by an epidemic which affected the whole region; we tend a vegetable garden. Formerly each person had his own activity, and the noviciate looked after the garden and the fields. Today, twice a week the whole community works for the full morning, when almost everyone works in the fields: maize, cassava, fruit-trees, market-gardening, lawns. The less robust brothers stay in the kitchen to strip beans or filet fish. Lake Ndalaga which stretches 7km in front of the monastery provides tilapias for fishing; the war did not spare the hippopotamus which have completely disappeared.

The rhythm of life approximates to what it was before the exile. We have Vigils at 3.30 in the morning and the day finishes with the meeting (or ‘chapter’) before Compline. There is no lack of postulants, one novice and four young professed, 21 solemnly professed, of whom two are studying in the diocesan seminary, two are chaplains to Trappistines, and six others absent for various reasons. Add also that three more made their stability at Scourmont and two are superiors of other communities (Koutaba in the Cameroons and Victoria in Uganda). Of course the security of the region is not guaranteed. In our diocese there are more than 35 different rebel groups. In May 2012 the rebellion of M23 clashed with the regular army on the hills near the monastery. In February 2013 the little town of Kichanga, visible on the horizon on the far side of our little lake, underwent a severe bombardment: the regular army was dislodging an armed faction, with a certain number of deaths among the population.

But life must continue. The essential thing for the brothers of Mokoto is to live their monastic life, in the continual search for the Lord. They know that they are not perfect, but they do their best to live a truly fraternal life in prayer, reading and labour. They want to follow Christ who said, ‘Whoever loses his life for my sake and the Gospel, will live.’