We have 143 guests and no members online

At the present day, even if the Ivory Coast is progressing towards peace, the town of Bouaké bears the scars of war. Many of the public buildings have been destroyed and the social infrastructures have been devastated. For several years the monastery of Bouaké has been attempting to set up a medical centre (dispensary and maternity clinic) which could bring help to the 20,000 people who live round the monastery of Benedictine nuns, and no doubt further afield. An association in France is supporting the project. An NGO has been set up at Bouaké, health authorities of the town are delighted that the realisation of the project has got so far in the difficult circumstances, in which the medical needs of the population are so great. For the moment the work has stopped because of the defection of a financier who had undertaken the financing of part of the work in return for the installation of a factory on the land of the monastery. The cost of what still needs to be paid (building, interiors, material and setting-up) is reckoned at 90,000 Euros. 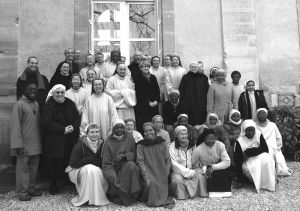 From 16th to 20th May twenty-five monks and nuns took part in the first session of the Ananias Course for formators of French-language monasteries. The course occurred in different monasteries of France and Belgium. There were 14 nationalities represented, with 17 Benedictines and 8 Cistercians.

Why was the course named ‘Ananias’? Ananias was the Christian of Damascus sent by the Lord to restore Paul’s sight after his vision of the Risen Christ. A disciple of Christ, deeply rooted in the Jewish tradition, it was Ananias who initiated Paul into life in Christ. He confirmed Paul in his vocation, freed him from blindness and imparted to him the Spirit by laying hands on him. He introduced him into the community by baptism and participation in the Supper of the Lord. The role of Ananias to Paul resembles that of the novice-master to his charges. In any case he has plenty of instruction to give.

The spirit of this formation was centred on the Word of God and the experience of a fraternal body helped by the richness of diversity and the peculiarities of different communities in the 14 nationalities represented, creating the experience of a transformation, of transition to learn and live the service of a formator in each person’s community. This is a path which is not without links to the Passover of the Lord, a need resolutely directed towards the Essential.

It seemed important to show the participants different monastic profiles in the several communities which welcomed them. In addition, some fraternal visits to brothers and sisters in the neighbourhood of these communities brought a supplementary richness (Chevetogne, Maredsous, Bouzy, Taizé, Ligugé). Details of the three months:

16th Feb’ to 22nd March: Scourmont ,‘passing on the tradition’

5th May to 20th May: Martigné-Briand, ‘grasping the tradition anew’

This experience of three months could not leave untouched the participants or anyone concerned in the programme. Many others were affected by them too. A new future is beginning.