We have 141 guests and no members online

Liturgical Life and the Word of God

Liturgical Life and the Word of God

LITURGICAL LIFE AND THE WORD OF GOD

Is there such a thing as a monastic liturgy? ‘Yes and No’, replies the author. ‘Yes’ because of the shared aim of monastic life and the Word of God. ‘No’ because the liturgy is above all the prayer of the Church. The subject would never have occurred to me in these terms. I was asked to grapple with it. Once I was compelled to reflect on it, I finally found it fruitful. Nevertheless, this essay requires a certain indulgence. 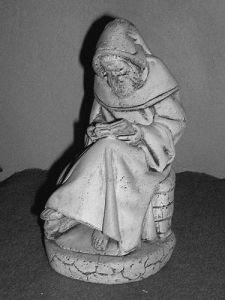 Does a monastic liturgy exist?

‘Monastic liturgy’ is a common expression, as though it was self-explanatory and needed no unpacking. Nevertheless it is possible to discern that it attempts to express the special way or ways in which monks celebrate the official liturgy of the Church. This is straightforward and normal, just as in the case of other communities (parish, domestic, charismatic, cathedral). In this sense a monastic liturgy certainly exists.

But only in this sense, for it must be remembered that the liturgy cannot be reduced to its celebration and its expression. First and foremost it is the invisible mystery of the Trinitarian work of salvation, initiated by the Father, realised in the Passover of the Son and actualised in the Spirit’s prayer of epiclesis, and offered equally and identically to the People of God, the baptised, laity, priests and monks. The Word of God, also, proclaimed in the assembly, has only a single voice. It is shared by ‘the many’. In this sense there is no such thing as a specifically monastic liturgy.

The Eucharist in concentric circles?

Christian liturgy has the genius of expressing and imprinting invisible realities in a visible and audible ritual. However, if it is superfluous to distinguish two aspects – the Mystery and its celebration – it is just as necessary to insist that the two are not strangers to each other. Still less should one posit any opposition between them, for fear of holding a somewhat intellectual approach to the liturgy.

This is the situation – and admittedly it is fairly widespread – in a certain number of monastic communities where a mentality is to be found, often implicit but sometimes even explicit, by which the monks ‘open’ their ‘conventual Eucharist’ to the laity, guests and visitors. The classic topology of their church – sanctuary, choir and nave – runs the risk of suggesting the existence of three assemblies, a little island reserved for concelebrant priests, a close-packed circle of unordained monks, and the more distant ranks of the laity. Sometimes other signs of segregation are added, when the laity are deprived of communion in the chalice, and even – an extreme, but well-known situation – when the congregation is clearly instructed not to join in the singing of the monks.

However, the Word of God during the Eucharistic celebration is not limited solely to the proclamation of biblical texts. It must be incarnated not merely audibly but equally and especially visually in the flesh of the Body of Christ which is the assembly. What is more, the Word must be given every chance to be near, so that it is not necessary to seek it above, in the heights of heaven nor below, beyond the horizon, since it is ‘very near to you, in your heart and in your mouth’ (Deuteronomy 30.14).

Can monks have a private liturgy?

So far we have taken the necessary step of recalling the important distinction – though not an opposition – between the mystery of divine grace, in the invisible heart of the liturgy, and the work of the Church in expressing it in the audible and visual rites of celebration. According to this fundamental approach there is no specifically monastic liturgy. This conviction, shared by all monks and nuns of Christian monasteries, can – often quite unintentionally - be obscured by somewhat elitist ways of celebration. We simply point this out, without any further intention.

These reflections have applied exclusively to the celebration of the Eucharist, the most central celebration for every Christian, and one which most commonly draws together monks and their guests, their faithful friends and their occasional visitors.

In monasteries, however, liturgical life consists not only in the Eucharistic celebration, even if this is its source and high point (fons et culmen). There is also the Liturgy of the Hours, which monks celebrate from three to seven times a day (and often in the night), every day of the week, every week of their lives. In this long-term experience the laity do not regularly participate, leaving the monks to celebrate ‘in splendid isolation’ for most of the time. Does this mean that monks can claim the legitimacy of a specifically monastic liturgy? The affirmative answer is linked to the partnership which monks have with the Word of God. Their privacy is primarily and continually filled with the sovereign Word: they co-habit with It.

The Partnership of Monks with the Word of God

The Liturgy of the Hours, which marks out the rhythm of days in the monastery, is composed overwhelmingly of readings from the Old and New Testaments, with a preponderance given to the Psalms. A more modest part is allotted to readings from the Fathers and from spiritual writers of the following centuries. Still more modest is the part of the hymn, the brief responsory and intercessions. This near-monopoly of the Word of scripture in their prayer-life necessarily implicates monks in a strong partnership. This has three principal features.

1. The impossibility of evading the Word

Lay people, whose vocation does not necessarily draw them to praying the Liturgy of the Hours, are free to compose celebrations which appeal to texts, witnesses and songs whose language is not strictly biblical, even if their inspiration must bring them close to the Word of scripture. There is no suggestion of spiritual inauthenticity in this process. They can of course run the risk of expressing a passing idea of a moment or of particular individuals rather than being ‘marked by the transcendent surprise’ of a word not chosen for its obvious convenience. By contrast, it is unimaginable that monks, day after day, week after week and year after year should compose liturgical offices to accord with peaceful or disturbing events in the life of the community, and still less according to the wide variety of spiritual or mental experiences of the brothers.

In any case this practical impossibility is less strong than the ‘decision of Faith’ of the monks, by which they open themselves every day to the Word of scripture, whose texts have been chosen and organised by factors outside themselves, according to objective criteria of the liturgical tradition, which sets out to read our history (and our histories) in the light of Sacred History (and turbulent movements) of the God of the Alliance which binds us to this day. This listening is ascetic, but so salutary! Monks sign a charter of fidelity to the sovereign Word. There is no evading it.

2. A loving reading of the Word

In the monastic tradition this is called lectio divina. It characterizes those who are searching for God, for the Mystery of his living Person, starting from, through and beyond the texts of scripture, and especially those which are proclaimed in the course of the Hours of the office, fairly many of them (sometimes perhaps too many), sometimes proclaimed with insufficient clarity, sometimes falling on a distracted ear, sometimes received with a sleepy heart. Hence monks must always be vigilant, must take themselves in hand, take into their hands the treasured pearls to avoid them slipping through their fingers like grains of sand.

Such vigilance must also be the task of the lay faithful at the Sunday Eucharist. In short order (the liturgy of the Word) they are submerged by several biblical readings without being prepared for them during the previous days, without their celebration obtaining for them silence and interiorisation, without having leisure or desire to assimilate them during the following days. This is a question which demands the serious attention of the pastors of the Church, in order to give a new impetus to the liturgical renewal of Vatican II. Without such a persevering search for the meaning of scripture – what might be called the acquisition of a biblical culture – the liturgical space risks becoming an island, what young people call ‘another planet’.

By contrast monks give the impression that the liturgy is their second nature, that they live on it not as on an island. It even seems that the liturgy seeps into the monastery and marks daily life by its ‘style’. Is this a privilege? Indeed it is, but it is laboriously acquired by forcing oneself to an apparently unproductive leisure (otium) for God. But talk of usefulness has no place in those who allow their hearts to burn, in solitude and love, for Him who is the living Word, a hidden treasure patiently discovered, for which one must give up everything. ‘Prefer nothing to the love of Christ’ (St Benedict’s Rule for Monks). For a community which is quietly faithful to this loving search for Him who is Word of life, peace and blessedness, the monastic liturgy brings no surprises.

3. Spiritual Combat with the Word

A third partnership of monks with the Word occurs in the night hours given to the Psalms. An old monk once said to me, ‘On the whole the Psalms are unbearable. We should not even try to make them bearable by exegetical commentaries or by Christian interpretations. They are words of the night: they speak of our struggles in the night, and it is in the night hours that they become luminous.’ It is true that formerly the liturgy reserved the more attractive Psalms for the day offices, leaving the rougher ones as a sort of job-lot during Matins. Nowadays the reduction of Psalms at Vigils (sometimes anticipated the previous evening) and the apportionment of the Psalms over two or even four weeks has led to the insertion of more demanding Psalms into the day Hours.

Nevertheless, the suitability of the night for accepting a certain number of Psalms should not be taken strictly of the night hours. It is symbolic, and should be understood as a parable. An Advent hymn suggests very well what sort of spiritual combat is at stake: the weight of our interior poverty, the bitter awakening of our wounds, the piercing attack of doubt, the asceticism of unfulfilled desire for God,

See now the time of long Desire
When all our poverty appears.
Why then this absence in the night,
The weight of doubt and all our wounds,
If not to cry more ardently,
To live more fervently in hope?

Those elements which in daylight allow us some evasion – our skills, our conversations, our worthwhile activities – lose their force in the silence and solitude of the night. They are nothing, but they do not go away. Psalm 72 is a luminous companion for our nocturnal struggles:

How good God is to Israel, to those who are pure of heart.
Yet my feet came close to stumbling, for I was filled with envy of the proud.
I strove to fathom this problem, too hard for my mind to understand.
And so when my heart was embittered and when I was cut to the quick,
I was stupid and did not understand, no better than a beast in your sight.
Yet I was always in your presence; you were holding me by my right hand.
You will guide me by your counsel, and so you will lead me to glory.

Monks do not appreciate soothing prayers, free from combat. But the Word of the Bible does not shy away from combat. Hence their ardent partnership with it.