We have 283 guests and no members online

MONASTIC FORMATION IN THE CISTERCIAN ORDER

On the broad esplanade of the Basilica of St Mary of the Angels at Assisi men and women clad in a white tunic and black scapular are taking an evening stroll. Some emerge from the Franciscan Hospitality Office and make for the revered sanctuary sheltering the Portiuncula, where St Francis lived and was cared for right up to his death. Others take time to share experiences of the meetings on the life of the communities. Others simply relax after a long day’s work.

The General Chapter of the Cistercians of the Strict Observance took place there from the 6th to the 29th September, 2011. It was a historical meeting, for the two Chapters, male and female, known as a ‘mixed general meeting’, had just become a single entity, bringing together the 105 Abbots and male Superiors with the 78 Abbesses or titular Prioresses. Their discussions focussed on formation. This Bulletin is the echo of these lives muffled in silence. Nevertheless, it is not impossible to present its main lines and to enter into the secret life of these communities. 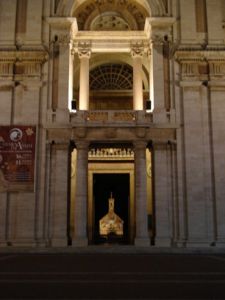 Our analysis traverses three porticoes. The design of the Basilica perfectly illustrates these stages on the spiritual journey. First, resolutely cross the porch and go forwards as far as the Portiuncula, stopping in front of the icon of the Annunciation.

We should begin by investigating the history of this building, gradually constructed between 1569 and 1679 in honour of St Francis. Built in the baroque mannerist style, it was partially destroyed by an earthquake, rebuilt in 1836-1840, transformed into a neoclassical style, and then the victim of another earth tremor in 1997. The visitor who enters the Basilica makes for the Portiuncula, a fragile wooden structure marvellously preserved. St Francis used to come there to pray, and lived there beside the Transitus, a dispensary where he died in 1226. On the wooden wall of this chapel hangs a remarkable representation of the Annunciation: the angel kneels before Mary who is sketching a delicate gesture of acceptance and at the same time recoils before the greatness of the mystery which is being proposed to her. 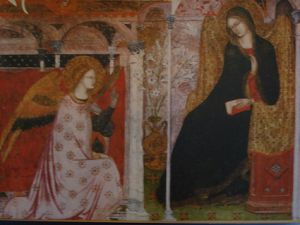 The virginal vocation of Mary, Mother of God, so honoured by Cistercian nuns and monks, encapsulates the mystery of grace which is contained in every monastic vocation: initial grace, the joy of a beginner. The Portiuncula in its turn is the sign of a life of prayer which depends wholly on silence, poverty and humility, making no distinction between physical and spiritual health, as the Transitus witnesses. Indeed, the Basilica can be seen as the incarnation of every monastic community by its buildings, its history moving across the centuries, its constant need of reconstruction and restoration. At every age and at every moment of life, conversion is composed of many facets, and, under the inspiration of the Holy Spirit, receives the name of ‘formation’.

Furthermore, it is a great joy to be able to present so many revered contributions, a discernment for our time, living witness of these communities spread over the whole world. This includes the two papers of Dom Eamon Fitzgerald, Abbot General OCSO, on the continuous formation of the superior and the state of the communities, the paper from Dom Mauro-Giuseppe Lepori, Abbot General OCist, on the Rule of St Benedict, a proposition of humanity. There are also the perspicacious notes of Dom Patrick Olive, Abbot of Sept-Fons, on the experience of formation. The different stages of formation are explained in turn by several Superiors of communities: candidates, continuous formation, the community, the superior. It is important to stake out fixed points, to transmit life, to form unity in the truth ‘so that Christ may be formed in everyone’ (Galatians 4.19). The moving witness of Dom Armand Veilleux, Abbot of Notre-Dame de Scourmont, contributes ‘A Visiting Card of Tibhirine’ a memorial of the week which he spent there with the monks, 12th-19th January, 1996.

Father Timothy Wright, OSB, of Ampleforth Abbey, presents the challenge and the promise of dialogue between Islam and Christianity, the product of a meeting with Iranian Shiite Muslims. Other reports come from Africa and Amazonia. Each of the communities mentioned passes in its own way through the three porticoes of the history of the community, of the daily work of renewal, of the continual grace of beginning, received with the support of Mary, the Mother of God.