We have 300 guests and no members online

THE JUBILEE OF AIM

Fifty years of life, the hundredth number of the Bulletin! These must be celebrated; they cannot be passed over in silence! The whole arc of time must be retraced, seven times seven plus one year. The span of time leaves us no choice! The festival demands it: how could we fail to rejoice?

We are deep in biblical logic, for it is the Bible which has formed us in this respect. The Bible has taught us the meaning of an arc of seven. Just as each week we celebrate a day of respite and liberty called the Sabbath, in the same way the pause of a sabbatical year was introduced every seventh year, when the creation was respected and released from all its usual tasks. Still more remarkable was the event after seven times seven years: the fiftieth year is called the Jubilee Year.(1 )The words ‘jubilee’ and ‘jubilation’ derive from the Hebrew yobel in Leviticus 25.10:

You will declare this fiftieth year to be sacred and proclaim the liberation of all the country’s inhabitants. You will keep this as a jubilee: each of you will return to his ancestral property, each to his own clan. 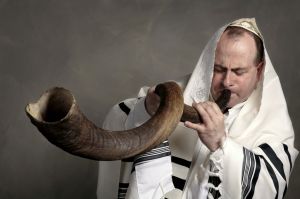 Yobel means literally ‘ram’ or ‘ram’s horn’ (see Jos 6.5). At the proclamation of the jubilee year a ram’s horn was sounded (Lv 25.9, ‘you will sound the ram’s horn’), and that is without doubt the origin of the expression ‘jubilee year’. When St Jerome set about translating this passage he created the Latin word jubilaeus and then defined this year as ‘a year of restoration’ or ‘of pardon’, remissionis annus.

Both in the Bible and in Judaism and Christianity a year of yobel or jubilee year is traditionally a year of conversion and renewal in spirit, an occasion of reconciliation, when all broken relationships are mended, whether this be with God or with the neighbour, with the earth or nature, or even oneself. It will be remembered how in the synagogue of Nazareth Jesus opened the scroll of Isaiah and proclaimed ‘a year of favour’. The context shows that this will be a year in which captives are given back their liberty, in which the blind recover their sight, in short in which ‘the good news is proclaimed to the poor’ (Luke 4.17-19; Isaiah 61.2-3). On the occasion of such a year, sabbatical squared (7 x 7 + 1) everything stops, to give an opportunity for reflection, for giving thanks and for pardoning. Debts are remitted, enslaved brothers are set free, alienated property is restored. We are given an extremely powerful glimpse of the priestly tradition: every fifty years a general restoration is proclaimed in the name of God. To continue to read these lines is to continue to be aware of the importance of restoration and pardon as something more important than all the rights acquired at the expense of others. Nothing lasts for ever. Because God is God, the Master of all time, the Law commands that from generation to generation a life that has gone astray for all sorts of reasons, a famine, a premature death, an epidemic, should be restored. Only God can guarantee continuity from one generation to another!

So no ‘jubilation’ without conversion, no jubilee year without the restoration of human relationships within a community or between different communities. As the year 2000 approached, Pope John Paul II made sure of improving relationships with other Christian communities, both Orthodox and Protestant. Effectively the great schisms in the Church occurred in the course of the second millennium. At the same time on the political level efforts were made to lessen or cancel the debt of poorer nations. This biblical vision is amazingly more powerful than all the healing measures that our modern society is capable of suggesting.

This, then, is a first message. In the fifty years that AIM has existed, with its evocative three letters, indicating a readjustment of the organism to new ways of relating between communities of different continents, the question has been urgent: what new liberty can be created in the bonds which join us together? Where is the biblical text pointing from a consideration of the five decades of years of service? What ‘good news’ for which ‘poor’ has priority today?

‘Jubilation’, an inexpressible and unlimited joy

However, ‘jubilation’ in our modern languages means to celebrate and express exuberant joy. Joy is, then, perceived above all as an amazing obligation! The Latin vocabulary of Fathers like Hilary and Augustine makes much of terms such as jubilare, jubilatio, jubilus. By these terms they express a certain kind of joy, both interior and exterior, manifested in cries and songs by which the frontier between interiority and exteriority is abolished. In the musical sphere the term jubilus means an extension of the last syllable of the Alleluia. The biblical root of these terms is plain to see.(2)

However, in the modern world we have largely forgotten that jubilatio means a chant of praise which almost goes over the top. In this jubilatio the words are no longer pronounced – there is only sound! In Gregorian chant, for example, the verse suddenly moves into a crazy series of ‘o’ and ‘a’. The charismatic movement has recovered something of this when it invites us to ‘pray in tongues’. This enables us to give shape to something beyond words. In his commentaries on the Psalms St Augustine expressed this more than once with regard to the precise moment of the prayer of praise: ‘Stop worrying about finding adequate words, but sing in jubilation!’ Thus, commenting on the opening of Psalm 32, he writes,

Sing as is fitting, sing in jubilation (Psalm 32.3). This is to sing as is fitting to God, to sing in jubilation. What is this ‘singing in jubilation’? It is to understand that words cannot express what the heart sings. Those who sing, whether during the wheat-harvest or during the grape-harvest or during other work which inspires them, begin with their joy exploding into the words of their songs, and then suddenly find themselves so filled with overflowing joy that they can no longer express it in words. They no longer pronounce words or syllables but break out into inarticulate cries of jubilation. These jubilant sounds show that their heart is overflowing with sentiments that words can no longer express. And to whom is this more fitting than to the God who is ineffable, since words cannot express his nature? You cannot express what he is, but you must not keep silent. What else can you do other than jubilare, open your heart to a joy which no longer needs to search for words, expand your joy without measure, far beyond the limits of words? Sing to the Lord as is fitting, sing in jubilation.

Before you had experience of God you thought you could say what God was. Now that you begin to glimpse God you know well that you cannot express what you perceive. Jubilate then! Jubilate for the Lord your God! Do not expend your jubilation on such and such things. All these can be spoken in one way or another. He alone is ineffable. (Commentary on Psalm 99 (100).3-6).

These thoughts of the Bishop of Hippo continue over the centuries to nourish all Western Christianity. Bernard of Clairvaux writes, ‘Jesus is honey in my mouth, melody to the ear, jubilation in the heart, Jesus mel in ore, in aure melos, in corde jubilus’. Richard of St Victor links jubilation to a certain stage of the spiritual life, the penultimate step, just before that of perfection. Others follow him on this path. John Ruysbroeck, in the first part of his treatise The Book of the Twelve Béguines, describes the ascent of the soul in four stages. The first is jubilus or jubilatio, the second contemplatio followed by speculatio before the arrival at the highest stage of oerewoet or storm of love:

Then the Spirit of the Lord speaks openly to the loving heart and says to it, ‘I am yours and you are mine. I live in you and you in me.’ Under the influence of this light and of this touch, the joy and delight of the soul and the body are so great in an uplifted heart that the person cannot understand what has happened to it, does not know how to deal with the situation. This is what is meant by jubilus, what someone cannot express in words. Only one who has experienced it can explain it. This is what lives in the loving heart, open to God and closed to all creatures. From this comes the jubilatio, which is a heartfelt love, a burning flame of devotion, full of thanksgiving and praise, marked by a permanent reverent fear of God. This is the first step in the contemplative life, expressed in purity of heart and elevation of the mind to divine things, in which affective love is translated by devotion and desire into thanksgiving and praise before the face of God (The Book of the Twelve Béguines, chapter 10).

John of the Cross, for his part, places jubilation among the highest stages of spiritual growth. In his Spiritual Canticle, he defines jubilation as ‘the song of two nightingales’ (Strophe 39.8-10). The Spanish mystic stresses that at this stage a transformation occurs, in which ‘in this union the soul rejoices and praises God with God himself’. ‘The sweetness of this transformation transcends all other praise. Nevertheless, this song is still not as perfect as the new song of life in glory. But, by such an experience in this life, the soul experiences the taste for it, since the elevation of this song leaves a trace of the surpassing quality which it will have in glory.’ In The Living Flame of Love he describes this state of ‘jubilation’ at the end of the second strophe (35-36), in a commentary on the final verse ‘by granting death you have changed death into life.’ At this point transformation and jubilation become one and are fused, one into the other. In all these further considerations of ‘jubilation’ St Augustine is never far away.

In this jubilee year of the AIM, let us then make our own this fine, somewhat neglected, Latin tradition. Let our praise transcend our words as we thank him who surpasses all our expectations and works wonders in seven times seven consecutive years, and let us sing of him without limit, for he deserves no less. In keeping silent we find that it is he who inspires us. True praise takes him as its starting-point and its goal, for he is God who forms in us a praise which has no end. Joy unspeakable! Amen, Alleluia!

(1) See the article ‘Jubilation’ of Aimé SOLIGNAC in the Dictionnaire de spiritualité.

(2) The Greek uses the terms alalazo and alalagmos. In Hebrew there was the root ru‘a and re‘a with the noun teru‘ah, which means among other things the war-cry addressed to the Lord of Hosts or the shout of joy on returning from the vine-harvest. In the course of centuries this cry became more and more liturgical through its use in the temple to invoke God as king of the festal community. The texts show a progressive interiorization of the primitive cry, which eventually comes to express the faith of the community.